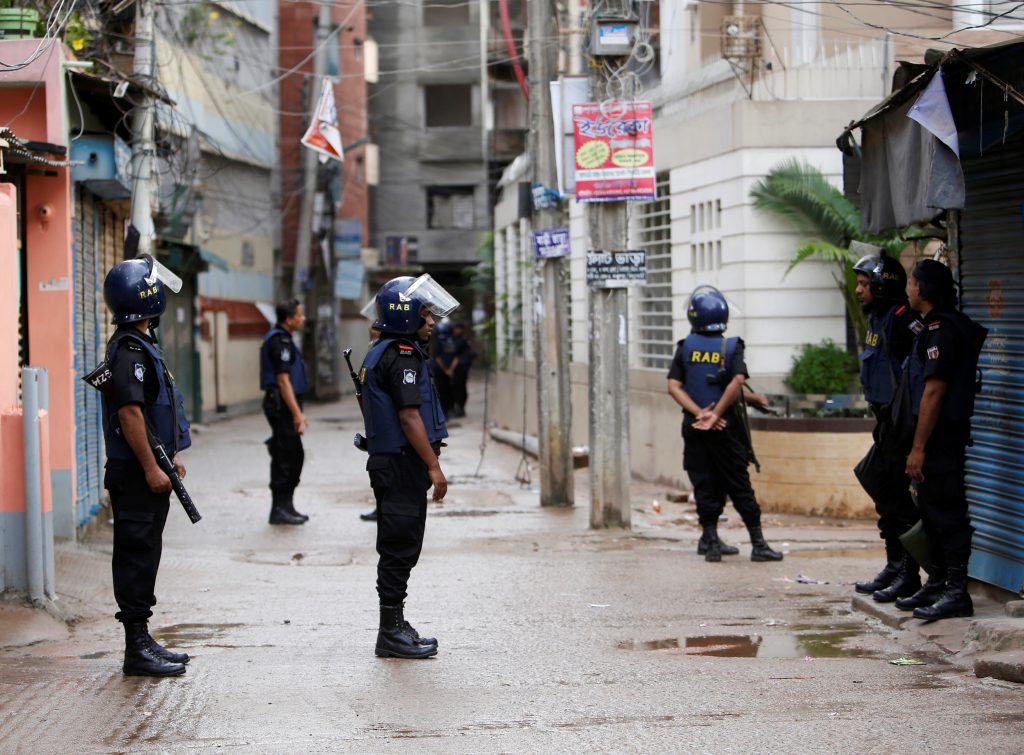 Bangladesh police on Tuesday killed nine terrorists who were believed to have been plotting an attack similar to the one on a café on July 1 in which 22 people were killed, the national police chief said.

Police said the terrorists were holed up in a building in Kalyanpur on the outskirts of the capital, Dhaka, and they opened fire on officers as they tried to enter.

The terrorists, who shouted All-hu akbar as they battled police, were believed to be members of the Jamaat-ul-Mujahideen Bangladesh (JMB), a banned group that has pledged allegiance to Islamic State.

“They were wearing black outfits, turbans and had backpacks … similar to the outfits the attackers in the cafe had,” police chief Shahidul Hoque told reporters at the scene after the terrorists were killed.

One wounded terrorist was captured, he said. “They were plotting a major attack in the capital like that in the restaurant,” he added.

Islamic State (IS) claimed responsibility for the café attack, but the government has dismissed suggestions that IS has a presence in Bangladesh.

Police said JMB was behind the attack by five young Bangladeshis on the upmarket café. Most of the 22 people killed there were foreigners.

Hoque said the terrorists killed on Tuesday were believed to have been a JMB cell.

“The militant who was detained claimed they were Islamic State members but we think they’re JMB,” he said.

Mostly Muslim Bangladesh has faced a series of attacks on liberal bloggers, academics and members of religious minorities over the past year.

While authorities have blamed the violence on domestic terrorists, security experts say the scale and sophistication of the assault on the café suggested links to a trans-national network.

Islamic State has warned that violence would continue until Islamic law was established worldwide, saying in a video that the Dhaka café attack was just a glimpse of what was to come.