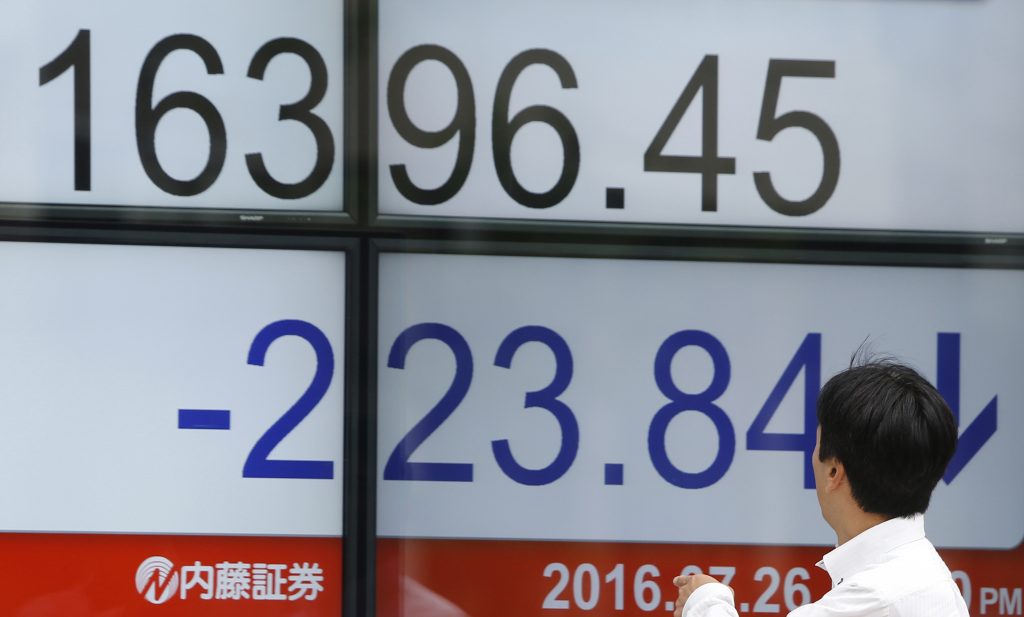 Energy stocks tumbled as the price of oil slid 2 percent, leaving U.S. benchmark crude down 12 percent this month. Chevron lost 2.5 percent and Exxon Mobil gave up 2 percent, the two biggest drops for companies that make up the Dow. The industry faces concern that growing gasoline inventories during the peak U.S. summer driving season and a steady rise in working drilling rigs will push up crude inventories, depressing prices and profits.

“After a mixed European session, U.S. markets were dramatically thrown off course by the capitulation in energy stocks overnight,” said Angus Nicholson of IG in a report. He also said that concern about U.S. gasoline stocks combined with anxiety over European banks. “Concerns about the Italian banking sector threaten to rear their ugly head again this week as all European banks undergo stress tests,” he said.

The Bank of Japan and the U.S. Federal Reserve are due to hold policy meetings this week. With Japan’s economy barely growing, economists are speculating about whether its central bank may push interest rates lower into negative territory when it announces its decision Friday. The U.S. economy is in better shape than other advanced economies, but expectations are the Fed will hold interest rates steady.

Shares in Yahoo, the original internet giant, fell $1.06, or 2.7 percent, to $38.32 after the company announced Verizon would buy its advertising, media and e-mail businesses for $4.8 billion. What little of Yahoo is left will be a holding company for its Alibaba and Yahoo Japan investments, as well as its patent portfolio. Verizon fell 23 cents, or 0.4 percent, to $55.87.