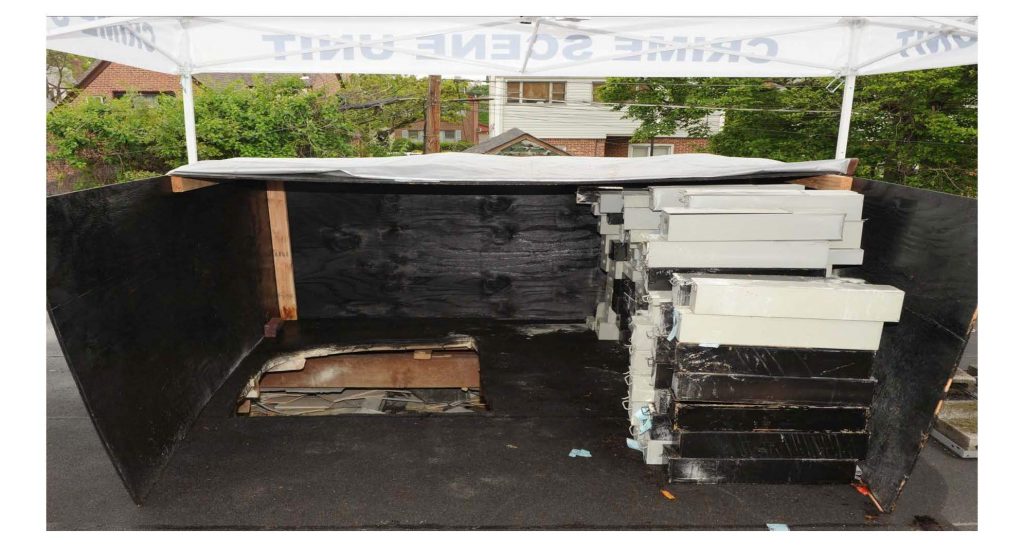 Three men have been arrested in connection with two dramatic bank burglaries that were carried out in Brooklyn and Queens this spring, in which around $5 million of cash and valuables were stolen. As NYPD Commissioner William J. Bratton said at a press conference Tuesday announcing the arrests, the burglaries were “the work of a crew that was well organized, meticulous, and elusive to law enforcement.”

At the press conference, Bratton, FBI Assistant Director-in-Charge Diego Rodriguez, and U.S. Attorney for the Southern District of New York Preet Bharara announced the arrests of Michael Mazzara, Charles Kerrigan and Anthony Mascuzzio. The defendants are charged with two counts of bank burglary and one count of conspiracy to commit bank burglary.

The burglaries occurred in April at the HSBC Bank branch at 4406 13th Ave. in Boro Park; and the Maspeth Federal Savings Bank branch at 64-19 Woodhaven Blvd. in Rego Park, in May.

Authorities have recovered some cash and some valuables in connection with individuals involved in the investigation, but it is not yet clear whether these items were stolen in the burglaries in question, the U.S. Attorney’s Office told Hamodia.

According to the criminal complaint filed by federal prosecutors, there has been a pattern of bank burglaries and attempted burglaries in and around New York City during the past several years. “These burglaries and attempted burglaries involve a crew of individuals who break or attempt to break into secured bank vaults and safety deposit boxes, generally by cutting through a roof or wall from a space adjoining the bank. The crew is believed to have included, at various points in time, Michael Mazzara, Charles Kerrigan, and Anthony Mascuzzio, the defendants, among others.”

In late 2014, the FBI set up a pole camera across the street from the Brooklyn residence of Mazzara and Kerrigan, which assisted in the investigation. It appears that law enforcement also had the assistance of informants in the case: The complaint mentions a confidential source, identified as “CS-1,” who has pending criminal charges – though it is unclear whether they are related to the bank robberies – and cooperated with authorities in this case. Furthermore, the complaint mentions two co-conspirators not named as defendants (identified only as “CC-1” and “CC-2”), though it does not explicitly say that they are cooperating with authorities in the case.

The first of the two burglaries that Mazzara, Kerrigan and Mascuzzio are charged with is that of the HSBC Bank, which occurred over the weekend of April 8-10. When bank employees arrived for work on the morning of Monday, April 11, they realized that the bank had been burglarized over the preceding weekend. An investigation by law enforcement revealed, according to the complaint, “that the burglars had cut through the roof of the HSBC Branch and into the bank’s vault. Investigators found oxygen and acetylene tanks on the roof of the HSBC Branch and concluded that the burglars had accessed the roof of the HSBC Branch via the building next door, which was vacant and under construction.” (Acetylene is a gas; it is used, in conjunction with oxygen, to fuel welding and cutting torches.) Furthermore, the alarm wires coming from the HSBC Branch’s vault had been cut from inside the bank building sometime before the bank closed on Friday, and the telephone wiring in a Verizon utility box near the bank had been cut at approximately 1:50 p.m. on the same day, disabling phone lines to the bank.

The thieves also used an alleyway behind the bank, connecting 44th and 45th Streets, to gain access to the back of the bank. There, a low wall and ladder would have allowed easy access to the bank’s roof. A hole was then cut in the roof, and the thieves climbed into the bank, and robbed the vault of $330,000 in cash, and an unknown amount of valuables from safe-deposit boxes.

Surveillance-camera footage appears to show the defendants using the vacant storefront next door as a staging ground and a place to keep the items used in the robbery, which took place over the course of the entire weekend. One of the defendants is seen bringing a Shop-Vac (a drum model wet/dry vacuum cleaner) and acetylene tanks into the vacant storefront late Friday night; they made several trips back and forth between the storefront and the bank over the next couple of days. Finally, at around 5:09 a.m. on Sunday, they retrieved the Shop-Vac and some heavy bags from the storefront.

Cellphone towers have also placed the defendants in the area in question at the time of the crime. Surveillance cameras showed the same vehicles into which items were loaded at the bank, later pulling up to the homes of the defendants.

The second burglary the defendants were charged with occurred over the weekend of May 20-22, using similar techniques.

The burglars cut through the roof of the bank and into the vault. “Investigators found grinding wheels and oxygen and acetylene tanks on the roof of the Maspeth Branch,” says the complaint, as well as screws, tarp “and a four-sided plywood structure – three walls and a roof – that had been painted black.

The thieves stole $296,000 in cash from the Maspeth bank, as well as $4,340,000 in valuables – including cash, diamonds, jewelry, coins and baseball cards – from the safe-deposit boxes.

Surveillance-camera footage also showed the same vehicles used in the bank burglary first pulling out of, and later pulling up to, the residences of the defendants.

Surveillance-camera and credit-card records from the weekend of the robbery show the defendants purchasing plywood and other materials used in the robbery, such as fire extinguishers, screws, a paint roller and tarp.

“The Mazzara bank robbery crew did more than just allegedly steal money from banks –they took irreplaceable mementos from people who believed those items were far too valuable to be kept at home,” said FBI Assistant Director-in-Charge Diego Rodriquez, at Tuesday’s press conference. “These men were allegedly after the money, but they also took heirlooms, jewelry, documents and family photos and tossed them aside. Those items held little value to the men accused in this case, but we hope the community finds some solace in the fact that they will no longer be able to commit these thefts.”

“These bank jobs also left enough of a trace for the FBI and NYPD, whose good, old-fashioned police work led to the charges and arrests announced today,” said U.S. Attorney Preet Bharara.