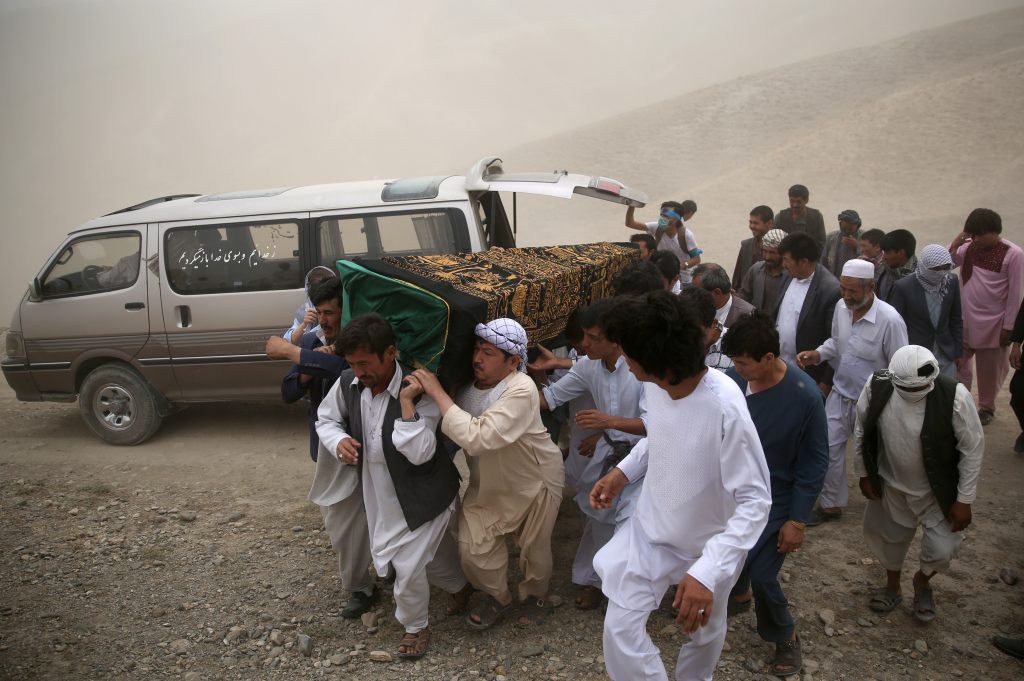 KABUL, Afghanistan — President Ashraf Ghani’s claim four months ago to have wiped out Islamic State in Afghanistan was shattered Saturday when the terrorist group struck the capital, Kabul, the country’s deadliest attack in 15 years of war.

More than 80 people were killed and another 231 were wounded when suicide bombers triggered two explosions at a rally by hundreds of ethnic Hazaras on Saturday, according to an e-mailed statement via the Afghanistan Interior Ministry. A third bomber was shot dead by police before detonating an explosive vest.

“The attacks by ISIS reveal how far the group has gone beyond its bases in the eastern region,” Ahmad Saeedi, a former Afghan diplomat in Pakistan, said by phone. “The U.S., Afghanistan and international community must go after them to destroy these new wolves before they destroy us.”

The Islamic State’s ability to carry out deadly attacks complicates prospects for peace in Afghanistan, where Afghan and U.S. forces and their allies have fought Taliban insurgents since 2001. In a rare move, the Taliban joined the government in condemning the attack by Islamic State, a group it considers mostly “well-known robbers and kidnappers” with no connection to Afghanistan.

The protesters, who were mostly Shiite Muslims in Sunni-majority Afghanistan, were rallying against government plans to divert a planned regional power line away from the Hazara-dominated province of Bamiyan. Islamic State claimed the assault as a “martyrdom attack” on Shiites, according to a statement on the Amaq News Agency website.

The carnage is the single deadliest assault in the country since 2001, the year the U.S. invasion unleashed the Taliban insurgency, according to the United Nations Assistance Mission of Afghanistan. It marks the first time Islamic State has struck the Afghan capital since gaining a foothold in the country in 2014, and has stoked fears the extremists are gathering strength.

The attack was condemned around the world, including by both the White House and Russian President Vladimir Putin, who said his country stood ready to help Afghanistan fight terrorism.

President Barack Obama, who once promised to pull out all U.S. combat troops from Afghanistan within 16 months of taking office, last October said he would slow the withdrawal from the country, leaving about 8,400 military personnel at the end of this year.

Last month Obama expanded the U.S. mission to allow troops to deploy alongside their Afghan counterparts in the fight against the Taliban and other insurgent groups in an acknowledgment that nation-building efforts and peace negotiations have foundered.

A four-nation peace process led by Pakistan this year failed to make any headway after the Taliban refused to join negotiations. The 15-year conflict has cost the U.S. almost $700 billion and killed more than 2,200 American troops.

The Taliban condemned Saturday’s attacks, calling them an attempt by Islamic State to ignite civil war, according to an e-mailed statement from spokesman Zabihullah Mujahed.

The two groups have clashed as they compete for territory in the east, leaving scores dead. Islamic State, which includes disaffected Taliban fighters from Pakistan and Afghanistan, now ranks behind the Taliban and al-Qaida in the country, with as many as 3,000 fighters, according to a Congressional Research Service report.

In March, President Ghani declared on a national broadcast that after months of fighting in remote districts of Nangarhar near the Pakistani border, Islamic State in Afghanistan had been wiped out.

“This deadly attack was a retaliation by Daesh, who have taken a beating in recent months from our Afghan forces and American drone strikes,” Naimatullah Ghafari, a member of Afghanistan’s Parliament, said by phone, using the Arabic acronym for the group. “Unfortunately Afghan civilians always pay the price in this war.”