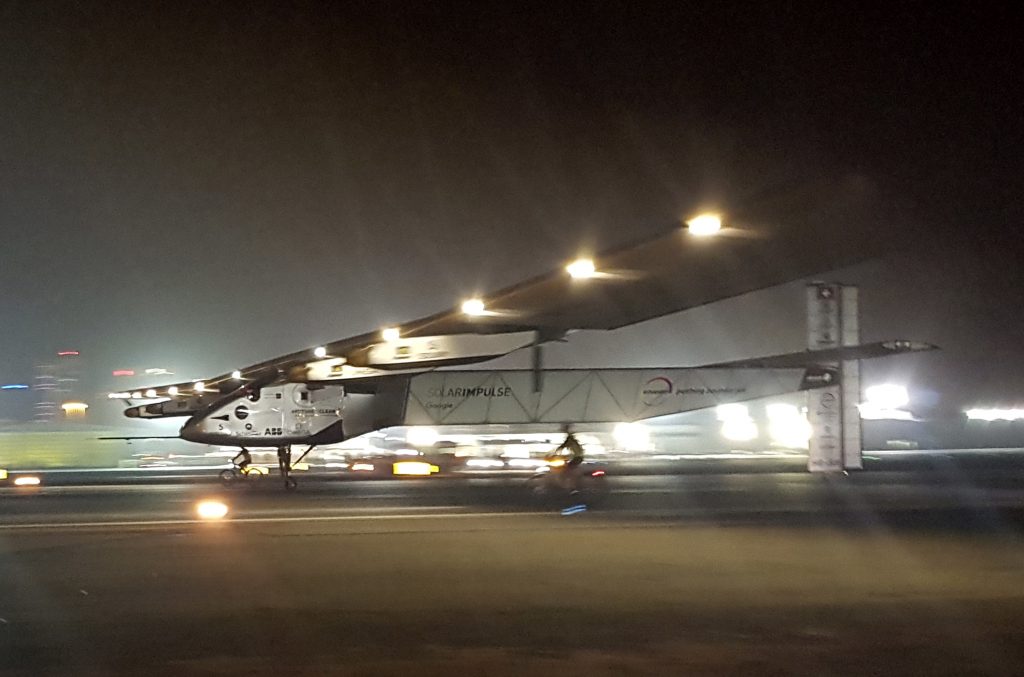 The world’s first round-the-world flight to be powered solely by the sun’s energy made history Tuesday as it landed in Abu Dhabi, where it first took off on an epic 25,000-mile (40,000-kilometer) journey that began more than a year ago.

Since its March 2015 take off, the Swiss-engineered Solar Impulse 2 has made 16 stops across the world without using a drop of fuel to demonstrate that using the plane’s clean technologies on the ground can halve the world’s energy consumption, save natural resources and improve quality of life.

“Our mission now is to continue to motivate people, corporations and governments to use these same solutions on the ground wherever they make sense,” Solar Impulse chairman and pilot Bertrand Piccard said in a statement ahead of landing the plane in Abu Dhabi.

The aircraft is uniquely powered by 17,248 solar cells that transfer energy to four electrical motors that power the plane’s propellers. It runs on four lithium polymer batteries at night. The plane’s wingspan stretches 236 feet (72 meters) to catch the sun’s energy.

At around 5,070 pounds (2,300 kilograms), the plane weighs about as much as a minivan or mid-sized truck. An empty Boeing 747, in comparison, weighs 400,000 pounds (180,000 kilograms). To help steady it during takeoffs and landings, the plane was guided by runners and bicyclists.

Despite its historic mission, the Solar Impluse 2’s journey was far from quick or problem-free.

The pilots faced a nine-month delay a year ago after the plane’s batteries were damaged during a flight from Japan to Hawaii. It was also delayed for more than a week in Cairo ahead of its final flight to Abu Dhabi when Piccard fell ill, and due to poor weather conditions.

The carbon-fiber plane is a single-seater aircraft, meaning its two Swiss pilots — Piccard and Andre Borschberg— had to take turns flying solo for long days and nights. To calm their minds and manage fatigue during the long solo flights, Borschberg practiced yoga and Piccard self-hypnosis.

In a statement this week, Borschberg said it is no longer a question of whether it’s possible to fly without fuel or polluting emissions.

“By flying around the world thanks to renewable energy and clean technologies, we have demonstrated that we can now make our world more energy efficient,” he said.

The pilots would rest a maximum of 20 minutes at a time, repeating the naps 12 times over each 24-hour stretch.

It took 70 hours for Piccard to cross the Atlantic Ocean, which was the first by a solar-powered airplane.

Borschberg’s flight over the Pacific Ocean at 118 hours — or what is five days and five nights — shattered the record for the longest flight duration by an aircraft flying solo.

Neither pilot was able to stand in the cockpit while flying, but the seat reclined for stretching and its cushion could be removed for access to a toilet. Goggles worn over the pilot’s eyes flashed lights to wake him up while armbands placed underneath their suits buzzed when the plane was not at flying level.

The plane also did not have a pressurized cockpit so Borschberg and Piccard could feel changes in temperature. The pilot’s blood oxygen levels were monitored and sent back to ground control in Monaco.

Hot temperatures in the Middle East this time of year cause thermals and turbulence that forced Piccard to fly longer periods of time with an oxygen mask as he piloted the last leg of the trip from Cairo to Abu Dhabi in roughly three nights and two days.

Piccard, a psychiatrist, is the son of undersea explorer Jacques Piccard and a grandson of balloonist Auguste Piccard. In 1999, he became the first person to circumnavigate the globe non-stop in a hot air balloon.

Borschberg, an engineer and graduate of Massachusetts Institute of Technology, is also an entrepreneur. He launched the Solar Impulse project in 2003 with Piccard.

The project is estimated to cost more than $100 million. The UAE-based Masdar, the Abu Dhabi government’s clean-energy company, was a main sponsor of the flight. There were more than 40 additional sponsors, including Omega, Belgian chemical company Solvay, Swedish-Swiss automation corporation ABB, Swiss manufacturer Schindler, Google and Moet Hennessey, among others.