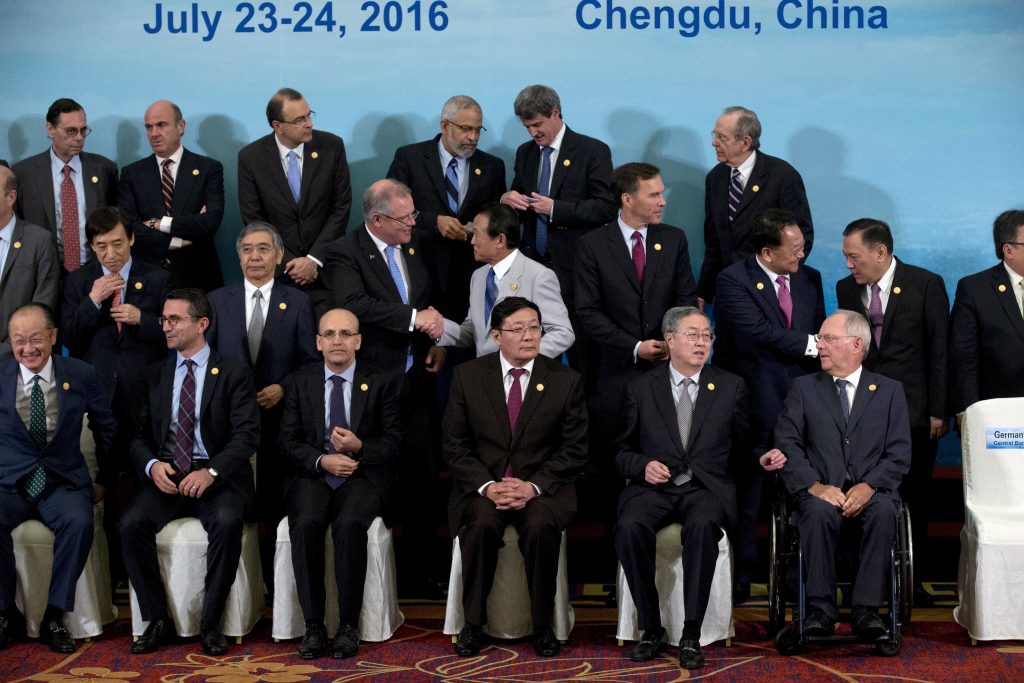 BEIJING (AP) — Finance officials of major economies pledged Sunday to boost sluggish global growth but announced no joint initiatives and promised to defend against the shockwaves of Britain’s vote to leave the European Union.

In a joint statement after a two-day meeting, envoys of the Group of 20 also rejected trade protectionism, an issue that has risen in prominence as Republication presidential candidate Donald Trump has talked about restricting access to American markets.

The United States, China, Britain, Germany and other governments at the meeting in Chengdu in western China pledged to use spending, monetary policy and regulatory reforms to strengthen growth. They promised to strengthen communication and cooperation but announced no joint action, as some financial traders had hoped.

“We are taking action to boost confidence and promote growth,” said the statement. It promised to use “any and all policy instruments” to achieve “strong, sustainable, balanced and inclusive growth objectives.”

U.S. Treasury Secretary Jacob Lew said ahead of the meeting that it was not the right time for coordinated action similar to that in 2008-09 following the global crisis because economies face different conditions.

The gathering of finance ministers and central bank governors took place against a backdrop of a weak global recovery, tension over Chinese exports of low-priced steel and Britain’s EU vote, which jolted global markets.

Sunday’s statement called for a “close partnership” between Britain and its European neighbors in the event British leaders go through with plans to leave the trade bloc.

On Friday, the director-general of the International Monetary Fund, Christine Lagarde, called for quick action to end uncertainty about the British-EU split. She said that turmoil prompted the IMF to cut its forecast of this year’s global growth by 0.1 percentage points.

“G20 members are ready to actively respond to the potential economic and financial impact brought by the British referendum,” it said. “In the future, we hope to see Britain as a close partner of the EU.”

“We will oppose all forms of protectionism,” the statement said.

Trump, who was named the Republican Party’s nominee for president on Friday, setting up a race with presumptive Democratic nominee Hillary Clinton, has stirred alarm about trade by calling for measures to protect American industry, though he has given no details.

Sunday’s G20 statement also cited the importance of reducing excess production capacity in steel and other industries that has led to a glut of supply and depressed prices. That is a source of tension between China and trading partners that accuse Beijing of exporting steel at improperly low prices, hurting competitors and threatening a loss of jobs.

Beijing has announced plans to shrink its coal and steel industries, eliminating millions of jobs. The United States has imposed anti-dumping duties on Chinese steel and European officials have launched trade probes.

Lew emphasized U.S. interest in seeing progress on that during a meeting with his Chinese counterpart, Lou Jiwei, according to Lew’s department.