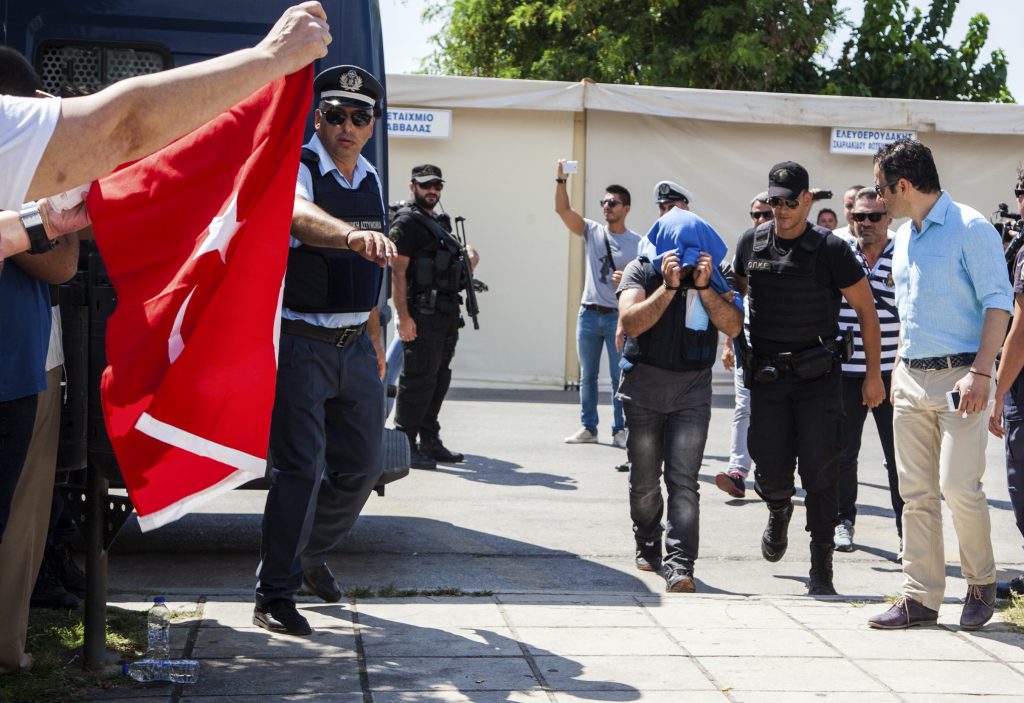 The Turkish military helicopter that landed in the Greek border city of Alexandroupolis just as an attempted coup was being quashed in Turkey has turned into one of the toughest diplomatic challenges to date for Greece’s relatively inexperienced government.

On board were eight Turkish military personnel — all unarmed helicopter crew members, it later turned out — who issued a mayday signal and were granted permission for an emergency landing.

The eight immediately surrendered to Greek police. They insist they were not involved in the attempted coup, had been tasked with transporting wounded soldiers and civilians and had fled for their lives after coming under fire from Turkish police.

Turkey disputes their claim, and has demanded their return to stand trial for alleged participation in the violent attempt to overthrow the government.

But the eight have applied for political asylum in Greece, saying they would be in danger if returned to Turkey amid President Recep Tayyip Erdogan’s widespread purges of the military and civil service in response to the failed coup.

Greece is now obligated to go through the asylum procedure, which can take weeks.

Their arrival on board a Black Hawk helicopter on July 16 — and their asylum applications in particular — have created a diplomatic headache for Greece, which has a long history of delicate relations with its much larger and more powerful eastern neighbor.

The two countries last came to the brink of war 20 years ago over a territorial dispute in the Aegean Sea that separates them, and while they have since enjoyed far warmer ties, tensions are never far away. Greece often complains of Turkish fighter jet violations of its airspace in the Aegean.

The Turkish helicopter case will also test the country’s relatively new coalition government, which came to power last year and consists of the left-wing Syriza party, which had never been in government before 2015, and the small nationalist Independent Greeks party, whose leader is the defense minister.

“This was a hot potato that literally landed on Greek territory,” said Thanos Dokos, director of the Hellenic Foundation for European and Foreign Policy think tank. The government “is torn between the sensitivities of the Syriza party on human rights and asylum issues on the one hand, and on the other the cynicism of any governing party when it comes to issues affecting the country’s foreign policy.”

Greek officials quickly returned the helicopter, and have suggested they would like to return the eight as well.

“What must be implemented is Greek and international law,” Deputy Defense Minister Dimitris Vitsas said on private Mega television, adding “but I must say that the argument in favor of extradition from the Turkish side is quite strong.”

But complicating matters are frequent comments by Turkish officials, including Erdogan himself, about reinstating the death penalty. If such talk gathers pace, or if death penalty legislation is introduced in Turkey’s parliament, Greece or any other European Union member would struggle to extradite someone to a country where they might be executed.

“The key question will be the death penalty. That’s a red line not just for Greece but for the whole European Union,” said Dokos.

The widespread purges in Turkey, which in a week have led to about 10,000 people being arrested and about 50,000 others being fired or suspended from their jobs, has fueled the argument that the eight would not face a fair trial at home.

Turkey, however, has made no bones about how important it considers their return to be. The country’s ambassador to Athens, Kerim Uras, has warned that the Turkish public is closely watching the case, and a failure to return the military personnel could have repercussions on bilateral relations.

“If they are returned as soon as possible, this can really turn into a great, positive thing for bilateral relations,” Uras said. “If it’s not, I would be quite concerned as an ambassador — and I must say this, that it would not help at all, and that public opinion’s sentiments might be … reactionary.”

For security reasons, the eight have been transferred away from the northeastern city of Alexandroupolis where they landed to Athens. They went on trial last week for illegal entry into the country and each received two-month suspended sentences. They have interviews Wednesday with asylum authorities.

Another crucial issue for Greece is that Turkey largely controls the refugee issue. Last year, hundreds of thousands seeking the safety of Europe flowed into Greece from the nearby Turkish coast and then headed to northern and central Europe. That essentially ended with the closure of land borders in the Balkans to refugees, and an EU-Turkey deal under which migrants arriving in Greece after March 20 face deportation back to Turkey.

The flood has since slowed to a trickle, but there is concern in Greece that Turkey could unleash the flow of migrants. Any new arrivals would just add to the roughly 57,000 refugees and migrants already stranded in Greece and straining local services.

Dokos said if Greece indicates that the military personnel would be returned, Turkey might refrain from turning up the pressure on Athens.

“If the message from the Greek side is that we have to go through the motions but the law is basically on your side and it will take a few weeks but then they will be sent back, that should be enough to keep the Turkish side satisfied,” Dokos said.

“But these are not normal times. I’m not sure the Turkish government, especially President Erdogan, is thinking clearly right now,” he said. “So they might decide to put additional pressure on the Greek side.”