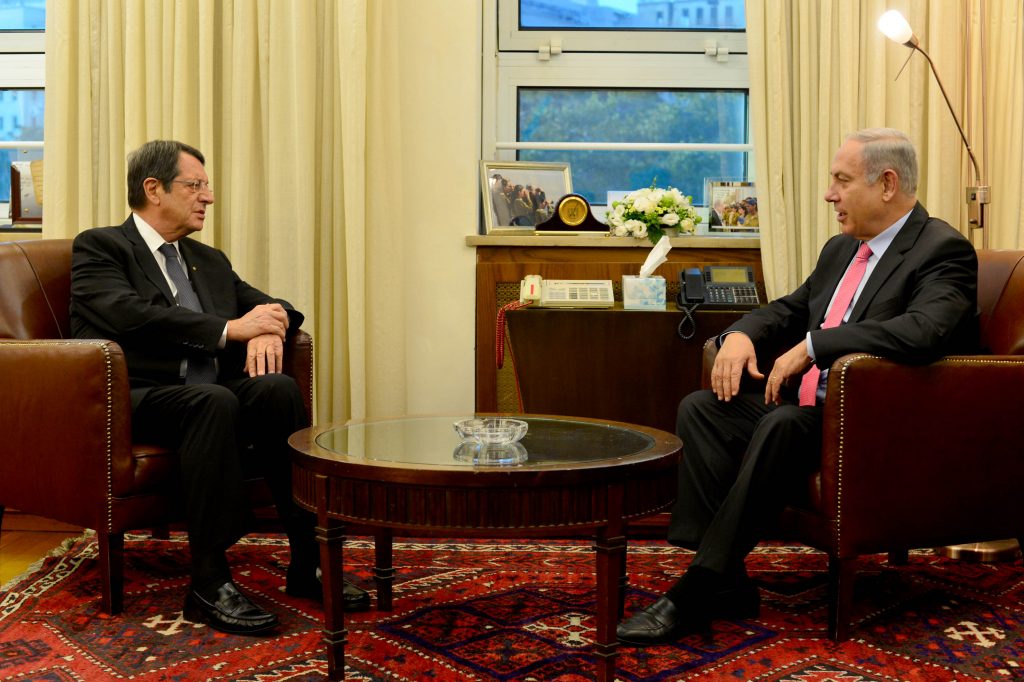 Prime Minister Binyamin Netanyahu and Cypriot President Nicos Anastasiades met on Sunday afternoon to discuss the impact on bilateral agreements in the wake of Israel’s reconciliation with Turkey.

In two meetings, they talked about the possibility of using the planned gas pipeline from Israel to Turkey to also transfer gas to Cyprus for marketing in Europe. They also discussed the feasibility of connecting the electricity grids of the two countries.

Netanyahu assured his Cypriot counterpart that every effort will be made to include Cyprus in the gas export plans.

Anastasiades flew to Israel Sunday evening for a hastily arranged visit, which fueled speculation about a strain in the bilateral relationship. Accordingly, Israel downplayed any crisis.

One diplomatic source in Yerushalayim said that Israel had kept Nicosia abreast of its negotiations to reconcile with Turkey, and that there was nothing dramatic about Anastasiades’ trip. The source said that a face-to-face meeting was warranted as a result of the developments in Turkey following the failed coup there two weeks ago.

The Cypriot president was accompanied by his Foreign Minister Ioannis Kasoulides and Energy minister Yiorgos Lakkotrypis.
.
Referring twice to Netanyahu as his “dear friend,” Anastasiades said that Israel and Cyprus were “reliable partners that see eye-to-eye on a wide agenda of issues ranging from energy to security, to a very sincere, open and frank political dialogue.”

As an indication of how the ties are growing, he noted that last week there were some 80 flights from Israel to Nicosia. He was profuse in expressing his appreciation to Israel for help in putting out a massive wildfire on the island recently.

“I want to express to you and to the people and Government of the state of Israel personally my gratitude and the gratitude of all Cypriots for the indispensable assistance which you offered recently during the terrible forest fires in Cyprus. I also want to especially thank the professional men and women who came to our aid – the pilots, the ground crew, the support staff and their officers, who so quickly went on alert, flew to Cyprus and helped us in our time of need,” Anastasiades said.