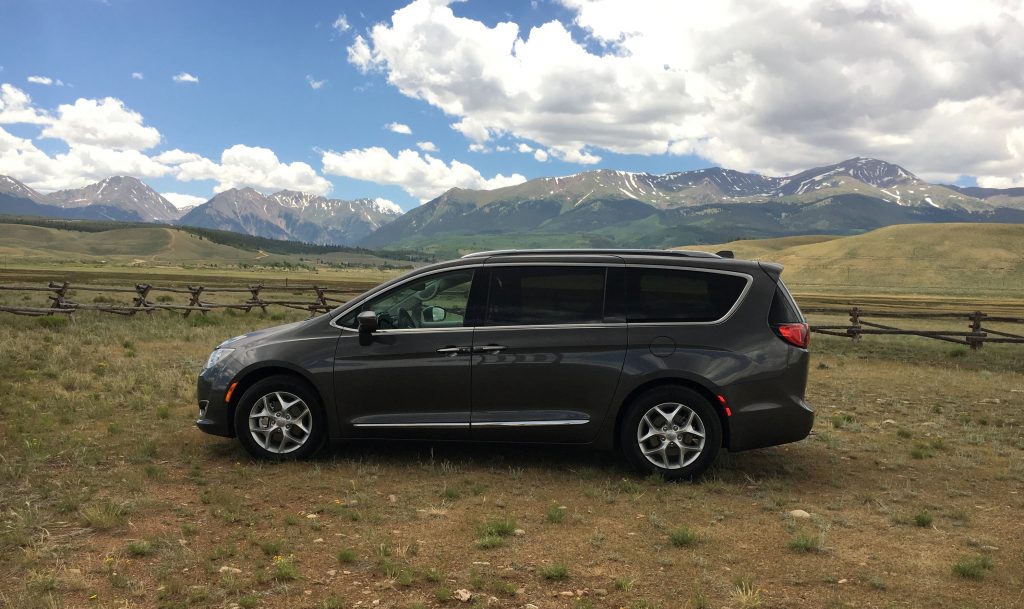 Moving from the city to the suburbs resulted in losing a bet dating to my college days. Not for swapping town for country, so to speak, but for something far more offensive to the know-it-all collegian: buying a minivan.

The details of the wager are vague, like most things from college, but it was supposed to include shame, ridicule and money. Instead, the used 2002 Honda Odyssey became the best purchase of my adult life and is still paying out.

That Odyssey is still in the family, and I’m still being mocked, though now it is for my excitement in testing the new Chrysler Pacifica minivan.

“Why didn’t you ask for a Jeep?” a family member asked as we embarked on a cross-Colorado road trip. When his four kids and my two kids piled into the van for a fireworks show, he had his answer.

Just as it did when it invented the minivan in 1984, Chrysler is attempting to revitalize its brand, and a family vehicle market that has shunned minivans in favor of crossovers. The poor minivan is being subjected to the same fate it dumped on the station wagon in the ‘80s.

Part of the reason Chrysler dropped the well-known Town and Country name was to shed the silly stigma of minivans as the sacrificial lamb of family over self. As if sliding doors look dumber than hoisting your toddlers in and out of their car seats 136 times a day. Regardless, Chrysler deemed the Pacifica name more chill than no-chill, even for those who associate it with the forgettable Franken-crossover made from 2004 to 2008. The name change is meant not to confuse but to shift expectations.

From a partial side view, one person couldn’t tell if it was a minivan or crossover.

When in reverse, one witness asked if it was electric because it was so quiet.

From the back seat, the 10-year old said, “I like how everything fits.”

After driving nearly 1,000 mountainous miles in the Colorado Rockies, I had to agree.

The Pacifica handles like a crossover, looks more button-down yet still has two sliding doors, a built-in entertainment system, a high ceiling and a low floor, with a tall, wide rear that enables it to excel at what it was meant to do: haul people — and things — in comfort.

The difference is that the minivan has never been this good.

Just like the first time, Chrysler has built the Pacifica on an all-new platform not shared by any other Fiat Chrysler automobile.

It has a wider wheelbase and is 250 pounds lighter than the outgoing model, thanks primarily to lighter doors and liftgate. The tester came with 18-inch wheels ($895) and lower-profile all-season tires, which make it appear to be able to handle mountain back roads — ground clearance be hanged!

It can’t, it’s not meant for that and for now it comes only in front-wheel drive. “We’re always open to feedback from our customers and would consider (all-wheel drive) in our future,” Pacifica rep Angela Bianchi said.

Bring it. Snow tires will handle dicey terrain better than AWD, but who wants to be switching tires twice a year when the kids’ schedule takes no break. Ever.

The Pentastar V-6 provides plenty of pep from a stop, letting certain drivers squeal away from family functions.

It steers like a minivan, wide and boatish, but the nose tucks into turns more like a sedan than a minivan.

On cloverleaf ramps or two-lane highways bending through valley and forest, it doesn’t escape the body roll inherent in a wide and tall vehicle, just like a cow can’t help but moo.

But the most significant engineering feature on the new Pacifica is the nine-speed transmission, which comes standard across the five trim lines.

The nine-speed transmission has gotten about as bad a rap as hippies in Boulder. It was fraught with problems in its first incarnation in the complex 2014 Jeep Cherokee. We didn’t like its balking in the 2016 Honda Pilot either.

The nine-speed in the Pacifica is the best application yet. It helped return 32 miles per gallon combined over mostly highway miles, much better than the U.S. Environmental Protection Agency-rated 28 highway mpg, which ties the Odyssey for best in class. The plug-in hybrid variant, expected in the fall, will have a 30-mile all-electric range that gets the equivalent of 80 mpg.

The transmission was remarkably unnoticeable, which is great for an automatic. It didn’t make the engine wail as it climbed mountain passes, which prompts a noise in other automatics that can trick the driver into letting off the gas instead of giving it more.

Up the Continental Divide the Pacifica’s transmission pushed the engine but never bullied it, like an older brother coaxing his little sister over Vail Pass at 10,662 feet.

At flatter moments on the highway, the higher gears keep the engine running at low revolutions per minute so all is calm and quiet as the car’s occupants are fully immersed in the passing world or deepening dreams. There was plenty of torque — class-leading torque, according to Chrysler, for two-lane highway passing moves, even on an incline. The kids rarely noticed, and when they did, they slapped the heated seats and said, “Hyah, horsey!”

Serenity now can indeed happen in the family road trip, especially when there are 10 USB ports, 2 HDMI ports and two built-in high-definition 10-inch touch screens. There wasn’t much bickering from the second-row captain’s chairs on our adventure.

While an atlas is always better than vehicle navigation on road trips, the UConnect system and the 7-inch vehicle information display make for simple navigation of the world inside the car. We napped, ate, ogled scenery, changed outfits, stowed camping gear alongside civilized togs and otherwise lived in the Pacifica for nearly a week.

Though we didn’t need to flip the awesomely clever Stow ‘n Go second- and third-row seats into the floor to haul bedroom sets or sheets of drywall on the converted flat bed, the kids were able to figure out how to do it if the need arose.

In fact, unlike so many of the camping tasks (kids will ask where to get wood in a forest), the grade schoolers were able to handle all those minivan functions by themselves, including uncovering one of the free apps that teaches U.S. state geography via license plates passed on the road.

The Pacifica makes parenting easier, which makes life better. And that, my college friends, is something worth betting on.

2017 Chrysler Pacifica Touring L Plus at a glance