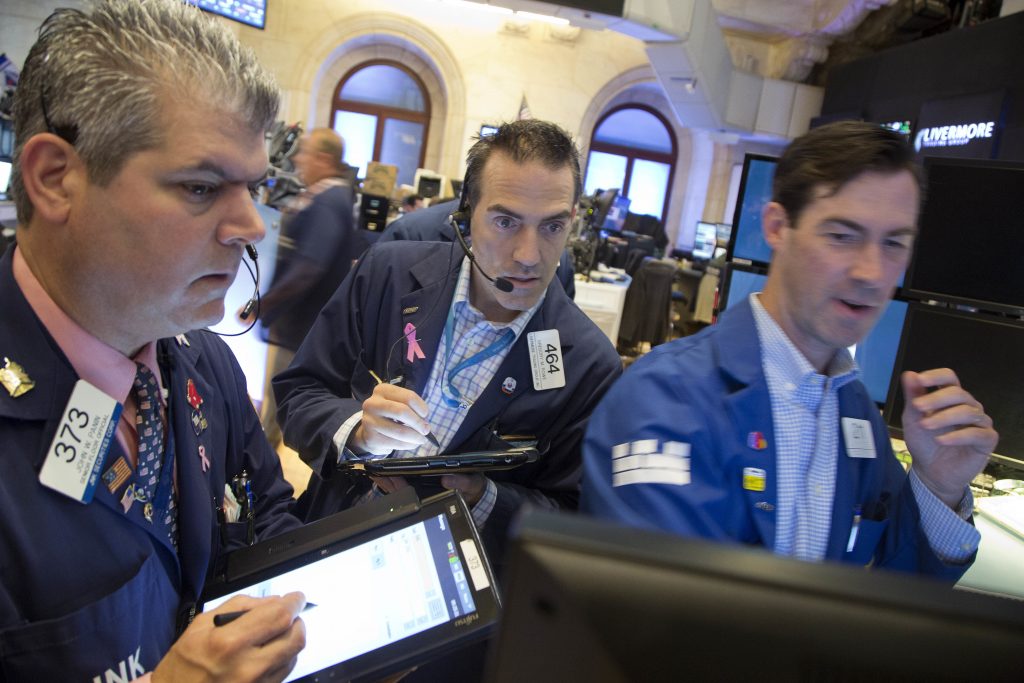 NEW YORK (AP) — Stocks ticked higher in Friday afternoon trading, the latest nudge forward for a market that has taken a decidedly slow-and-steady path to record highs in recent days. Telecom and utility stocks led the way, as they have for much of this year.

The S&P 500 recovered most of its 0.4 percent loss from a day earlier.

ANALYST’S TAKE: “I think people are a little more sensitized, where any tick lower in the market creates this ‘buy-on-the-dip’ mentality,” said Brian Jacobsen, chief portfolio strategist at Wells Fargo Funds Management. “I think it’s interesting; a half-a-percent move down feels like a 5 percent move.”

ANOTHER MILD ONE: It’s been a calm drive the last two weeks for the S&P 500, where mostly modest moves have helped set a series of records culminating in its all-time high of 2,173.02 set on Wednesday. The S&P 500 has yet to have a day in which it moved by 1 percent, up or down, in the last two weeks.

Many doubts are still hanging over the market, including the continued drop for corporate earnings and a U.S. economy that is growing only modestly. But various earnings and economic reports have come in better than expected, and the S&P 500 is up more than 8 percent since June 27.

It’s a sharp turnaround from the end of June, when worries about the United Kingdom’s vote to leave the European Union sent the S&P 500 to six straight days in which it swung at least 1 percent.

BIGGER WAVES AHEAD? Next week could be a more exciting one for markets, with the Bank of Japan and Federal Reserve both holding policy meetings. Record-low interest rates and big stimulus programs from central banks have pushed stocks higher since the financial crisis.

Japan’s economy is barely growing, and economists are speculating about whether its central bank may push more stimulus next week.

The U.S. economy is in better shape than other advanced economies, and few expect the Federal Reserve to make a big move at its meeting. But if it highlights the better-than-expected recent economic reports, economists may move up their predictions for when the Fed could next raise interest rates.

The Fed pulled rates off their record low in December but has held pat since then.

ENERGIZED: Southwestern Energy jumped $1.41, or 10.6 percent, to $14.62. It was the first day of trading for the producer of natural gas and oil after it reported higher-than-expected earnings and raised its forecast for production this year. Southwestern Energy was the best-performing stock in the S&P 500.

POWERED UP: Stanley Black & Decker jumped $5.42, or 4.7 percent, to $120.39, after reporting stronger revenue and earnings for its last quarter than Wall Street expected. It benefited from stronger tool sales in Europe and elsewhere.

ALIGHTING: American Airlines climbed $1.10, or 3.1 percent, to $36.06, after reporting a milder drop in quarterly earnings than analysts expected. The carrier’s revenue fell 4 percent because of the soft global economy, among other factors, but Wall Street was forecasting a steeper drop.

NOT SO SWEET: Honeywell International fell $4.16, or 3.5 percent, to $114.50, to lead industrial stocks lower. The company reported stronger earnings than analyst expected, but it also lowered its forecast for full-year sales. The industrial sector was the only of the 10 that make up the S&P 500 to fall.

OUCH: Stryker fell $6.63, or 5.4 percent, to $115.93, after it gave a forecast for earnings in the current quarter that was lower than analysts were expecting. The medical device maker’s stock had been up more than 30 percent for the year before the report.

OVERSEAS: European markets were mixed after reports suggested countries that use the euro are proving resilient to the uncertainty surrounding Britain’s vote. A report on business in the U.K. was “truly horrible,” according to one economist, and raised expectations of more central bank stimulus there.