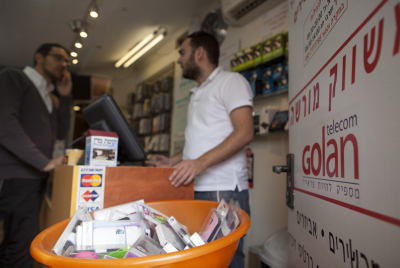 YERUSHALAYIM – A Tel Aviv court has issued an injunction against the completion of a merger between Golan Telecom and Hot Mobile, after a deal to unite the companies had been struck. The injunction was ordered after competing cellphone service firm Cellcom petitioned against the merger.

The injunction will hold off the deal until the court hears arguments from all sides and decides on the legality of the Golan-Hot Mobile deal.

The deal between Golan and Hot Mobile was concluded in June. The deal would see Golan switch over from the Cellcom network to the network operated by Hot Mobile. Golan will pay NIS 150 million annually for the next ten years, according to the report. Hot Mobile will also provide financial backing and guarantees to Golan, as it pays off its NIS 600 million debt to Cellcom.

Last month, the Communications Ministry vetoed a proposed merger of Cellcom and Golan Telecom. A report by the Ministry said that the merger “will bring a significant increase in concentration of services in one organization in the market. The merger will bring about an opportunity for the setting of prices in an unfair manner and a rollback of the chief benefits of the cellular market reform of 2011.”

The Ministry based its opinion on a report by the OECD that shows that the more companies with their own infrastructure operating in the cellular market, the lower the price for existing services, and the more innovative new services are offered.

Golan Telecom was the first low-cost cell-phone service provider in Israel, cutting the charges that veteran companies Pelephone, Cellcom and Orange (Partner) by tens of percent. As a result of Golan Telecom’s approach to business, Israelis save hundreds of shekels on their cell-phone bills, forcing the veteran companies to cut costs – and to lay off workers and downsize, as the low-cost revolution ate into profits.