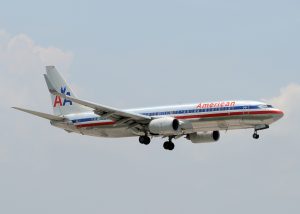 FORT WORTH, Texas (AP) – American Airlines’ second-quarter profit fell 44 percent from a year ago, to $950 million, as taxes, lower revenue and higher labor costs offset another big drop in fuel.

Like other airlines, American is making money but seeing its profit trimmed by lower average fares. American said revenue fell 4 percent because of increased competition, the soft global economy, and the strong dollar, which hurts sales overseas.

American, the world’s biggest airline, said Friday that net income amounted to $1.68 per share and compared with $1.7 billion, or $2.41 per share, in last year’s second quarter.

Excluding one-time costs, mostly related to its 2013 merger with US Airways, American said profit would have been $1.77 per share.

The Fort Worth-based company argued that the results were skewed because it made a $543 million provision for income taxes while it paid no taxes a year ago.

Revenue fell to $10.36 billion, but topped the $10.32 billion forecast of the FactSet analysts.

A key figure, revenue for every seat flown one mile, dropped more than 6 percent from last summer. That reflects lower average fares – tempted by cheaper fuel, airlines have been adding seats faster than the growth in demand, which has, in turn, forced them to cut prices to keep planes nearly full.

American predicted that revenue per mile will fall by between 3.5 percent and 5.5 percent in the July-through-September quarter.

Executives from Delta Air Lines and United Airlines blamed much of the weak pricing on “close-in” tickets that are bought on short notice, not weeks ahead of time. It is assumed that business travelers buy many of those tickets.

Corporate travelers, like vacationers, are benefiting because low-fare carriers are competing more aggressively against the giants.

“Corporate demand is strong,” American’s president, Scott Kirby, said on a conference call with analysts, “but we have a lot of low fares, so they are getting a deal right now.”

While jet-fuel prices rose and then leveled off this year, they are still far lower than a year ago. American saved $530 million on fuel, or about 25 percent, when including fuel it buys for carriers that operate its American Eagle flights.

The shares have fallen 17 percent since the beginning of the year. The stock has dropped 15 percent in the last 12 months.