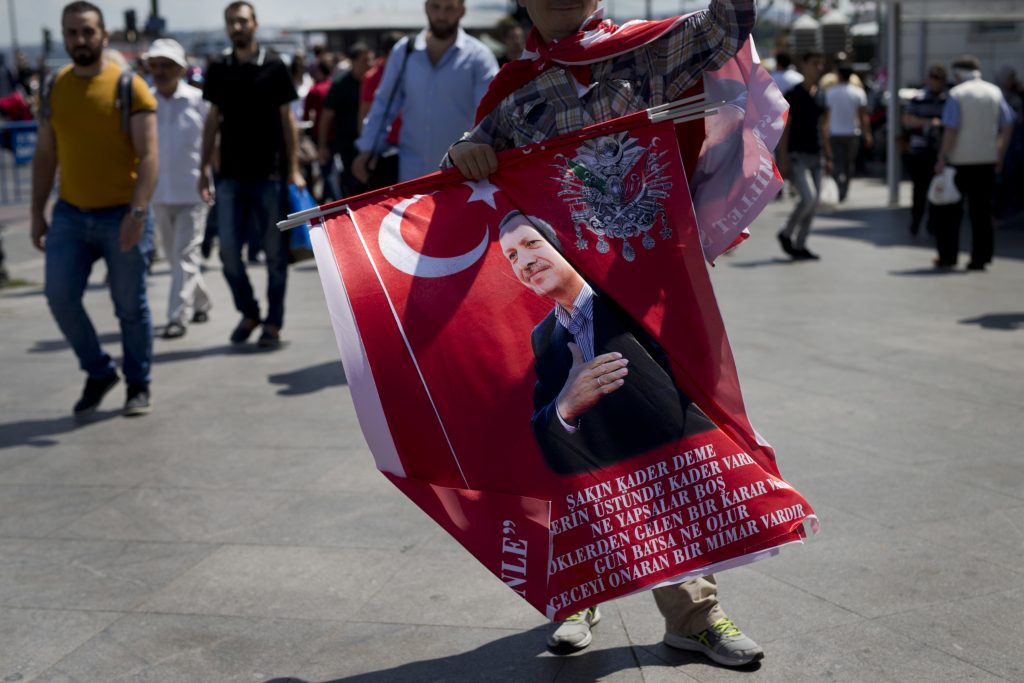 ANKARA, Turkey (AP) — Turkish lawmakers convened Thursday to endorse sweeping new powers for President Recep Tayyip Erdogan that would allow him to expand a crackdown in the wake of last week’s failed coup.

The 550-member parliament is set to approve Erdogan’s request for a three-month state of emergency. Erdogan’s Justice and Development Party account for 317 members in the chamber.

Under the Turkish Constitution, the emergency measures allow the government to “partially or entirely” suspend “the exercise of fundamental rights and freedoms,” so long as it doesn’t violate international law obligations. Lawmakers can sanction, under the terms of the constitution, a state of emergency for a period of up to six months.

Before the vote, Deputy Prime Minister Numan Kurtulmus said that once emergency measures are invoked, the country would suspend its participation in the European Convention of Human Rights, an international treaty meant to protect human rights and freedoms. He said the move was justified under a convention article allowing for such a suspension in times of emergency.

A state of emergency has never been nationwide though it was declared in the restive southeast of the country between 1987 and 2002. There, governors were able to impose curfews, call in military forces to suppress demonstration, and issue search warrants. Martial law was imposed across the country for three years following a successful military coup in 1980.

The measure would give Erdogan the authority to extend detention times for suspects and issue decrees that have the force of law without parliamentary approval, among other powers. Even without the emergency measures, the government has already imposed a crackdown that has included mass arrests and the closure of hundreds of schools.

Turkish state media said a further 32 judges and two military officers have been detained by authorities during the crackdown since last week’s coup.

Already, nearly 10,000 people have been arrested while hundreds of schools have been closed. Additionally, as of Thursday, 58,881 civil service employees have been dismissed, forced to resign or had their licenses revoked.

A soldier allegedly linked to the attack on a hotel where Erdogan had been vacationing during the foiled coup was arrested in southwestern Turkey, the state agency Anadolu reported Thursday. The lieutenant was one of about 30 soldiers who government officials have said were involved in the attack on the hotel in the resort town of Marmais.

The attackers arrived minutes after Erdogan had left the hotel, according to official reports. Earlier this week, officials said at least four suspects remain on the run.

In Greece, a court sentenced eight Turkish military personnel, who fled there aboard a helicopter during the coup attempt, to two months in prison for illegal entry into the country. Turkey has demanded their return to stand trial for alleged participation in the coup attempt. The eight, who deny involvement, have applied for asylum saying they fear for their safety if they are returned.

Countries around the world are keeping a close watch on developments in Turkey, which straddles Europe, the Middle East and Asia. German Foreign Minister Frank-Walter Steinmeier said Thursday the state of emergency should only last as long as it’s “absolutely necessary.”

Steinmeier said it’s important that “the rule of law, a sense of proportion and commensurability are preserved” and that it’s in Turkey’s interest to “keep the state of emergency only for the duration that is absolutely necessary and then immediately end it.”

Any action stemming from the new powers should only be taken against those with “a provable involvement in punishable actions” and not “an alleged political attitude,” Steinmeier added.

Erdogan, who had been accused of autocratic conduct even before this week’s tough crackdown, said the state of emergency would counter threats to Turkish democracy.

“This measure is in no way against democracy, the law and freedoms,” Erdogan said Wednesday after a meeting with Cabinet ministers and security advisers.