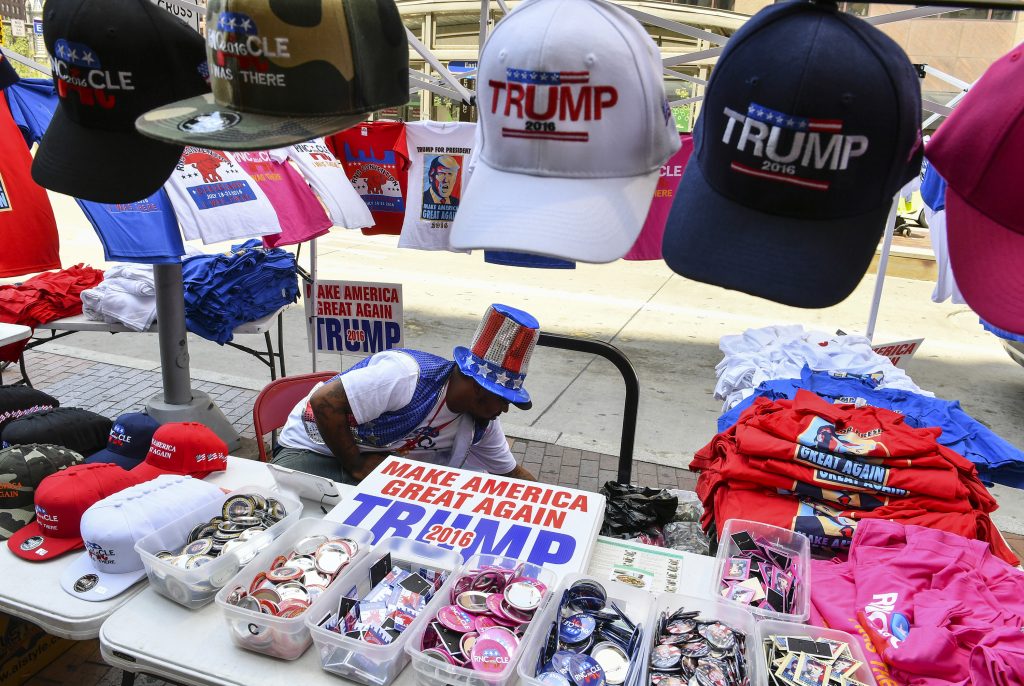 CLEVELAND (AP) — It’s Donald Trump’s big moment to make his case to the country — and to the many rattled doubters in his own party. The most important speech of his presidential campaign will bring down the balloons on a convention marked by divided loyalties and unwanted distractions as well as full-throated roars against Democratic rival Hillary Clinton.

Competing passions were sharply on display Wednesday night in a hall that echoed first with cheers for Trump’s fiercest opponent in the primaries, Sen. Ted Cruz of Texas, from his supporters, then thunderous boos from the pro-Trump masses when Cruz wrapped up his speech without endorsing the nominee.

Mike Pence’s acceptance speech as Trump’s running mate was overshadowed as a result, one more missed opportunity at a convention with a daily drip of them. That raised the stakes even higher for what is intended to be Trump’s triumphant turn on the stage Thursday night as he accepts the Republican nomination.

“No big deal!” Trump posted afterward about Cruz’s speech. He said Cruz did not honor the pledge that Republican primary candidates had made to support the eventual nominee.

He said he saw the text of Cruz’s speech two hours before it was delivered but thought, “Let him speak anyway.”

The convention ceded the prime-time stage on its third night to Cruz, who mentioned Trump only once, congratulating him for winning the nomination but coming no closer than that to rallying behind him. Trump allies were furious. One of them, New Jersey Gov. Chris Christie, called Cruz “totally selfish.”

After that episode, Pence, the Indiana governor and a favorite of conservatives who have decidedly mixed feelings about Trump, tried to make his mark to a nation that knows little about him.

“You have nominated a man for president who never quits,” Pence said. “Until now, he’s had to do it all by himself against all odds, but this week, with this united party, he’s got backup.” Unity, though, was still elusive.

The campaign had hoped Pence’s address would quiet Republican qualms about Trump. Unlike the celebrity businessman, Pence is an experienced politician and ally of party leaders.

But Cruz’s appearance left the arena unsettled for the night’s closing speakers. Former House Speaker Newt Gingrich tried to quiet the anger as he took the stage, going off script to try to explain away the senator’s lack of support for the nominee.

The gathering’s open secret was that Cruz came to audition for 2020 — an ambition that largely counts on Trump losing this year and leaving an open field for the next election.

Beyond that the two men have a history of animosity, having exchanged piercing insults in the primaries, when the businessman called the senator “Lyin’ Ted” and the senator branded Trump a “pathological liar.”

Cruz told Trump in a phone conversation two days ago that he would not endorse him during his speech, according to Cruz aide Jason Johnson.

Still, Trump’s campaign invited Cruz to speak — as a headliner, no less. That decision was sure to spark a new round of second guessing about the campaign’s management of the convention and preparedness for the bruising campaign against Clinton.

One source familiar with the campaign’s inner circle’s thinking but not authorized to speak publicly said Trump, his relatives and closest advisers were angry at Cruz and had expected, while not an endorsement, a warmer embrace of the nominee and less showmanship from the senator.

For three days running, the convention’s intended message of the day got sideswiped by unwelcome developments — a biting if short-lived scrap over rules during the opening, a storm over plagiarism in Melania Trump’s speech that spilled into Wednesday, then Cruz’s performance from the stage.

Through it all Republicans savaged Clinton, painting an apocalyptic vision of America if she should win and aggressively challenging her character. For a third straight night, the crowd repeatedly chanted, “Lock her up.” The negativity crossed a line for some in the party.

“What happened to professionalism, manners and humanity in our politicians and citizens?” asked Bill Pickle, a South Carolina delegate.