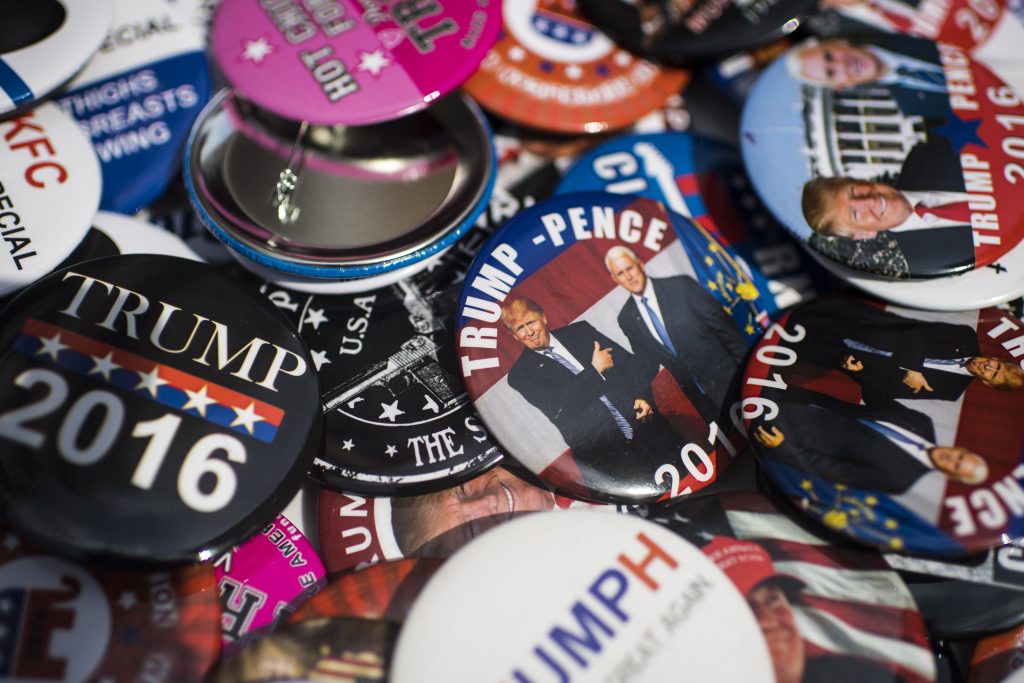 Donald Trump painted a dire portrait of a lawless, terrorized nation as he accepted the Republican presidential nomination here Thursday night, delivering a sweeping indictment of a feckless political and corporate class that he argued was thrusting the United States into a perilous decline.

Declaring that he alone has the leadership strength to secure the homeland and rejuvenate the economy, the billionaire real estate mogul offered himself as a “law and order” candidate and made a direct appeal to blue-collar Americans who have felt left behind in the 21st century.

“The forgotten men and women of our country – people who work hard but no longer have a voice: I am your voice,” Trump said in a long address to fired-up delegates on the closing night of the Republican National Convention.

Rather than pivoting to the political middle with an uplifting address, Trump punctuated the turbulent four-day convention with a heavy speech with simple declarations. And he focused intensively on the alleged dangers posed by immigrants and refugees, showing that on the biggest stage of his campaign he would not shy away from rhetoric that many minority voters find repulsive.

The tone of his prepared text was hard-edged – at times severe – and echoed the dark themes of Richard Nixon’s 1968 campaign. Trump is betting that general-election voters feel so beleaguered that they will heed his call for radical change.

Trump described the country as beset by illegal immigrants, some of them killers. The crowd chanted back at him, “Send them home,” and “Build the wall.” And Trump decried an increase in homicides in some cities.

“I have a message to every last person threatening the peace on our streets and the safety of our police: When I take the oath of office next year, I will restore law and order to our country. Believe me. Believe me,” he said.

Trump’s relentlessly gloomy tone was a jarring contrast to the sunny introduction delivered by his daughter Ivanka Trump, who portrayed him as a generous, magnanimous business executive who would be “the people’s champion” and “a fighter” who delivers results.

She said her father has been an advocate for women in his company and would do the same as president, saying that he supports equal pay for equal work and would change labor laws to help make quality child care affordable – all priorities of presumed Democratic nominee Hillary Clinton.

Donald Trump laid out stark differences between his agenda and that of Clinton. He asserted that his rival is a “puppet” of corporations and elites, and that she would “keep our rigged system in place.”

Trump blamed Clinton directly for the past decade and a half of foreign operations that have wrought turmoil in the Middle East and cast the former secretary of state as a favor-trading, self-enriching agent of overseas powers.

“This is the legacy of Hillary Clinton: death, destruction, terrorism and weakness,” he said. “But Hillary Clinton’s legacy does not have to be America’s legacy.”

As Trump attacked Clinton, the attendees chanted, “Lock her up!” as they had for previous speakers. At one point, Trump tried to shush his supporters. He gestured “no” with his hands and declared that together they should beat her at the polls in November.

In virtually every policy realm, Trump vowed to put the country’s interests before any other – redirecting Washington’s gaze inward in an age of globalization.

“Americanism, not globalism, will be our credo,” he said. “As long as we are led by politicians who will not put America first, then we can be assured that other nations will not treat America with respect – the respect that we deserve. The American people will come first once again.”

Thursday’s address was the most consequential of Trump’s brief and remarkable political career. He strode onstage to the “Air Force One” theme song before an enormous screen displaying his name in huge gold letters.

The stakes were made higher by missteps and missed opportunities during the convention’s first three nights, putting pressure on the nominee to convince the general electorate that he has a credible and appealing vision for the nation’s future.

Throughout his remarks, Trump cast himself as a change agent and Clinton as a guardian of the status quo.

“I have joined the political arena so that the powerful can no longer beat up on people that cannot defend themselves,” he said.

Trump directly addressed some of the more controversial policy proposals of his candidacy, including his vague, newly formulated vow to temporarily ban people from any nation connected to terrorism from entering the United States.

“We don’t want them in our country,” Trump said. He added, “I only want to admit individuals into our country who will support our values and love our people. Anyone who endorses violence, hatred or oppression is not welcome in our country and never, ever will be.”

Earlier in the evening, Maricopa County (Arizona) Sheriff Joe Arpaio, one of the most polarizing figures in the immigration debate, vouched for Trump’s proposal to build a wall along the Mexican border.

He said, “Donald Trump will build the wall” – at which point the crowd chanted “Build the wall!” – “and restore law and order and keep drugs and illegal immigrants from entering our country.”

Trump was under pressure to project unity for the fractured Republican Party, which was split anew by an extraordinary uproar Wednesday night on the convention floor. As it became clear that Sen. Ted Cruz (Texas) would not endorse his former primary rival in his prime-time address, the crowd booed and jeered him until he exited the stage.

As speakers all week have done, Trump sought to rally Republicans to his cause with sharp and relentless attacks on Clinton and the Democratic Party.

“We cannot afford to be so politically correct anymore,” he said to enthusiastic cheers. “So if you want to hear the corporate spin, the carefully crafted lies and the media myths, the Democrats are holding their convention next week. But here, at our convention, there will be no lies. We will honor the American people with the truth, and nothing else.”

One of the loudest crowd responses came when Trump introduced his new running mate, Indiana Gov. Mike Pence, who has strong support among evangelicals and other conservatives.

Trump was unquestionably the star of the final evening. Throughout the night, his family, friends and employees talked glowingly about his character and leadership style. In gauzy videos as well as speeches, they described him as a compassionate visionary with a connection to the common man and a drive to fix problems and finish projects.

“I truly believe Mr. Trump is America’s blue-collar billionaire,” said Jerry Falwell Jr., president of Liberty University. “He is down-to-earth. He loves America and the American people. He is a true patriot and a champion of the common man.”

At center stage was Trump’s eldest daughter, Ivanka Trump, who introduced herself as non-partisan. “Like many of my fellow millennials, I do not consider myself categorically Republican or Democrat.”

And she said her father “cannot stand to see” empty main streets and boarded-up factories, college graduates who are crippled by student debt and mothers who cannot afford the cost of child care.

“Other politicians see these hardships, see the unfairness of it all, and say, ‘I feel for you,’ ” she said, evoking former president Bill Clinton’s legendary displays of empathy. “Only my father will say, ‘I’ll fight for you.’ ”

Donald Trump picked up from his daughter by saying he is ready to go to work for the country.

“It’s time to deliver a victory for the American people,” he said. “But to do that, we must break free from the petty politics of the past. America is a nation of believers, dreamers and strivers that is being led by a group of censors, critics and cynics.”