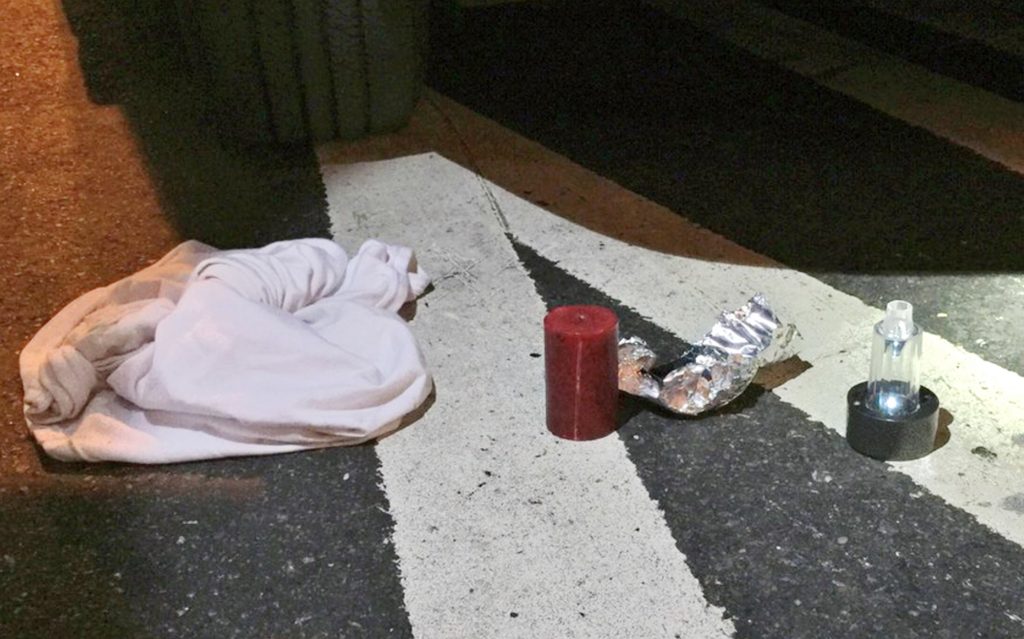 A man who tossed a hoax bomb through the open window of a police vehicle in Times Square was taken into custody Thursday after an overnight, eight-hour standoff in Columbus Circle.

The episode began cabbie Hector Meneses, 52, of Queens, drove by in his taxi and tossed a cylindrical object into the police van late Wednesday. The two occupants got nervous when they saw flashes and heard clicking coming from the object.

Sgt. Hameed Armani, who was driving the van, sped to a less crowded neighborhood to avoid casualties if it exploded.

“I look around, saw a lot of kids, a lot of young people,” Armani, a Muslim who immigrated from Afghanistan a decade ago, said at a news briefing. “We both look at each other and I go, ‘We’re going to go, but I’m not going to have anyone else go with us.’”

His partner, Officer Peter Cybulski, said he was “nervous” as Armani drove to a less crowded spot. They gently laid the object on the sidewalk and called for the bomb squad.

The object turned out to include a candle and a harmless electrical component. A police photo showed them displayed beside foil and white cloth.

Officers spotted the suspect’s SUV at around 2 a.m. at Columbus Circle and pulled it over. Meneses “rolls up the window, puts his hands towards the glove compartment and says that he wants to die and has a bomb strapped to his vest,” said Bill Aubry, chief of Manhattan detectives.

Aubry said the man put on a red helmet and continued to act erratically. He shifted back and forth between the driver’s and front passenger’s seat, refusing to respond to SWAT officers yelling at him through a megaphone. Surrounding streets were closed and subway trains bypassed the area, a traffic circle at the southwest corner of Central Park that is home to the Time Warner Center and the Trump International Hotel and Tower.

The standoff ended around 8 a.m. after police sent a robot to check out the man’s SUV because they didn’t know what was inside it. the bizarrely dressed Meneses was then pepper-sprayed and dragged out of his SUV.

No bomb or explosive was discovered in the vehicle.

“We live in a city where unfortunately the unexpected is to be expected and we saw that this morning,” Bratton said.