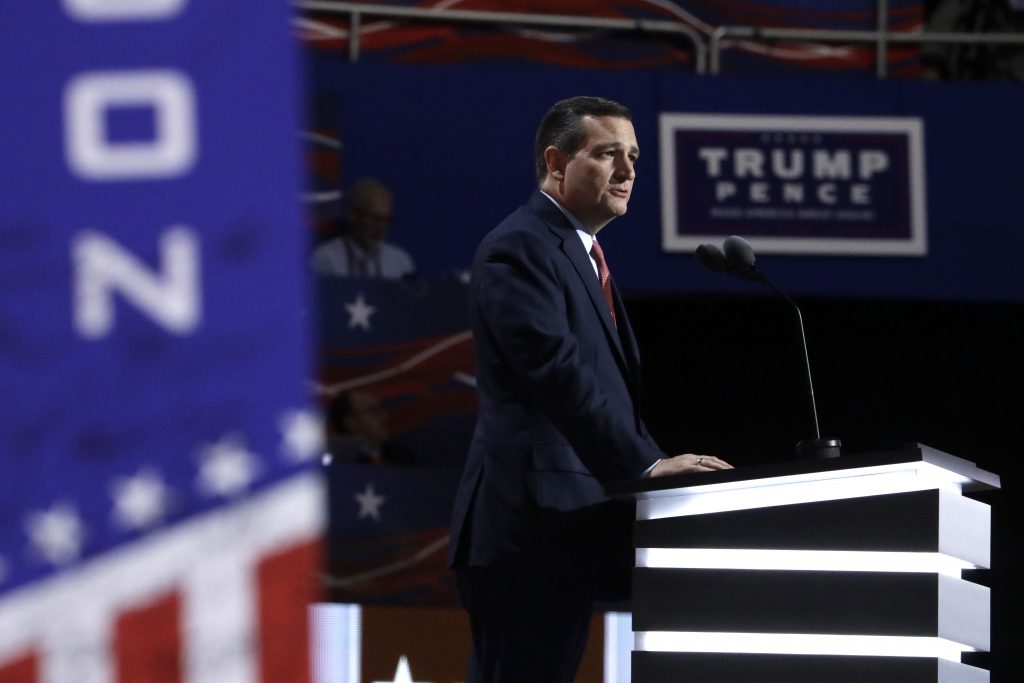 CLEVELAND (AP) — A night after being booed off the Republican National Convention stage, Texas Sen. Ted Cruz remained defiant about Donald Trump Thursday, saying he is not a “servile puppy dog” and vowing not to support anyone who wages personal attacks against his family.

Speaking to an incensed Texas delegation, Cruz recalled an answer he gave at a Republican debate this year, when he enthusiastically said he would support the party’s official nominee.

“The day that was abdicated was the day this became personal,” Cruz said. “I’m not going to get into criticizing or attacking Donald Trump, but I’ll give you this response: I am not in the habit of supporting people who attack my wife and attack my father.”

“And that pledge was not a blanket commitment that if you go and slander and attack [family members], I’m going to nonetheless come like a servile puppy dog and say thank you very much for maligning my wife and my father,” he added.

Cruz tried to link arms with Republicans at the party’s national convention Wednesday but was booed lustily by delegates when he ended his speech without offering Trump his endorsement or even saying he would vote for the New York billionaire.

The blatant sign of disunity in prime time angered the Trump campaign, with top adviser Paul Manafort saying Cruz “used very bad judgment” and was “not respectful to the invitation by the convention to come and speak.”

Manafort told the NBC on Thursday that Cruz “understood what the responsibilities are, someone in his position.”

As he appeared on stage Wednesday night, Cruz basked in a minute-long standing ovation. Cruz finished second to Trump in the crowded Republican primary campaign and congratulated the GOP nominee on his victory.

But the closest Cruz came to saying he wanted Trump to win the White House was when he said: “I want to see the principles that our party believes in prevail in November.”

Cruz didn’t tell the convention crowd that he plans to vote for Trump. Nor did he ask his supporters, hundreds of whom encouraged him to run for president in four years at an event on Wednesday afternoon, to vote for the newly minted Republican nominee.

Interrupted by chants of “Trump, Trump, Trump,” Cruz paused and said with a smile, “I appreciate the enthusiasm of the New York delegation.”

But as Cruz ended his remarks, and as the crowd of more than 2,000 delegates at the Quicken Loans Arena waited for Cruz to say something — anything — kind about Trump, he demurred.

“And to those listening, please, don’t stay home in November,” Cruz said. “Stand and speak, and vote your conscience. Vote for candidates up and down the ticket who you trust to defend our freedom and to be faithful to the Constitution.”

The delegates responded with angry boos, and Cruz backer and former Virginia Attorney General Ken Cuccinelli escorted Cruz’s wife off the convention floor as she was heckled by Trump delegates.

But Trump said later that Cruz’s lack of an endorsement was “no big deal!” But he said Cruz “didn’t honor” the pledge that Republican primary candidates had made to support the eventual GOP nominee.