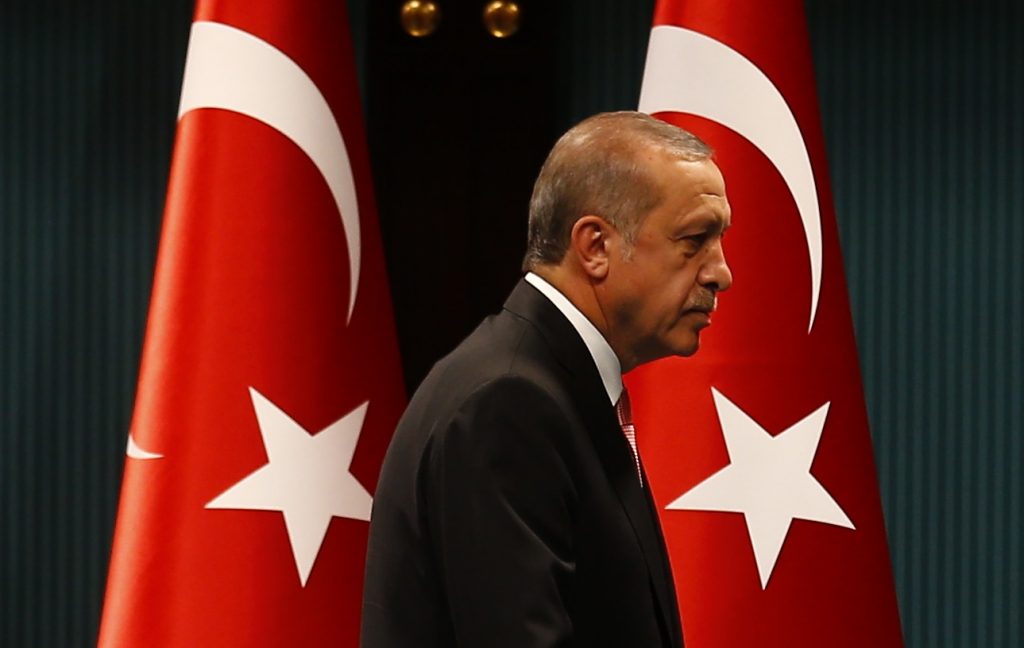 Turkish President Tayyip Erdogan declared a state of emergency on Wednesday as he widened a crackdown against thousands of members of the security forces, judiciary, civil service and academia after a failed military coup.

Erdogan said the state of emergency, which would last three months, would allow his government to take swift and effective measures against supporters of the coup and was allowed under the constitution.

The state of emergency would go into force after it is published in Turkey’s official gazette and would allow the president and cabinet to bypass parliament in passing new laws and to limit or suspend rights and freedoms as they deem necessary.

Erdogan made the announcement during a live broadcast in front of government ministers after a nearly five-hour meeting of the National Security Council.

“The aim of the declaration of the state of emergency is to be able to take fast and effective steps against this threat against democracy, the rule of law and rights and freedoms of our citizens,” Erdogan said.

About 60,000 soldiers, police, judges, civil servants and teachers have been suspended, detained or are under investigation since Friday’s military coup attempt.

The failed putsch and the purge that followed have unsettled the country of 80 million, which borders Syria’s chaos and is a Western ally against Islamic State.

Before announcing the state of emergency, Erdogan said the sweep was not yet over and that he believed foreign countries might have been involved in the attempt to overthrow him.

Speaking through an interpreter in an interview with broadcaster Al Jazeera, Erdogan dismissed suggestions that he was becoming authoritarian and that Turkish democracy was under threat.

“We will remain within a democratic parliamentary system. We will never step away from it,” he said.

Academics were banned from travelling abroad on Wednesday in what a Turkish official said was a temporary measure to prevent the risk of alleged coup plotters in universities from fleeing. State TRT said 95 academics had been removed from their posts at Istanbul University alone.

Erdogan blames a network of followers of a U.S.-based cleric, Fethullah Gulen, for Friday night’s attempted coup, in which more than 230 people were killed as soldiers commandeered fighter jets, military helicopters and tanks to try to overthrow the government.

Erdogan, who has led Turkey as prime minister or president since 2003, has vowed to clean the “virus” responsible for the plot from all state institutions. The depth and scale of the purges have raised concern among Western allies that Erdogan is trying to suppress all dissent, and that opponents unconnected with the plot will be caught in the net.

Around a third of Turkey’s roughly 360 serving generals have been detained since the coup attempt, a second senior official said, with 99 charged pending trial and 14 more being held.

The DefenSe Ministry is investigating all military judges and prosecutors and has suspended 262 of them, broadcaster NTV reported, while 900 police officers in the capital Ankara were also suspended on Wednesday. The purge also extended to civil servants in the environment and sports ministries.

The threat of prolonged instability in a NATO member country, which had not seen a violent military coup for more than three decades, has shaken investors’ confidence.

The lira fell to a record low after ratings agency Standard & Poor’s cut Turkey’s foreign currency credit rating, citing the fragmentation of the political landscape and saying it expected a period of heightened unpredictability. The Istanbul stock index is down 9.5 percent so far this week, its worst three-day performance since 2013.

Seeking to prevent damage to the economy, Erdogan said in his address that his government would not abandon fiscal discipline and that it was not facing liquidity problems.

Around 1,400 people were wounded as soldiers commandeered tanks, attack helicopters and warplanes, strafing parliament and the intelligence headquarters and trying to seize the main airport and bridges in Istanbul on Friday night.

At the height of the abortive coup, the rebel pilots of two F-16 fighter jets had Erdogan’s plane in their sights as he returned to Istanbul from a holiday on the coast. Erdogan said he was almost killed or captured by the mutineers.

Turkey’s Western allies have expressed solidarity with the government over the coup attempt but have also voiced increasing alarm at the scale and swiftness of the response, urging it to adhere to democratic values.

On Tuesday, authorities shut media outlets deemed to be supportive of Gulen. More than 20,000 teachers and administrators have been suspended from the Education Ministry. One hundred intelligence officials, 492 people from the Religious Affairs Directorate, 257 at the prime minister’s office and 300 at the Energy Ministry have been removed from duty.

Those moves come after the detention of more than 6,000 members of the armed forces, from foot soldiers to commanders, and the suspension of close to 3,000 judges and prosecutors. About 8,000 police officers, including in the capital Ankara and the biggest city Istanbul, have also been removed.

U.N. High Commissioner for Human Rights Zeid Ra’ad Al Hussein voiced “serious alarm” on Tuesday at the mass suspension of judges and prosecutors and urged Turkey to allow independent monitors to visit those who have been detained.

The Foreign Ministry has said criticism of the government’s response amounts to backing the coup attempt.

Erdogan’s spokesman said on Tuesday the government was preparing a formal request to the United States for the extradition of Gulen. President Barack Obama discussed the status of Gulen in a telephone call with Erdogan on Tuesday, the White House said, urging Ankara to show restraint as it pursues those responsible for the failed coup.

Gulen, 75, whose religious movement blends conservative Islamic values with a pro-Western outlook, lives in self-imposed exile in Pennsylvania but has a network of supporters within Turkey. He has condemned the abortive coup and denied any role in it.

A former ally-turned critic of Erdogan, he suggested the president staged it as an excuse for a crackdown after a steady accumulation of control during 14 years in power.

Washington has said it would consider Gulen’s extradition only if clear evidence was provided, prompting Prime Minister Yildirim to accuse the United States of double standards in its fight against terrorism.

Erdogan struck a more conciliatory note in his comments to Al Jazeera, saying he did not want to link the issue of U.S. use of Turkey’s Incirlik airbase with Ankara’s request for Gulen’s extradition.

The airbase is key to the U.S.-led fight against Islamic State.

“We need to be more sensitive. Relations between our countries are based on interests, not feelings. We are strategic partners,” Erdogan said.

Any extradition request would face legal and political hurdles in the United States. Even if approved by a judge, it would still have to go to Secretary of State John Kerry, who can consider non-legal factors, such as humanitarian arguments.