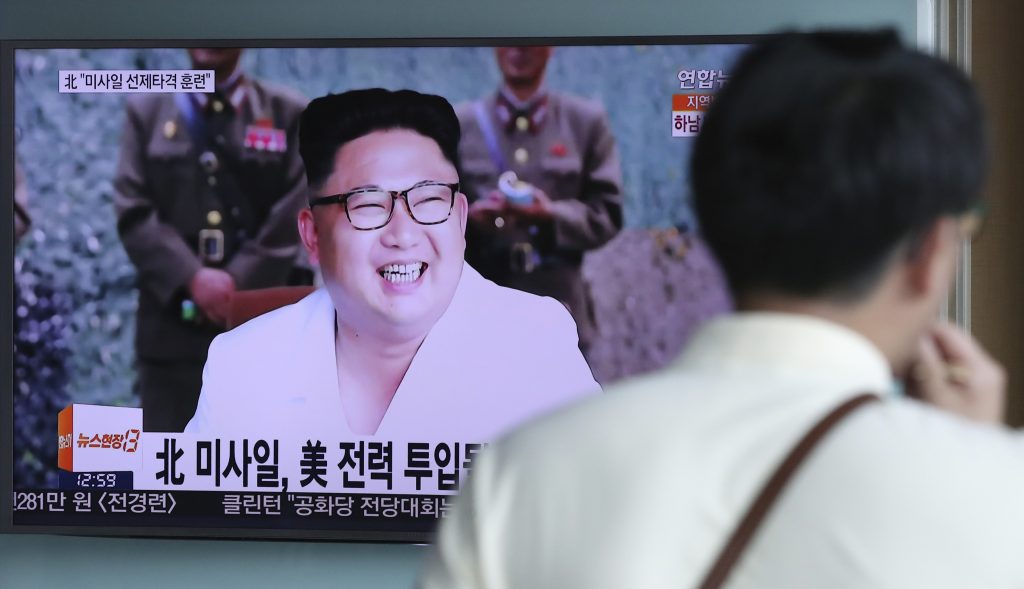 TOKYO (The Washington Post) – North Korea said Wednesday that it had been practicing to blow up South Korean ports and airports with nuclear warheads during its most recent ballistic missile launches, the latest sign of Pyongyang’s anger over attempts to contain it.

North Korea launched three missiles – two short-range Scuds and one medium-rang Rodong – from a launch site south of Pyongyang early Tuesday morning. They flew about 350 miles across the peninsula to land in the sea off the east coast, and South Korean military officials said they had the potential to hit even the southernmost parts of the country.

The launches were part of a drill overseen by Kim Jong Un, the third-generation leader of the country who bears the official title of “Supreme Commander of the Korean People’s Army.”

The drill rehearsed “making preemptive strikes at ports and airfields in the operational theater in south Korea, where the U.S. imperialists nuclear war hardware is to be hurled,” the North’s official Korean Central News Agency said Wednesday.

In response to North Korea’s provocations this year – January’s nuclear test and the steady stream of missiles that have followed it – South Korea has agreed to host a sophisticated anti-missile system, despite the strong objections of China, a key trading partner.

The United States and South Korea this month finalized the details for deploying a terminal high-altitude area defense (THAAD), battery to South Korea that would be operated by U.S. forces stationed there. It is designed to intercept incoming missiles.

The decision has also been controversial in South Korea, particularly in the rural area of Seongju, about 130 miles southeast of Seoul, which has been chosen as the site for the battery. Residents pelted the South Korean prime minister with eggs when he visited last week to try to alleviate their concerns that they would become a target for North Korea.

The North has been putting out a steady stream of invective over the South Korean government’s increasingly assertive response, at the same time as boasting of making technological breakthroughs in its nuclear weapons program.

North Korea has proven it has nuclear devices and has also shown advances in its missile program, although progress hasn’t always been smooth. Most of the six intermediate-range Musudan missile tests carried out in recent months have been failures.

Despite North Korea’s boasts, there is considerable doubt about whether North Korea has mastered the next, difficult steps: making nuclear warheads small enough to mount on a missile, and then being able to deliver it. While many analysts, and a considerable number of American officials, think that it’s just a matter of time until the North can do this, there’s been no evidence to suggest they’re there yet.

But North Korea has continued to pump out statements that increase tension on the peninsula, where the two sides remain technically at war, more than 60 years after the Korean war.

“Kim Jong Un expressed great satisfaction over the successful drill,” the KCNA statement said, and he praised the soldiers for being “fully ready to carry out any order issued all of a sudden.”