German authorities have identified a man shown in a video released by the Islamic State group as the teenage Afghan refugee who committed a terror attack using an ax on a German train, a German official told dpa Tuesday, establishing an apparent link between the terror group and the attack.

“The man in the video is the Wuerzburg assailant,” a spokesman for Bavarian Interior Minister Joachim Herrmann said, referring to a video posted online by the Aamaq News Agency, an Islamic State mouthpiece.

In the video, the terrorist waved a knife and claimed in Pashto to be a “holy warrior” of the group with the intention of carrying out an attack in Germany.

Late Monday, the 17-year-old terrorist, whose name has been withheld by authorities, attacked people with an ax and a knife on a regional train heading towards the Bavarian city of Wuerzburg in southern Germany.

Four of the five victims were members of the same family visiting from Hong Kong. Two of the victims remained in the hospital with “acute and life-threatening injuries,” prosecutor Erik Ohlenschlager said.

The attack was aborted when the train was brought to an emergency halt and the terrorist fled the scene, attacking a woman who was walking her dog nearby. Police shot and killed him shortly thereafter.

Aamaq said in a statement that the 17-year-old “carried out the operation in response to calls to target states in the coalition fighting Islamic State.” 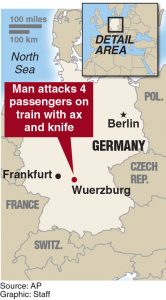 The terror attack renewed calls for stricter controls on asylum-seekers in Germany.

“What is clear is that we must keep tighter control over what comes into our country,” Herrmann told public broadcaster ARD. “We have to limit the influx and thereby be able to really deal intensively with those who have a right to asylum, and make sure that they don’t get out of hand like this.”

The terrorist registered as a refugee in the southeastern city of Passau in June 2015 and received a residence permit three months ago, authorities said.

He had been living in a home for young refugees until he was placed with a foster family in a town near Wuerzburg two weeks ago, according to Herrmann.

“Witnesses have not described him as in any way radicalized or fanatic,” Herrmann said. “He went to mosques on Muslim holidays but did not seem particularly devout.”

Prosecutors said that the teenager had learned over the weekend that a friend had been killed in Afghanistan, and that his host family had noted a change in behavior since then.

Authorities found a hand-painted Islamic State flag and Pashto-language writings in his room, including a goodbye note to his father and a text calling on Muslims to arm themselves.

Police investigator Lothar Koehler said the teen had posted a “cryptic message” on social media 24 hours before the attack in which he mentioned the “enemies of Islam.”

In the Pashto writings found in his room, he expressed the hope that he would be able to “take revenge on the infidels and … go to heaven,” Koehler said, reading the translated statement aloud at a news conference.

Similar attacks in Germany have been linked to radical forms of Islam. In May, a man allegedly shouted “Alla-hu Akbar” before killing one person and wounding three at a train station near Munich.