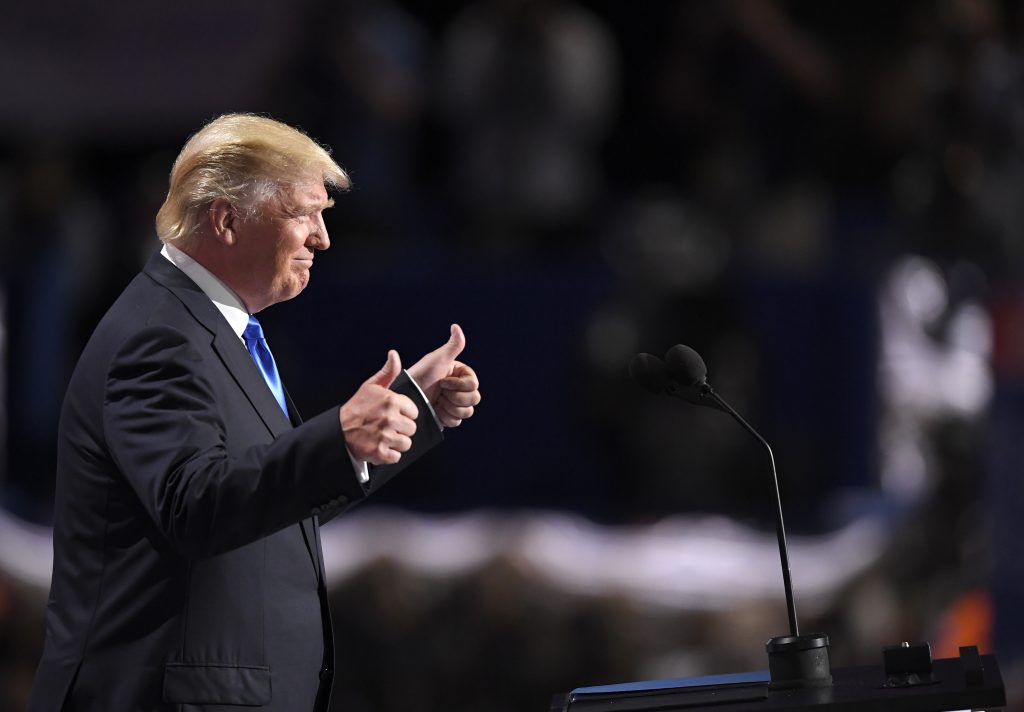 Barring a last-minute jolt to the proceedings, Donald Trump is hours away from attaining the 2016 presidential nomination despite efforts to stop him that spilled messily into the opening of the Republican National Convention. As his wife put it from the stage, “It would not be a Trump contest without excitement and drama.”

She generated a lot of buzz with her well-received speech and, later, a controversy over some of her remarks. Two passages of her address matched nearly word-for-word the speech that Michelle Obama delivered in 2008 at the Democratic National Convention.

Senior Trump adviser Paul Manafort dismissed the criticism as “just absurd,” and insisted that she used “words that are common words.” The campaign said the speech was written by a “team of writers” who included fragments that reflected Mrs. Trump’s thinking.

For a time Monday, the Cleveland arena resembled the convention-floor battles of old as aggrieved anti-Trump Republicans protested the adoption by voice vote of rules aimed at quashing an already flailing effort to deny him the prize. Instead of a manicured message of unity, viewers saw the fractured face of a party still coming to grips with the polarizing man of the moment.

But to borrow the parlance of Trump the businessman, the deal will almost certainly be sealed Tuesday night.

That’s when the roll call of states is set to unfold, delivering the delegates to make him the standard-bearer after a rollicking primary season that saw him vanquish 16 rivals. Typically in both parties, the roll call is heavy with ceremonial flourishes, good cheer and puffery about the virtues of each state. This time, it’s also another opportunity for discord to be heard.

On Monday, the floor fight gave way to a lineup of hard-edged, prime-time speeches in which Republicans painted a grim picture of the country’s future and an evener darker view of Democratic rival Hillary Clinton.

Speakers accused Clinton of lying, “putting all of our children’s lives at risk,” and threatening the nation’s security.

The White House declined to comment on the similarity between the speech of Trump and Michelle Obama Tuesday morning, but was expected to answer questions about the similarities in the remarks later in the day.

Mrs. Trump’s speech was part of a four-day campaign to show the softer side of the tough-talking showman. On Tuesday night, two of Trump’s children will pick up where she left off. Tiffany Trump, Trump’s 22-year-old daughter, and Donald Trump Jr., his eldest son and an executive vice president at The Trump Organization, will take the podium.

Themes of the four-day event are all rooted in Trump’s Make America Great Again slogan: safe again, work again, first again and one again, in turn.

Safety was first on tap, and a succession of speakers cast Trump as the leader for perilous times and Hillary Clinton as the embodiment of a system that has left America vulnerable — or worse.