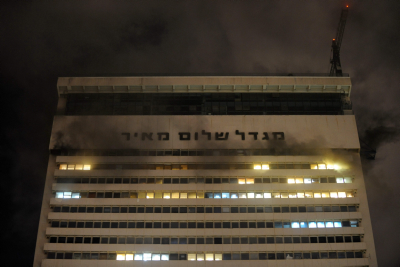 Security forces are conducting a major defense exercise in the middle of Tel Aviv’s business district Tuesday morning. The drill, centered around the Shalom Tower skyscraper and the financial district around Herzl Street, will entail numerous security vehicles and hundreds of soldiers and police. Traffic, usually awful in the area already, is expected to get even worse, as Herzl Street and other roads wil be closed for at least two hours.

Overnight Monday, security officials said they arrested 14 wanted security suspects in Yehudah and Shomron. The suspects were wanted for participating in rioting and throwing stones and firebombs that endangered Israeli civilians and IDF soldiers. Several of the suspects were also charged with belonging to Hamas. All were being questioned on their activities by security forces.

Last week, police and Shin Bet forces said they had arrested two 15-year-old Jewish residents of Yehudah and Shomron on suspicion of participating in “price tag” attacks, after the murders of four Jews by terrorists at Sarona Market in Tel Aviv last month. The two are accused of setting Arab vehicles on fire, of slashing tires, and scrawling graffiti.

The two have complained to their attorneys that they are being treated in a violent manner by the officials. The two said that they were beaten several times, and that they were prevented from meeting with attorneys. The Honenu rights group, which is representing the youths, said it was investigating the allegations.