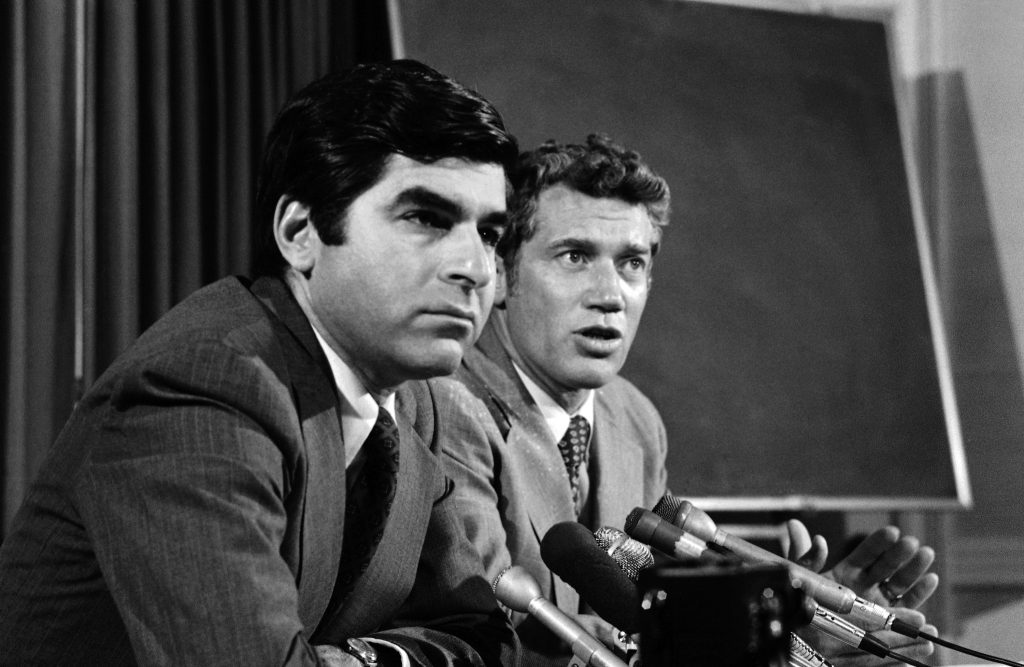 Former Minnesota Gov. Wendell Anderson, a former U.S. Olympian who was described in a 1973 Time magazine cover article as the youthful embodiment of his home state only to lose public confidence later by arranging his own appointment to the U.S. Senate, died Sunday. He was 83.

Gov. Mark Dayton’s office said Anderson’s family and friends were with him when he died at Our Lady of Peace hospice care in St. Paul. A Dayton spokesman didn’t know the cause of death.

Anderson was first elected governor in 1970 at the age of 37.

The next year, he pushed through an overhaul of school aid and taxes that became known as the “Minnesota miracle.” In a special legislative session that stretched more than five months past normal deadlines, Anderson outmaneuvered the conservative-dominated Legislature by rejecting an alternate tax plan he called “the old way of doing things.” The victory gave him latitude to pursue Democratic priorities such as environmental safeguards, a minimum-wage increase and programs for housing, seniors and substance abuse.

“That is our mandate: to make our government more responsive to the people and more imaginative in the service of their needs,” Anderson said in his inaugural address in 1971.

The outdoorsy governor familiarly known as “Wendy” landed on the cover of the Aug. 13, 1973 issue of Time, shown hoisting a trophy fish over the headline “The Good Life in Minnesota.” The story inside called Anderson a “Midwestern Kennedy.”

“Like the state itself, Anderson can sometimes seem almost too good to be true,” it said.

Anderson brought a star quality to the state’s top job, with his wife, Mary, and three young children, Amy, Elizabeth and Brett. He appeared in newspaper photographs jogging, hitting a baseball and tromping around in a parka with a fur collar. One Minneapolis Star columnist said he was so good on media that “it’s possible people don’t even hear what he’s saying.” Way back in 1971, press reports said he had a car phone that used radio frequencies for a range of 30 miles from downtown Minneapolis.

“His whole approach to things was just so fresh and different and pretty amazing,” said Michele Kelm-Helgen, a former aide to Dayton, who grew up visiting Anderson’s office where her father, Thomas Kelm, served as chief of staff.

Anderson pressed to have legislative candidates run as Republicans and Democrats, calling the nonpartisan Legislature a “long-standing fiction of Minnesota political life.” He got his wish starting in 1974.

The son of a sausage delivery truck driver, Anderson was born on Feb. 1, 1933, in St. Paul, where he grew up on the city’s blue-collar East Side. He played hockey at Johnson High School and the University of Minnesota, where he got his law degree while serving in the Legislature. He was an Army infantry officer and won a silver medal as a member of the U.S. hockey team in the 1956 Olympics.

He jumped into politics young, winning his first election to the Minnesota House in 1958 when he was just 25 and moving up to the state Senate four years later. He headed Vice President Hubert H. Humphrey’s Minnesota presidential campaign in 1968 before running for governor in 1970.

“He is basically one of those guys who never forgot where he came from,” said Warren Spannaus, a longtime friend from St. Paul, who worked on Anderson’s first campaign and won the attorney general’s office the same year Anderson became governor.

Anderson crushed his Republican opponent, John Johnson, by a better than 2-to-1 margin to win a second term in 1974. Talk soon began about a future in national politics. Anderson joined the Democratic National Committee’s executive committee and became chairman of the party’s platform committee.

“There is no longer money for everything,” he said in his second inaugural address in 1975, focusing on national concerns such as oil and inflation. “We can afford neither the luxury of folly nor the folly of luxury.”

Anderson’s comments about cutting back haunted him later during a “Meet the Press” grilling, when he struggled to name state programs he had eliminated. Republicans dubbed him “Spendy Wendy.” And his frequent trips abroad prompted then-President Gerald Ford to joke during a Minnesota visit that Anderson had asked him how to get to the state Capitol.

Anderson’s fall began in 1976, when he orchestrated his own appointment to the Senate. U.S. Sen. Walter Mondale of Minnesota had just been elected Jimmy Carter’s vice president, leaving an open seat. Anderson resigned as governor on Dec. 26, 1976, so that Lt. Gov. Rudy Perpich could become governor and name him to fill Mondale’s seat.

Anderson announced plans to run for the seat in 1978, adding, “I don’t fear submitting my name to the vote of the people.”

But the self-appointment was unpopular from the beginning. He apologized in an ad, saying, “Many tell me it was a mistake, and I accept your judgment.” Voters rejected Anderson by a wide margin in 1978, electing Republican Rudy Boschwitz instead.

Friends said Anderson longed to return to the political life, but it wasn’t to be. He sought the Democratic-Farmer-Labor Party’s endorsement for a rematch with Boschwitz in 1984, but dropped out after finishing last in a field of four. He served on the University of Minnesota Board of Regents, practiced law and pursued business ventures. He also served as Sweden’s honorary consul to Minnesota. Anderson and his wife, Mary, divorced, and by the early 1990s, his debts made the newspapers. He modeled exercise equipment and a sweatshirt.

But his friend, former Democratic Senate Majority Leader Roger Moe, has said Anderson should be remembered for what he accomplished.

“His tenure as governor will go down in the history books as probably the six most productive years in terms of progressive, forward-looking state government,” Moe said.