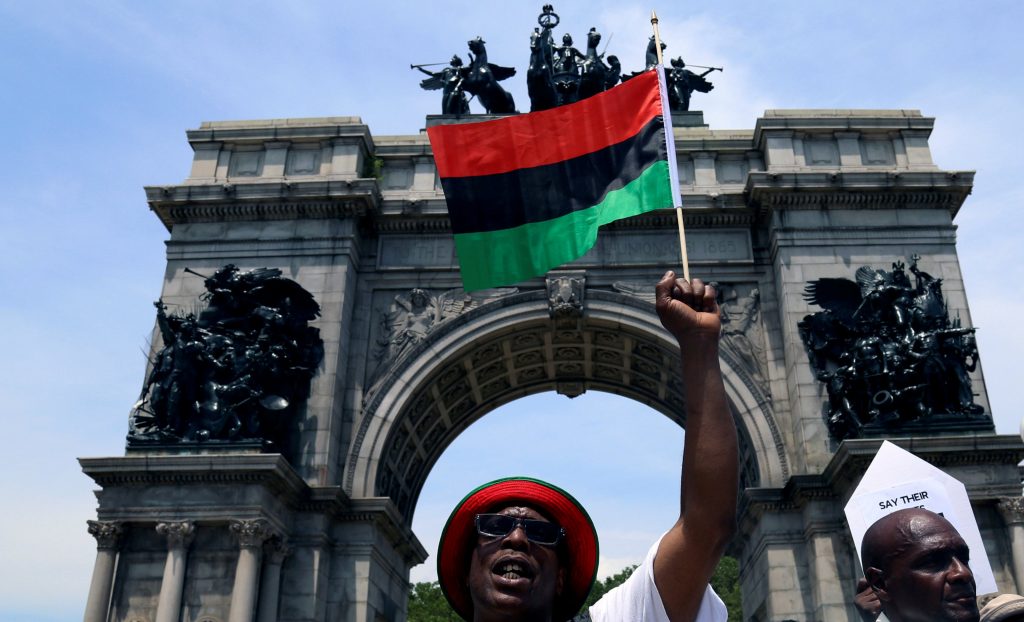 Two years after the chokehold death of Eric Garner made “I can’t breathe” a rallying cry for protests over police killings of black men, federal authorities are still grappling with whether to prosecute the white officer seen on a widely watched video wrapping his arm around Garner’s neck.

The legal limbo is playing out on the watch of Attorney General Loretta Lynch, who has come under persistent pressure in the city and elsewhere to bring Officer Daniel Pantaleo to justice. The New York City case turned out to be a forerunner to a series of videotaped police killings across the country that have fueled outrage and protests.

Before becoming attorney general, Lynch ran the U.S. attorney’s office in Brooklyn, which initiated the review of Garner’s case after a state grand jury refused to indict Pantaleo in 2014, and she personally met with Garner’s family in that role. Questioned by Congress this week, she said the Garner investigation remains open but gave no indication of how or when a decision will be made.

Last year, the city agreed to pay $5.9 million to settle the family’s wrongful death claim, but the push for a federal case has persisted. Garner’s siblings performed a rap song called “I Can’t Breathe” that was released to mark the second anniversary of his July 17, 2014 death, and his mother, Gwen Carr, has proposed converting a small park across the street from where he died into a playground named after him.

“What’s in my heart is to keep my son’s name alive,” Carr said. “This is my work for the rest of my life.”

A resolution has been hampered by a behind-the-scenes disagreement over the direction of the federal investigation of Garner’s death in Staten Island, according to two people with inside knowledge. On one side are prosecutors in Lynch’s former office in Brooklyn, who aren’t sure there’s enough evidence to charge Pantaelo at the federal level. On the other side are their counterparts in the Justice Department’s Civil Rights Division in Washington, who feel more confident in forging ahead.

Both people were not authorized to discuss the decision-making process and spoke on condition of anonymity.

Officials at the Justice Department declined to comment for this article.

Internal Justice Department disputes about the strength of such cases happen “more often than you think,” said David Weinstein, a former federal prosecutor in Miami who specialized in civil rights matters.

The nearly 100 U.S. attorneys’ offices in the country are mostly given great autonomy, but Washington attorneys don’t hesitate to get deeply involved when a matter falls within the jurisdiction of their specialized divisions like civil rights, Weinstein said. The two sides usually work out differences on their own, but if not, Justice Department leadership can often get its way because “whether they like it or not … all U.S. attorneys answer to the attorney general,” he said.

The disagreements reflect the challenge of finding enough evidence to prove an officer willfully deprived a citizen’s civil rights, said Samuel Bagenstos, the former No. 2 official at the Civil Rights Division. Historically, the high legal bar has prevented prosecutors from charging most officers who kill unarmed men, including the one who shot Michael Brown in Ferguson, Missouri.

“These are hard cases to prove,” Bagenstos said. “That can create a lot of difficult conversations within the department about them.”

For Garner’s family and its supporters, the cellphone video shot by a bystander capturing the last moments of his life has always been evidence enough.

“It’s been two years,” the Rev. Al Sharpton said at recent gathering with Garner’s family. The fatal encounter “was on video and we’ve not seen justice. So that’s why people are questioning what’s going on now.”

Sharpton led a march through Brooklyn Saturday and vowed to keep marching against injustice until a culture of mistreating black people ends.

The video shows 43-year-old Garner, after being stopped by officers for selling loose, untaxed cigarettes, telling the officers to leave him alone and refusing to be handcuffed. Pantaleo responds by putting Garner in an apparent chokehold, which is banned under NYPD policy, as he was taken to the ground. The heavyset Garner, who had asthma, is heard gasping, “I can’t breathe.” He later was pronounced dead at a hospital.

The medical examiner ruled Garner’s death a homicide caused in part by the chokehold. But police union officials and Pantaleo’s lawyer have argued that the officer used a takedown move taught by the police department, not a chokehold, and that Garner’s poor health was the main reason he died.

Under the circumstances, “a federally protected civil right wasn’t violated,” Pantaleo’s lawyer, Stuart London, said this week. “This was a simple street encounter where the officer performed his duties as he was trained.”

The officer remains on desk duty as the New York Police Department awaits the outcome of the federal probe before deciding whether to discipline him on its own.