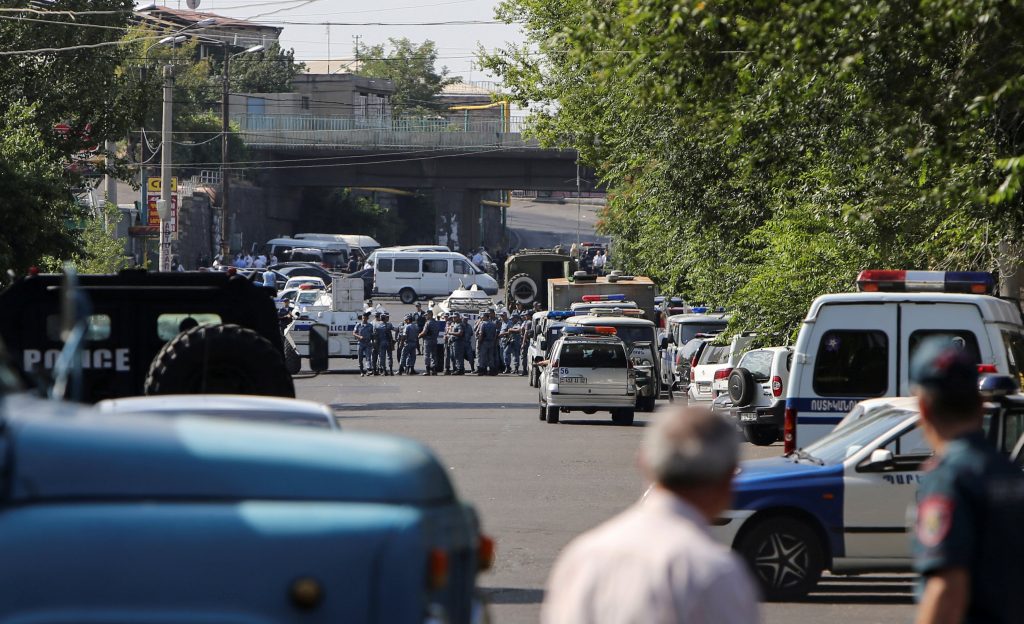 Armed men seized a police station and hostages in Armenia’s capital Yerevan on Sunday, demanding Armenians take to the streets to press their demands for the release of opposition politicians they said had been jailed unfairly.

Armenians news agencies reported that the armed men were demanding that President Serzh Sargsyan resign. Reuters could not immediately confirm that assertion.

One of their main demands was to free Jirair Sefilian, an opposition politician whom the authorities have accused of plotting civil unrest. Sefilian was jailed in June over allegations of illegally possessing weapons.

Sefilian, a former military commander, has strongly criticized Sargsyan in the past, saying he is unhappy about the way the government has been handling a long-running conflict between pro-Armenian separatists and the breakaway Azeri region of Nagorno-Karabakh.

Armenia’s security service said one policeman had been killed and two wounded in the violence, but that negotiations were now underway to resolve the standoff peacefully.

Photographs from the scene show the area ringed with white armored vehicles.

Though far smaller in scale, suggestions by one opposition politician that an armed uprising was underway stoked speculation that the hostage takers had drawn inspiration from the unsuccessful coup attempt in neighboring Turkey.

The security service accused the hostage takers’ supporters of spreading false rumors on the internet about an uprising and the seizure of other buildings. Such assertions were pure “disinformation,” it said.

“The National Security Service officially announces that such information is absolutely untrue,” it said in a statement.

“Dear compatriots. It has started. We ask everyone to take to the streets,” one of the men said. “Our demand is to set free all political prisoners … and for them to be brought here.”

Another hostage-taker said: “The police station has been in our hands for three and a half hours. We have captured all the weapons. There is no other way. We appeal to you. Don’t leave us here alone. We are doing our bit – you do your bit.”

There were no immediate reports of crowds taking to the streets.

Several prominent Armenian political commentators said the men appeared to sympathize with the Founding Parliament opposition group, which they said does not enjoy wide support.

At least one other opposition group, Flourishing Armenia, denounced the violence and said the men were unlikely to inspire more than 50 people to take to the streets.