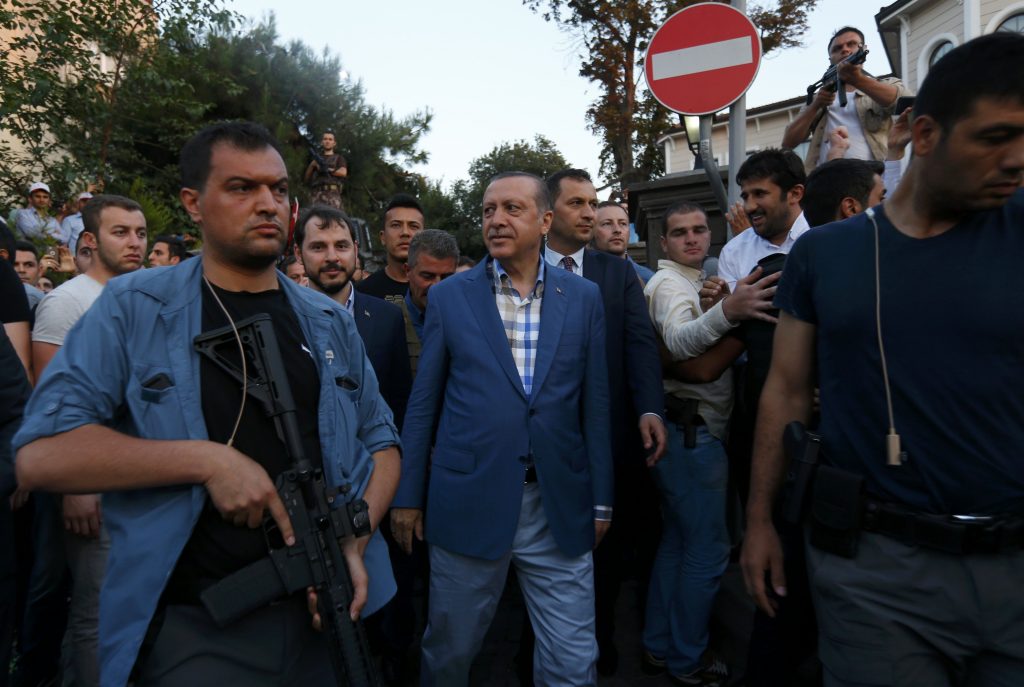 But Kerry added that Turkey’s government would have to present evidence of Gulen’s wrongdoing that withstands scrutiny.

While visiting Luxembourg, Kerry said Turkey hasn’t made a request to extradite the Pennsylvania-based Gulen. But he said he anticipates questions about Gulen, who has condemned the coup attempt.

Kerry said on Saturday the U.S. opposed any attempt to overthrow a democratically elected leader and change must come through a constitutional process.

Kerry told Turkish Foreign Minister Mevlut Cavosoglu on Saturday that public claims suggesting the United States was involved in the failed coup in Turkey were harmful to relations between the two NATO allies.

Kerry pressed Turkey to use restraint and respect the rule of law during its investigation into the plot, State Department spokesman John Kirby said in a statement.

“He made clear that the United States would be willing to provide assistance to Turkish authorities conducting this investigation, but that public insinuations or claims about any role by the United States in the failed coup attempt are utterly false and harmful to our bilateral relations,” Kirby said.

The Italian news agency ANSA Saturday further quoted Federica Mogherini as telling it and another Italian agency AGI in a joint interview that it is imperative that “a dangerous spiral of violence” isn’t fueled.

Mogherini was also quoted as calling on Turkey to respect the law, rule of law and democratic conventions, calling them “binding and inalienable principles” which are also the “best way to face the difficulties that Turkey is experiencing.”

British Foreign Secretary Boris Johnson said he had spoken to his Turkish counterpart, Mevlut Cavusoglu, to underline support for Turkey’s “democratic elected government and institutions” in the wake of the overnight coup attempt.

British Airways said it is canceling all flights to and from Turkey Saturday, but budget airline easyJet said it plans to runs its scheduled flights, largely to Turkish resort towns. The airline said the schedule “will be kept under continuous review.”

A statement from the Israeli Foreign Ministry said it respects the democratic process in Turkey and looks forward to the continued reconciliation between the countries.

Israel and Turkey recently struck a broad reconciliation pact to restore diplomatic relations after six years of animosity between the once-close Mideast powers following a deadly Israeli naval raid to stop a provocative flotilla aiming to breach the Gaza blockade.

Relations between Israel and Turkey began to decline soon after President Recep Tayyip Erdogan, whose party has Islamist roots, came to power in 2003.

Since then, Erdogan has sought closer ties with Muslim nations while trying to distance his country from Israel. Erdogan’s close ties with Gaza’s Islamic Hamas rulers have further strained ties.

Italian Foreign Minister Paolo Gentiloni said Turkish authorities must do their utmost to ensure “respect for the rule of law, of fundamental rights and of parliament’s role” following the failed military coup.

In a statement issued by the Foreign Ministry Saturday evening, Gentiloni expressed “relief” that Turkey thwarted what he calls a “military adventure that would have brought the country into chaos with the return of ghosts of the past.”

Gentiloni also said that, “prompt reestablishment of constitutional order and stability is urgent and necessary,” but that must occur without “indulging in the logic of violence.”

Merkel told reporters at the chancellery in Berlin on Saturday that it was “tragic that so many people paid for this coup attempt with their lives” and urged an end to the bloodshed.

She said “Germany stands on the side of all of those in Turkey who defend democracy and the rule of law.”

Russia’s Foreign Ministry expressed concern about tensions in Turkey in the wake of an attempted military coup.

“The aggravation of the political situation in the context of the terrorist threats existing in the country and armed conflict in the region carry a high risk to international and regional stability,” the Ministry said in a statement Saturday. “We call on the government and people of Turkey to solve the existing problems without violence, to respect the constitutional order.”

Tensions between Russia and Turkey have been strong since last fall when Turkey shot down a Russian warplane near the border with Syria. However, relations appeared to be moving toward repair after Turkish President Recep Tayyip Erdogan issued an apology for the incident last month.

An aide to Prime Minister Nawaz Sharif condemned the attempted coup in a statement and said Pakistan “hopes that peace and normalcy will be restored in Turkey.”

Pakistan’s main political parties have also praised the people of Turkey for foiling the coup.

Sharif was himself overthrown in a 1999 coup led by Gen. Pervez Musharraf, who ruled Pakistan until 2008.

A Pakistani non-profit organization organized a pro-Erdogan demonstration in the capital Islamabad to pay tribute to the Turkish people and their leader for foiling the coup attempt.

Dozens of supporters of the Khubaib Foundation, which works mainly on education and support of orphans, gathered near the National Press Club Saturday and chanted slogans in favor of the Turkish government and President Erdogan.

Holding Turkish and Pakistani flags and displaying banners written in Turkish and Urdu, demonstrators chanted “Long live the Turkish people.” One banner in Urdu read, “The Pakistani nation salutes the people of Turkey and Erdogan for sustaining democracy.”

The foundation’s chairman Nadeem Ahmed Khan said the Turkish people’s success in foiling the coup attempt is a triumph of democracy and human rights.

He says “without a doubt we support respecting the constitution and democratically elected institutions, and we condemn all coups without reservation.”

Garcia Margallo spoke by telephone from Mongolia, where he is attending the ASEM Asia-Europe Meeting.