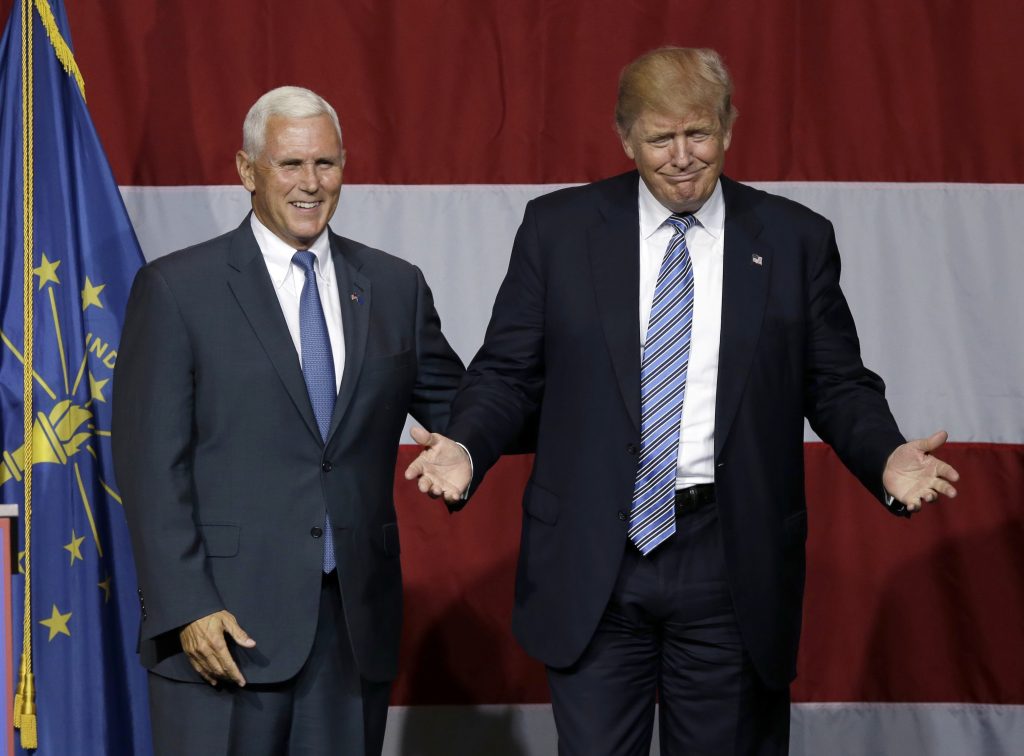 Donald Trump presented running mate Mike Pence to the nation Saturday, hailing the Indiana governor as his “first choice” and “my partner in the campaign.” But he left no doubt in a sometimes awkward event that Pence’s role will surely be as sidekick to the businessman-turned-reality-star-turned-politician at the top of the ticket.

Glancing at notes, Trump lauded Pence’s personal character and conservative credentials. Then he moved on to draw sharp contrasts between the newly formed Republican team and Democrat Hillary Clinton.

Yet the announcement lacked much of the stagecraft typically associated with the public unveiling of a running mate, one of the most significant moments under a presidential campaign’s control.

The only sign onstage in the Manhattan hotel ballroom bore only Trump’s name. The two men appeared together just briefly. And Trump, the presumptive Republican presidential nominee, spoke for nearly 30 minutes before calling Pence to the stage.

His far-ranging remarks devoted more time to recapping his primary victories — and he even found time to tout his new hotel in Washington — than introducing the relatively unknown Pence to America’s voters.

“All right, back to Mike Pence,” Trump said at one point after a long tangent talking about the Republican Party’s efforts to overturn rules that limit church leaders’ political involvement.

The event — the culmination of a vice presidential rollout that featured mixed signals, second-guessing and a 24-hour delay — was intended to assert that Trump and Pence would stand up to America’s enemies while being “the law-and-order candidates” at home.

“What a difference between crooked Hillary Clinton and Mike Pence,” Trump said. He added: “He’s a solid, solid person.”

Pence, standing alone in front of ten American flags, hewed closely to the populist themes that Trump has voiced on the campaign trail, describing himself as “really just a small-town boy.” He praised Trump effusively as “a good man,” a fighter, a legendary businessman and a patriotic American.

“The American people are tired,” Pence said in remarks that included many of the same talking points that until recently he was using in his bid for re-election. “We’re tired of being told that this is as good as it gets. We’re tired of having politicians in both parties in Washington, D.C., telling us we’ll get to those problems tomorrow.”

The joint appearance was meant to catapult the party toward a successful and unified Republican National Convention, which kicks off in Cleveland on Monday. Trump conceded that one of the reasons he’d selected Pence was to promote unity within the Republican Party, left deeply fractured by Trump’s ascent.

“One of the reasons is party unity, I have to be honest,” he said.

There was little hoopla — and no questions, though Trump on Thursday had billed the event as a news conference. In contrast, four years ago, Mitt Romney introduced running mate Paul Ryan on the deck of a Navy battleship, the USS Wisconsin, off the shore of swing state Virginia. With cheering flag-waving crowds and a soaring patriotic soundtrack, the pair faced the nation for the first time flanked by a massive red white and blue banner displaying their new campaign logo.

There were no newly printed banners or logos at the hotel ballroom event, which was set in a state that Trump has little chance of winning in November. The two men, instead of presenting an image of an emboldened, unified front, barely spent any time on stage together, as Trump quickly exited after greeting Pence with a perfunctory handshake and arm pat. He did return for a brief photo-op at the end.

The underwhelming rollout continued when Pence got back to Indiana, where a few hundred people greeted him at a suburban Indianapolis airport hangar bereft of any “Trump-Pence” signs or other obvious trappings of a presidential campaign. He spoke for only a few minutes, telling the crowd that he and his family were headed home for “pizza night.”

And that was exactly what Pence’s fans at home in Indiana expected.

“Even though the Trump rallies are big productions … for Mike Pence, this is his style: a little more understated, a little more traditional, a little more what you’d expect from a conservative,” said Dana Carroll of suburban Indianapolis.

The lead-up to the low-key Saturday was anything but smooth.

On Thursday, Trump had convened a midnight campaign conference call about his pick, even after he’d had Pence fly to New York to accept his offer.

He then announced the choice on Twitter, though the presentation event was postponed a day after the terror attack in Nice. Through no fault of the campaign, the show ended up on a Saturday morning, competing on media with two international crises: the aftermath of the France attack and news about an attempted military coup in Turkey.

Brandishing his running mate’s job-creating credentials, Trump — who pushed back against reports of indecision by deeming the governor “my first choice” — ticked through a list of statistics he said showed how Pence had pulled Indiana out of economic recession: an unemployment rate that fell to less than 5 percent on his watch, an uptick in the labor force and a decrease in Indiana residents on unemployment insurance.

“This is the primary reason I wanted Mike — other than that he looks very good, other than he’s got an incredible family, and incredible wife,” Trump said.

Just as Trump was settling on Pence, Republicans gathering in Cleveland essentially quelled the effort to stop him at the convention, all but assuring he’ll be the GOP nominee.

“They got crushed,” Trump said moments after praising party unity. “And they got crushed immediately, because people want what we’re saying to happen.”

The Indiana governor is well-regarded by evangelical Christians. But his hard line ideology is sometimes at odds with Trump. The two have had differing views on issues.

Clinton’s team was already painting Pence’s conservative social viewpoints as out of step with the mainstream. Her campaign also seized on Trump’s chaotic process for selecting and announcing his pick, painting him in a web video as “Always divisive. Not so decisive.”