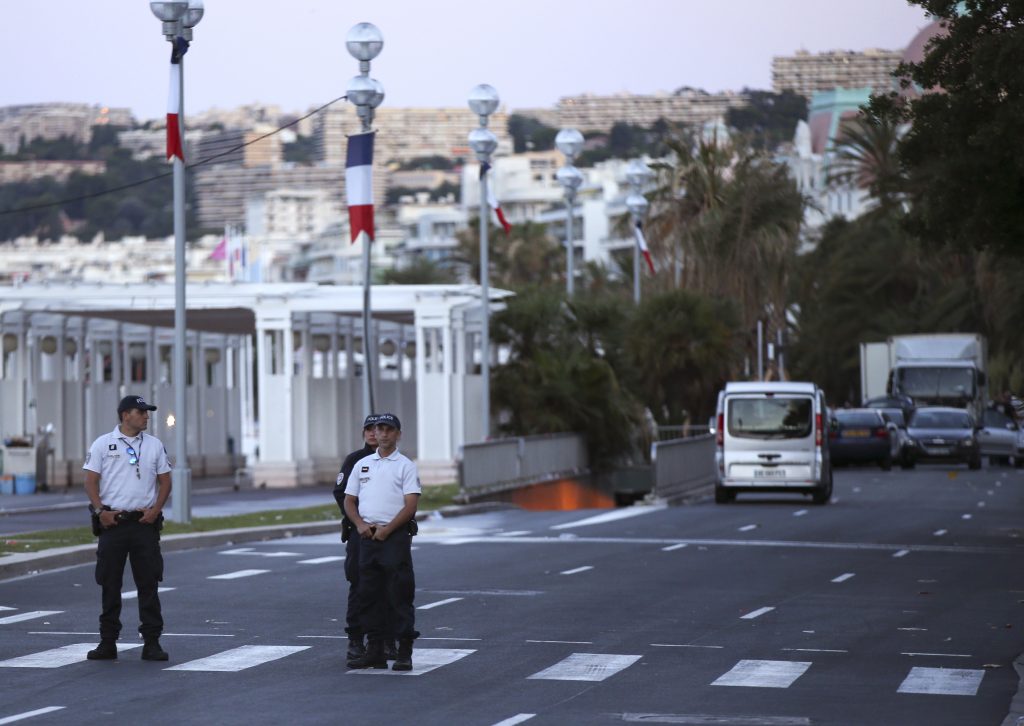 World leaders are expressing dismay, sadness and solidarity with France over the attack carried out by a man who drove truck into crowds of people celebrating France’s national day in Nice, killing at least 84 people:

President Barack Obama condemned what he called “the horrific attack in Nice. Our thoughts and prayers are with the families and other loved-ones of those killed,” he said.

Noting that the attack occurred on Bastille Day, Obama praised “the extraordinary resilience and democratic values that have made France an inspiration to the entire world.”

Secretary of State John Kerry called it a “horrendous attack in Nice. … I was proud to stand alongside French leaders earlier today at Bastille Day celebrations in Paris, and the United States will continue to stand firmly with the French people during this time of tragedy.”

Both presidential candidates also condemned the attacks, with Republican Donald Trump declaring “this is war” and Democrat Hillary Clinton vowing “we will not be intimidated.”

Clinton said that “every American stands in strong solidarity with the people of France, and we say with one voice: We will not be intimidated. We will never allow terrorists to undermine the egalitarian and democratic values that underpin our very way of life.”

Trump, who postponed plans to announce his vice presidential pick because of the attacks, said “this is war. If you look at it, this is war coming from all different parts. And frankly it’s war and we’re dealing with people without uniforms.”

European Council president Donald Tusk expressed consternation that France was attacked on its national day and said the world stands united with the French people.

“It is a tragic paradox that the victims of the attack [were] people celebrating liberty, quality and fraternity. We will stand united with the families of victims, the French people and the government in the fight against violence and hatred,” Tusk said at a meeting of Asian and European leaders in the Mongolian capital of Ulaanbaatar.

Premier Li Keqiang said “We strongly condemn terrorism of all forms. We express our condolences for the victims and we will fight all kinds of terrorism.”

Foreign Minister Didier Reynders expressed dismay that France was once again the target of an apparent terrorist attack.

Rivlin wrote, “It is with pain and sorrow that I must once again write and express my deepest condolences, and those of all the Israeli people, following the horrific terror attack in Nice.”

He added that “Israel stands with France and the Israeli people stand with the French people, shoulder to shoulder in the face of this terrible evil, as should the whole free world. We must work united to reach the terrorists, their supporters and backers, wherever they may hide. “

Prime Minister Binyamin Netanyahu said, “Israel condemns in the strongest terms [Thursday] night’s horrific attack in Nice. We are again reminded that terrorism can strike anywhere and must be fought everywhere.

“Israelis stand united with the people of France today. We join you in mourning those killed and wish a speedy recovery to the wounded.”

Netanyahu added that “Israel is ready to help the French government fight this evil until it is defeated.”

“I am appalled by the horrific attack in Nice. I strongly condemn such mindless acts of violence. My thoughts are with the families of the deceased.

I hope the injured recover soon. India shares the pain and stands firmly with our French sisters and brothers in this hour of immense sadness,” Modi said.

Prime Minister Nawaz Sharif said the government and people of Pakistan were deeply saddened by the attack. In a statement Friday he said “our hearts and prayers are with the victims of the attack and their families.

“Being the frontline state in the war against terror, Pakistan itself has suffered immensely and has seen a series of tragedies,” he said.

“It has shocked France, it has rocked it to its core,” Bishop told reporters in the Western Australia capital of Perth. “This should have been a time of great national pride and celebration.”

Bishop condemned the violence, saying it was a reminder that “no country is immune from terrorist attacks.”

“We support our friends and partners in France and we join with others around the world in hoping that this will be the end of this type of horrific incident that is targeted at unarmed civilians,” she said.

Foreign Minister José Manuel García-Margallo said he called his counterparts in France to express his condolences.

“We are very sorry and very much [feel] with the French people and the French government,” he said at a meeting of Asian and European leaders in the Mongolian capital of Ulaanbaatar.

Prime Minister Taavi Roivs condemned “a terrible attack on innocent people celebrating their national day. Today, we all stand together with the French people.”