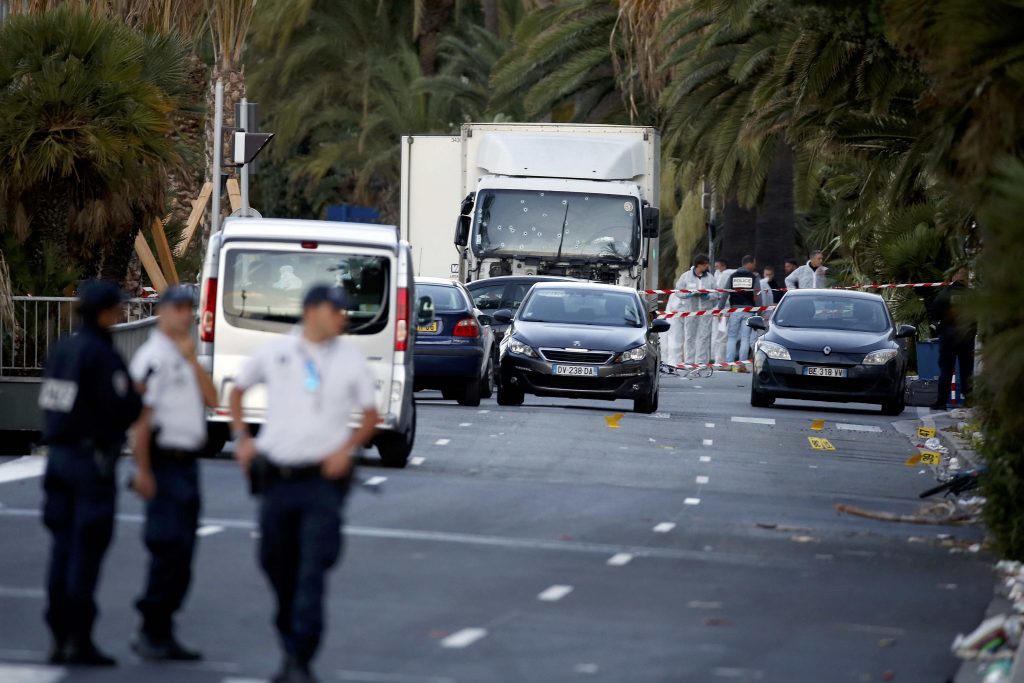 A terrorist at the wheel of a heavy truck plowed into a crowd celebrating Bastille Day in the French city of Nice on Thursday, killing at least 84 people and injuring scores more, along the famed seafront Promenade des Anglais, as a fireworks display ended just after 10:30 p.m.

On Friday afternoon, Francois Molins, the Paris prosecutor, said that 202 people were wounded, with 25 of them on life support amid the 52 in critical condition overall.

In a pre-dawn address to the nation Friday, President Francois Hollande said he was calling up military and police reservists to relieve forces worn out by an eight-month state of emergency begun after the Islamic State terror group killed 130 people in Paris. The state of emergency was extended by three months.

“France is filled with sadness by this new tragedy,” Hollande said, noting several children were among the dead in what he said he had no doubt was an act of terrorism.

He called the carnage, which came as France celebrated the anniversary of the 1789 revolutionary storming of the Bastille, an attack on liberty by fanatics who despised human rights. France would, nonetheless, continue military operations in Syria and Iraq.

Officials said hundreds were hurt as Bouhlel wove along the seafront, knocking them down “like skittles,” in a 25-ton, unmarked articulated truck.

Authorities said Bouhlel is a divorced father. His ex-wife is in police custody. He had been known to the police for common crimes but not to the intelligence services, the source said. His only prior conviction: road rage.

Police found one pistol and various fake weapons in the truck’s cabin. They later seized a telephone and computer at Bouhlel’s home.

“(The investigation) will try to determine whether he benefited from accomplices (and) it will also try to find out whether Mohamed Laouaiej Bouhlel had ties to Islamist terrorist organizations,” Francois Molins, the Paris prosecutor, told a news conference. “Although yesterday’s attack has not been claimed, this sort of thing fits in perfectly with calls for murder from such terrorist organizations.”

The truck careered for hundreds of yards along the front facing the Baie des Anges (Bay of Angels), slamming into families and friends listening to an orchestra or strolling above the beach towards the grand, century-old Hotel Negresco.

Nice-Matin posted photographs of the truck, its windshield starred by a score of bullets and its radiator grille destroyed.

Major events in France have been guarded by troops and armed police since the Islamic State attacks last year, but it appeared to have taken many minutes to halt the progress of the truck as it tore along pavements and a pedestrian zone.

Police told residents of the city, 20 miles from the Italian border, to stay indoors as they conducted further operations, although there was no sign of any other attack.

Hours earlier, Hollande had said the state of emergency would end in two weeks. He has now extended it by three months, calling up former troops and gendarmes after racing back to Paris from the south of France in the wake of the attack.

Vehicle attacks have been used by isolated members of terror groups in recent years, notably in Israel, as well as in Europe, though never to such devastating effect.

Nice, a city of some 350,000, has a history as a flamboyant, aristocratic resort but is also a gritty metropolis. It has seen dozens of its Muslim residents travel to Syria to fight, a path taken by previous Islamic State terrorists in Europe.

An injured individual is seen on the ground, and a medical helicopter in the background, after the attack Thursday in Nice, France. (Reuters/Eric Gaillard)

“Neither the place nor the date are coincidental,” a former French intelligence agent and security consultant, Claude Moniquet, told France-Info, noting the jihadist presence in Nice and the fact that July 14 marks France’s revolution.