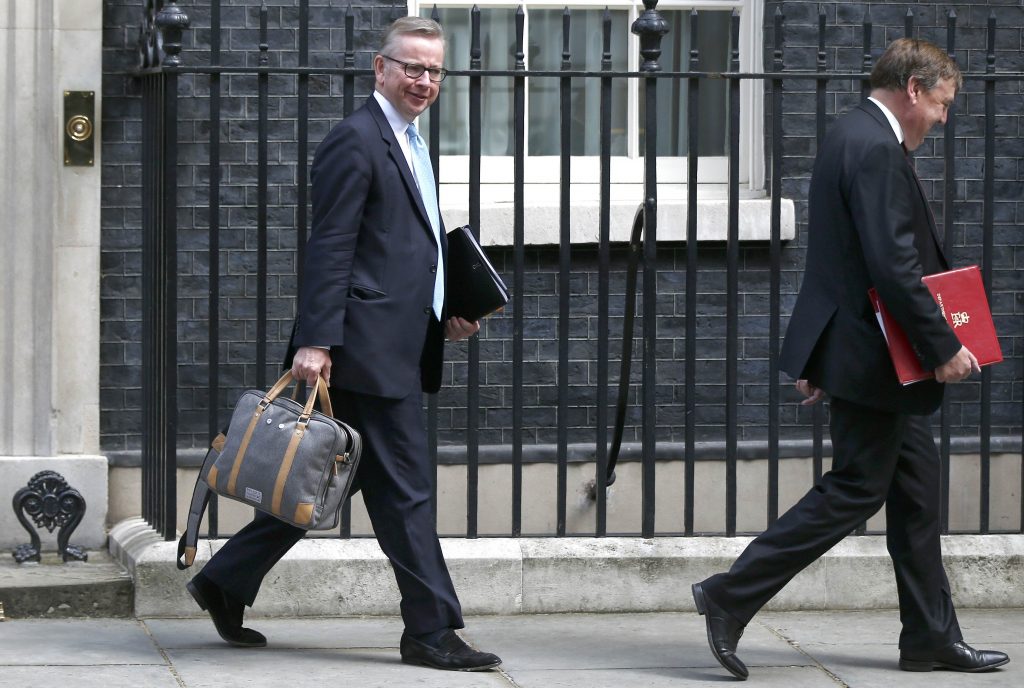 British Prime Minister Theresa May filled out her Cabinet posts Thursday, assembling a government that sweeps away many of her predecessor’s supporters and places strongly anti-EU figures in key international roles.

After filling half a dozen of the top jobs Wednesday — including surprise choice Boris Johnson as foreign secretary — May made new appointments Thursday, including Justice Secretary Liz Truss and Education Secretary Justine Greening.

Gove led the “leave” side in Britain’s EU referendum battle alongside former London Mayor Boris Johnson, then betrayed him by making a bid for Conservative leadership — a job Johnson had long sought.

May won the leadership battle and quickly sacked Gove, who is now seen as treacherous by many Conservatives. She rewarded Johnson with the plum job of foreign secretary.

He is a surprising choice to be Britain’s top diplomat. The former mayor of London is internationally famous — but for rumpled eccentricity and distinctly undiplomatic gaffes, rather than statesmanlike behavior.

In April Johnson suggested that President Barack Obama had an “ancestral dislike” of Britain because he is part Kenyan.

Johnson said he was “very excited” to be part of the government. Asked whom he would apologize to first, he said “the United States of America will be at the front of the queue.”

Lesser-known than Johnson but at least as important to Britain’s future is David Davis, the cumbersomely titled Secretary of State for Exiting the European Union. Davis, a veteran lawmaker who has twice run for the Conservative leadership, is one of the staunchest euroskeptics in British politics.

He is also a formidable battler, as May knows. For years the libertarian Davis has sparred with May over the powers of Britain’s spy agencies. He is currently suing the British government in the European courts against surveillance laws May introduced as home secretary.

Davis has previously said that Britain should take a “brisk but measured” approach to exit talks with the EU. He has said that Article 50 of the EU constitution — the formal trigger for two years of negotiations — should be invoked by the start of 2017.

Other EU leaders are already pressuring Britain to open formal talks — and warning that the U.K. cannot have access to the single European market without accepting free movement of EU citizens, a sticking point for many pro-Brexit Britons.

The foreign policy spokesman for German Chancellor Angela Merkel’s party in parliament said Thursday that many British suggestions on the country’s future relationship with the European Union are “unworkable.”

Juergen Hardt said that “free access to the common market means, among other things, accepting other fundamental freedoms such as the freedom of movement.”

New British Treasury chief Hammond tried to sound a reassuring note Thursday, pledging that he would not introduce an emergency national budget — even though there are question marks hanging over the economy following the country’s decision to leave the EU.

Hammond offered calming tones to the markets and the public in a series of interviews the morning after taking office.

“The number one challenge is to stabilize the economy, send signals of confidence about the future, the plans we have for the future, to the markets, to businesses, to international investors,” Hammond told Sky News. “Britain is open for business. We are not turning our back on the world.”

Hammond will meet with the head of the Bank of England, Mark Carney, on Thursday to “assess where we are.”

The comments came before the central bank’s Monetary Policy Committee voted not to cut interest rates in a bid to stimulate the economy. In a surprise move, it kept the bank’s benchmark interest rate at the current record low of 0.5 percent, where it has stood since the depths of the financial crisis in March 2009. It also decided against a new bout of quantitative easing, under which it effectively pumps money into the economy through the purchase of government bonds from financial institutions.

But the committee hinted it would loosen policy in August, when it will have fresh forecasts about the state of the British economy.

Carney has indicated that some sort of stimulus will be offered over the summer as his pre-vote warnings about the impact on the economy had begun to crystallize.

Hammond acknowledged that investment in Britain had been shaken since the referendum result.

“There has been a chilling effect,” he told the BBC. “We have seen an effect in markets, we have seen business investment decisions being paused because businesses now want to take stock, want to understand how we will take forward our renegotiation with the EU, what our aspirations are for the future trading relationship between Britain and the European Union.”