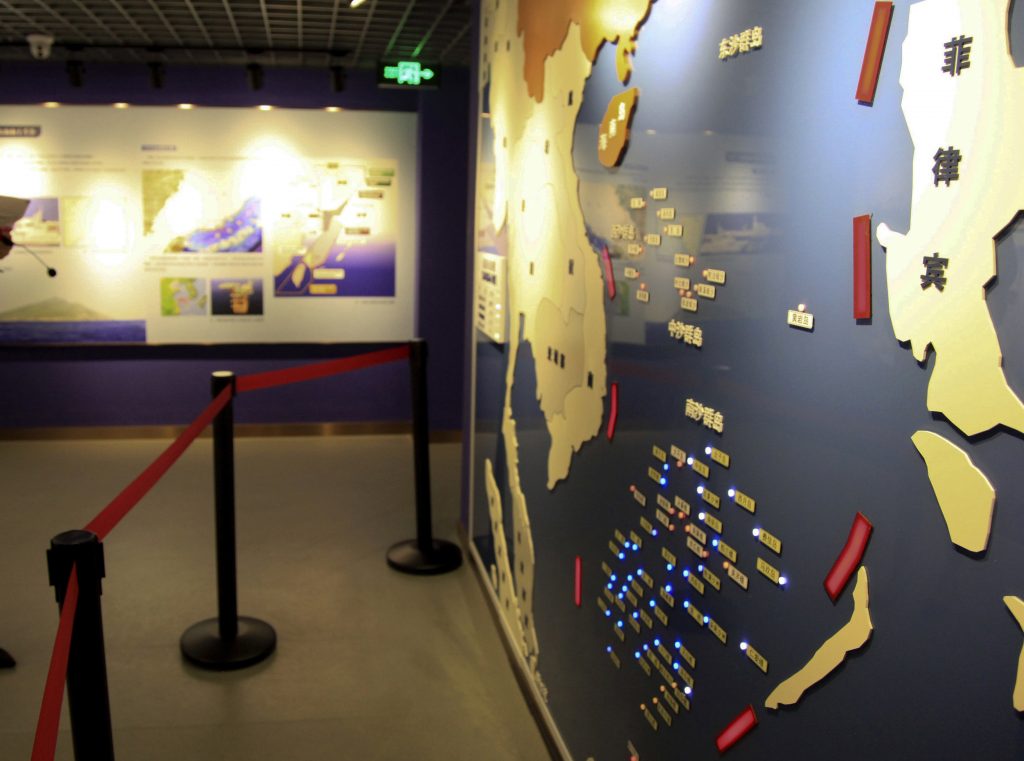 China warned other countries Wednesday against threatening its interests in the South China Sea while at the same time extending an olive branch to the new Philippine government, after an international tribunal handed Manila a victory by saying Beijing had no legal basis for its expansive claims there.

Chinese Vice Foreign Minister Liu Zhenmin said Beijing could declare an air defense identification zone over the waters if it felt threatened, a move that would sharply escalate tensions.

The Philippines, under a U.N. treaty governing the seas, sought arbitration from an international tribunal on several issues related to its long-running territorial disputes with China.

The tribunal in The Hague, Netherlands, rejected China’s claims in a landmark ruling that also found the country had aggravated the seething regional dispute and violated the Philippines’ maritime rights by building up artificial islands that destroyed coral reefs and by disrupting fishing and oil exploration.

While introducing a policy paper in response to the ruling, Liu said the islands in the South China Sea were China’s “inherent territory” and blamed the Philippines for stirring up trouble.

“If our security is being threatened, of course we have the right to demarcate a zone. This would depend on our overall assessment,” Liu said in a briefing. “We hope that other countries will not take this opportunity to threaten China and work with China to protect the peace and stability of the South China Sea, and not let it become the origin of a war.”

In 2013, China set up an air defense identification zone over disputed islands in the East China Sea, requiring all aircraft entering the area to notify Chinese authorities or be subjected to “emergency military measures” if they disobey orders from Beijing. The U.S. and others refuse to recognize the zone.

While blaming the previous Philippine government for complicating the dispute by seeking arbitration, Liu also sought to strike a conciliatory note with the Southeast Asian nation’s new leadership. Liu said China remains committed to negotiations with the Philippines and noting new Philippine President Rodrigo Duterte’s positive remarks on the issue.

“After the storm of this arbitration has passed, and the sky has cleared, we hope this day (of negotiations) will come quickly, but whether it can come, we still have to wait,” Liu said, adding that China believed that cooperation would also bring Filipinos “tangible benefits.”

He said, however, that China hoped the new government would not use the arbitration results — which China has declared null and void — as a basis for negotiations. China believes cooperation with other South China Sea neighbors, whether in fishing or in exploiting oil and gas resources in the waters, could be achieved by negotiations, he said.

Duterte has not directly responded to China’s overtures since the ruling was issued Tuesday. China has been on a charm offensive and Duterte is navigating a tightrope in which he wants to revive relations with Beijing while being seen as defending the major victory the country has won through arbitration.

Although the decision is seen as a major legal declaration regarding one of the world’s most contested regions, its impact is uncertain given the tribunal has no power of enforcement.

While the findings cannot reverse China’s actions, they still constitute a rebuke, carrying with it the force of the international community’s opinion. It also gives heart to small countries in Asia that have helplessly chafed at China’s expansionism, backed by its military and economic power.

“The Philippines strongly affirms its respect for this milestone decision as an important contribution to ongoing efforts in addressing disputes in the South China Sea,” Philippine Foreign Secretary Perfecto Yasay said Tuesday, calling on “all those concerned to exercise restraint and sobriety.”

Former Philippine President Benigno Aquino III, who brought the case against China in 2013, said the decision brought clarity to the disputes that “now establishes better conditions that enable countries to engage each other, bearing in mind their duties and rights within a context that espouses equality and amity.”

Cooperation, however, would remain elusive if conflicts over claims persist, he said.

Six regional governments have overlapping claims in the South China Sea, waters that are rich in fishing stocks and potential energy resources and where an estimated $5 trillion in global trade passes each year.

The disputes have increased friction between China and the United States, which has ramped up its military presence in the region as China has expanded its navy’s reach farther offshore.

White House spokesman Josh Earnest encouraged all parties to “acknowledge the final and binding nature of this tribunal.” Speaking to reporters aboard Air Force One as President Barack Obama was flying to Dallas, Earnest said the United States seeks a peaceful resolution to disputes and competing claims in the region, while preserving freedom of navigation and commerce.

Earnest also urged the parties not to use the ruling as an opportunity to engage in escalatory or provocative actions.

The five-member panel from the Permanent Court of Arbitration unanimously concluded China had violated its obligations to refrain from aggravating the dispute while the settlement process was ongoing.

It also found that China had interfered with Philippine petroleum exploration at Reed Bank, tried to stop fishing by Philippine vessels and failed to prevent Chinese fishermen from the Philippines’ 200-nautical mile exclusive economic zone.

China, which boycotted the entire proceedings, reiterated that it did not accept the panel’s jurisdiction. China “solemnly declares that the award is null and void and has no binding force. China neither accepts nor recognizes it,” the Foreign Ministry said.

Beijing says vast areas of the South China Sea have been Chinese territory since ancient times and demarcated its modern claims with the so-called nine-dash line, a map that was submitted under the U.N. treaty. The tribunal said that any historical resource rights China may have had were wiped out if they are incompatible with exclusive economic zones established under the U.N. treaty, which both countries have signed.

It also criticized China for building a large artificial island on Mischief Reef, saying it caused “permanent irreparable harm” to the coral reef ecosystem and permanently destroyed evidence of the natural conditions of the feature.