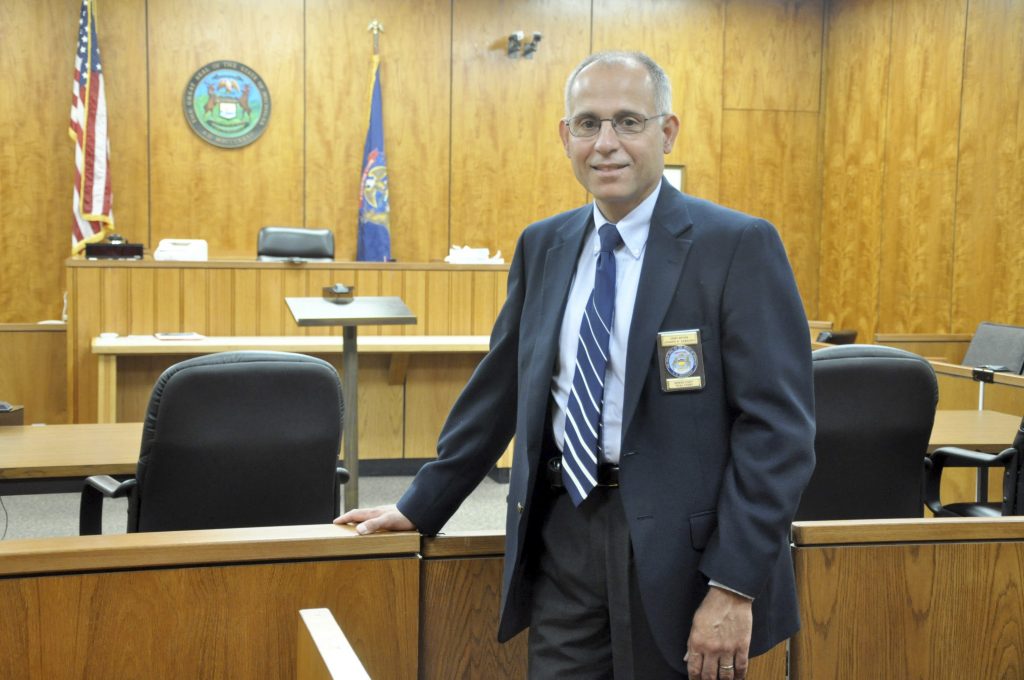 A Michigan sheriff pledged Tuesday to review his department’s guidelines for transporting suspects charged with violent crimes after an inmate who was cuffed in front rather than behind his back wrested a gun from a deputy and killed two court bailiffs.

Berrien County Sheriff Paul Bailey initially told reporters that Larry Darnell Gordon wasn’t handcuffed at all Monday during the brazen courthouse escape attempt. On Tuesday, Bailey revised that account, explaining Gordon was handcuffed in front but that the restraint was not attached to a belly chain, which security experts say is a safer way to restrict movement.

“We’re going to look at everything about why this happened and make sure that if there are things we can change so this never happens again, we will,” Bailey said. “We’ll be working with our chief judge about our protocols at the courthouse.”

Gary Klugiewicz, an inmate transport expert with security consultant Vistelar in Wisconsin, and a retired Milwaukee County sheriff’s captain, said the lack of a transport belt could have played a major role in the fatal shootings.

“Somebody handcuffed in front is totally able to do just about anything if they’re not restrained to any type of belt,” he said.

Gordon was being moved from a holding cell in an area of the courthouse not open to the public when he disarmed Deputy James Atterberry Jr. during a fight and shot him. He then moved into a public hallway in the courthouse and killed bailiffs Joseph Zangaro, 61, and Ronald Kienzle, 63, both retired police officers, Bailey said.

The detainee also shot a woman in the arm and briefly took hostages before being fatally shot by other bailiffs.

“Those bailiffs were heroes along with all the other officers,” Bailey said. “They ran to where shots were being fired. This could have been a lot worse without them being so brave to go into the gunfire and take this person down.”

Nathan Hall, a consultant with the National Center for State Courts, which advises court officials on security, said it’s best if two deputies transport an inmate. One — armed with a stun gun or baton, but not a firearm — would escort the defendant directly. The second deputy, armed with a gun, would trail at a safe distance.

“That best practice is tailored specifically to the potential for a firearm to be used against that transporting officer,” Hall said. “These are best practices. The reality is that that can be expensive. We understand that. However, these instances happen.”

Hall said his group also recommends handcuffing from behind.

Klugiewicz said many factors are considered when deciding how to transport an inmate such as whether the charges are violent offenses, the defendant has been violent in jail and if the court appearance is a sentencing.

“He’s not been combative. He’s always been cooperative the entire time he was here,” Bailey said of Gordon’s time in jail while charges were pending.

Gordon was charged in April with kidnapping, assault with a dangerous weapon and criminal conduct, according to state police records. No other details were immediately available Tuesday.

Gordon was discharged from probation in 2014 after being sentenced for stealing fireworks from a temporary stand, said Michigan Department of Corrections spokesman Chris Gautz. He served time in state prison from 1999 to 2002 for fleeing and eluding police.

Roe said the investigation began April 20, when officers went to arrest Gordon. He fled and was later caught with the help of a Michigan State Police dog, the chief said.

“It’s unfortunate it ended the way it did,” Roe said. “We can’t prove these allegations true in court.”

Zangaro, one of the bailiffs killed, was head of court security. He retired from the Michigan State Police as commander of the Bridgman Post. Kienzle retired as a sergeant in the Benton Township police department after serving in the U.S. Army.

In 2011, Zangaro told The Herald-Palladium newspaper that security staff had a “ton of experience,” more than many police departments.

“Probably 90 percent of the people who are here don’t want to be,” he said of people with business in the courthouse. “They have either a criminal issue, a civil issue or a family issue, and those become very emotionally charged sometimes.”

The courthouse was closed Tuesday but was expected to reopen Wednesday.

Experts said attention on courthouse security has intensified since 2005, when Brian Nichols overpowered a deputy escorting him to court for his trial, took her gun and fatally shot the presiding judge and court reporter and then killed a sheriff’s deputy outside the building. He stole a car and drove to an affluent Atlanta neighborhood, where he shot and killed an off-duty federal agent.