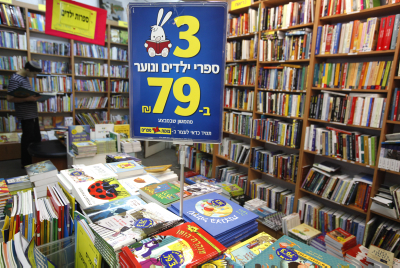 A wave of store closures at the First Train Station in Tel Aviv has remaining tenants wondering if they made the right choice in opening at the site when it began operating in 2010. The latest store to close – the third in the past 6 months – was a large branch of the Tzomet Sfarim bookseller chain, which claimed that business was not doing well at the site.

Similar in concept to the Yerushalayim First Station, the Tel Aviv version is located on the site of a train station that had been operating in prestate days. Built around the train station concept is a leisure area, consisting of shops and restaurants, where events and fairs are held.

Unlike the Yerushalayim version, the Tel Aviv station is located away from the center of the city, along the shore. It was hoped that the site would serve to revitalize business in the area, but that has not panned out.

According to storeowners, one of the reasons for the failure of the site is the poor mix of shops that were chosen to open there. “There are no good coffee shops or restaurants there, these are usually the places that are anchors for leisure sites like these,” one storeowner told Globes. “There are also a lot of empty spots here. We tried to offer the management some good ideas that would bring in a more affluent crowd, instead of the people we get now who don’t spend money, but to no avail.”

Another merchant told the newspaper that there was no traffic. “This site is not attracting people. There are many competing ‘concept’ leisure areas, many of them located on more advantageous areas. There is little to attract people to come down here. At first we were doing okay, but now we are barely breaking even.”

The site’s management, commenting on the closures, said that it did not mean that the site was not successful. “In the course of business stores open and close,” management said in a statement. Tzomet Sfarim did not comment on the closure.