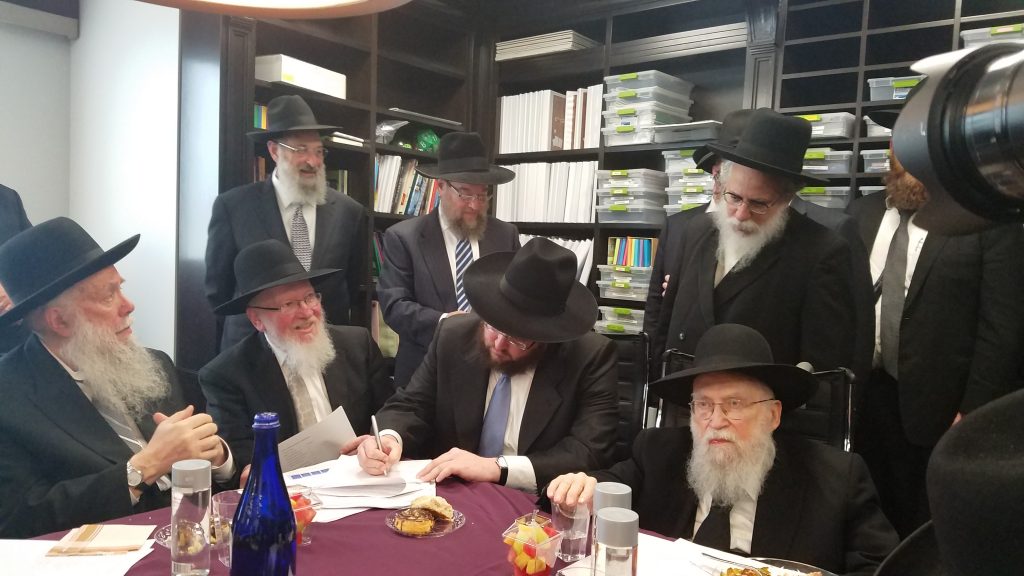 A pioneering initiative that would dramatically raise the salaries of approximately three thousand rebbeim in the United States took a major step forward on Tuesday with the deposit of the first $7M into a fund that will subsidize the increases.

The fund is projected to eventually reach its goal of $66 million. Fifteen yeshivos have already signed up for “The Rebbi Initiative,” which aims to give rebbis in the United States a raise of $15,000 per year in a staggered program over six or seven years. The enterprise, which will match donors’ gifts with funds from participating yeshivos, has the potential to change the face of chinuch habanim in America. It is the result of a partnership of Torah Umesorah and Agudath Israel of America, led by Rabbi Shmuel Bloom, a past executive vice president of Agudah.

Its declared goals are also to raise the stature of the rebbi, both through their extra income and through a massive campaign planned for the near future.

“The profession of a rebbi will become both more respected and more financially secure,” a letter to yeshivos that went out last week declared, “which will retain and encourage talent into the field.”

The seeds of the initiative began in November of last year, when Harav David Ozeri passionately pointed out at an Agudah convention that rebbeim are not paid or respected enough.

In a widely publicized speech, Rabbi Ozeri, the Rav of the Yad Yosef Torah Center on Ocean Parkway, in Brooklyn, praised the community for the chessed for which it is known.

“However,” he charged, “There is one area where we, as a klal, are lacking in our obligation of dei machsero asher yechsar lo — providing a person that which he lacks. Where is it? Is it bikkur cholim? No. Is it hachnasat orchim? No. Kiruv? No. Hachnasat kallah? No. Feeding the hungry? No. What is it?

“Our melamdim,” he declared. “Your children’s rebbi, your grandchild’s rebbi. Are we providing for what they are lacking? Your child’s rebbi is a gifted tzaddik who has forfeited most pleasures of this world to teach your child Torah. A brilliant mind sacrificing to live on a minimal salary. He is working in the most lofty field which the universe has to offer.”

The speech made an impact on tens of thousands of people. At the leadership halls of Torah Umesorah, Rav Ozeri was asked to flesh out his proposals at their Presidents Conference in January.

A group of baalei batim met after the conference. Linking up with Agudah, the meeting yielded pledges for the $66 million they estimated was needed to get the project off the ground.

The specific goals behind “The Rebbi Initiative” are simple: Encourage yeshivos to raise their rebbeim’s salaries over six or seven years.

The fund will initially sponsor half the increase, with the yeshivah gradually assuming more of the financial responsibility.

There are two options:

When the fund reaches its full goal of $66 million, it will be covering raises for 3,000 rebbeim.

In an interview with Hamodia, Rabbi Bloom said that he expects that not all yeshivos will join, but the pressure of some yeshivos offering higher wages will allow the initiative to change the living conditions of rebbeim even more substantially than the actual funds distributed.

“They felt that if we give these 3,000 rebbeim a raise,” Rabbi Bloom said, “the market will raise the rest.”

The fund’s targets are rebbeim from pre-1A through 12th grade. However, yeshivos have an option of including beis medrash maggidei shiur, mashgichim, a shoel umeishiv or a specialty rebbi in the contract with Torah Umesorah.

At an event in Lakewood last week, the first 15 yeshivos from a cross-section of the Torah world signed on to the plan in the presence of Torah Umesorah’s Vaad Roshei Yeshivah, shlita, which include Harav Avraham Chaim Levin, Harav Aharon Feldman, the Novominsker Rebbe, Harav Malkiel Kotler, Harav Elya Brudny, Harav Shmuel Kaminetsky and Harav Hillel David.

Earlier this year the Mesivta of Long Beach, now a participant in the new initiative, set up a special fund for their 15 rebbeim, which was advertised in the Jewish media, to raise their rebbeim’s salary by $20,000.

Rabbi Bloom sought to address several concerns of both yeshivos interested in participating and of their parent bodies.

Yeshivos are wondering how they will manage to increase their budgets so suddenly. For a large yeshivah, this plan can add $1 million a year to operating expenses. Some yeshivos also worry that if there is a downturn in the economy and their donor base dries up, they may have to reduce salaries they had previously raised.

And parents may ask, will it lead to a tuition hike? For many yeshivah parents, tuition payments are their largest monthly expense.

For one, Rabbi Bloom emphasizes, the initiative is planning an advertising campaign in the Jewish media to encourage donors across the country to increase their donations to mosdos in their areas. The operation will focus on the prestige of the rebbi’s job and how central chinuch is to the future of the Jewish people.

“They should understand that a rebbi is not like a butcher or a tailor,” Rabbi Bloom said, “and that even after the raise they will not be getting that great a salary.”

Additionally, the fund has put together a kit to help yeshivos with fundraising.

Rabbi Dovid Nojowitz, national director of Torah Umesorah, says that there is no need for tuition rates to rise, although he admits he cannot predict how the economy will be years from now.

“It should not have to cost an increase in tuition,” Rabbi Nojowitz told Hamodia. “On the overall budget of the yeshivos it shouldn’t be more than a 5 percent increase. What we do not want is that it should come on the backs of the parents, through a raise in tuition.”

There is some precedent to back up his assertion. The last significant raise rebbeim received came about 30 years ago, when Mesivta Chaim Berlin unilaterally raised salaries from an average of $15,000 to $18,000 to a year to close to $30,000. The increase by Rabbi Fruchthandler, who is a member of the presidium of Torah Umesorah, was introduced gradually over a few years.

Rabbi Fruchthandler’s feat was eventually replicated by the vast majority of American yeshivos. Asked if the raise led to a tuition-rate hike, he said, “Nothing related to the size of the increase.”

The fund is firm that they are only accepting applications if the money is available. They agreed to go public with it Tuesday only after the initial $7 million was actually deposited in the bank.

“Every yeshivah that signs on will know that the money is there for them already,” Rabbi Bloom emphasized. “This is something that serious people are discussing seriously.”

Rabbi Bloom considers this initiative the answer to one of Klal Yisrael’s most pressing problems. While there are still many kinks to be worked through, the siyatta diShmaya it will have will lead it across the finish line, he says.

“One menahel told me, ‘Two years ago I was $1.5 million in debt. Now, baruch Hashem, through miracles I am out of debt.’ So who says these raises won’t be the miracles for the next five years?’”