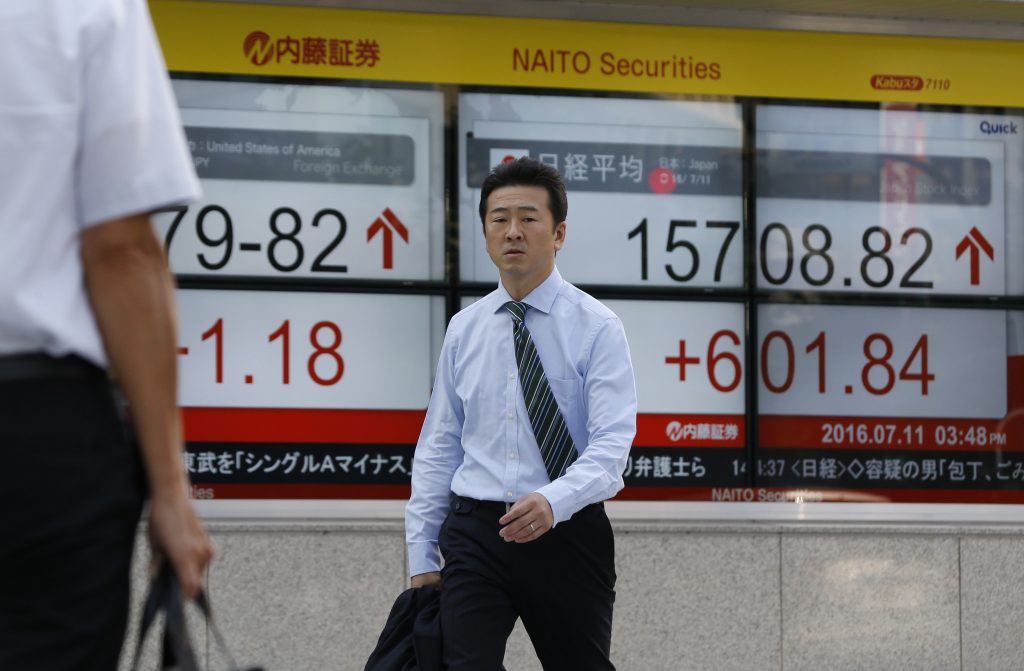 Asian stocks rose to a 2½-month peak on Tuesday, a day after Wall Street shares hit a record high thanks to a combination of upbeat U.S. data and expectations of more stimulus from global policymakers.

Japan’s Nikkei jumped 3.0 percent as investors bet the country’s government may inject $100 billion in fiscal spending to boost the economy, possibly financed by the central bank’s money-printing, a policy mix that is often dubbed “helicopter money.”

On Wall Street, the S&P 500 index on Monday broke a new record high, its first in more than a year, extending its gain after Friday’s bumper job figures reduced worries about slowdown in employment.

Supporting risk assets are globally low interest rates as a result of central bank stimulus in Japan and Europe.

The U.S. 10-year bond yield fell to as low as 1.321 percent earlier this month and last stood at 1.435 percent, way below U.S. core consumer price inflation above two percent.

The rally was in part driven by investors buying high-dividend and defensive shares, seeking refuge from low or negative interest rates in Europe and Japan.

Indeed, defensive stocks were the best performing S&P 500 sector since the previous record: utilities, telecoms and consumer staples, all with double-digit percentage gains.

“The rally is supported not so much by economic fundamentals as liquidity. The rally is likely to prove unsustainable and short-lived,” said Daisuke Uno, chief strategist at Sumitomo Mitsui Bank.

Fanning the latest rally in share prices, Japanese Prime Minister Shinzo Abe called for a fresh round of fiscal stimulus after a victory for his ruling coalition. While Abe did not give details on the size of the package, it is widely expected to reach 10 trillion yen ($97.5 billion).

A visit by former Federal Reserve Chairman Ben Bernanke to the Bank of Japan on Monday fuelled talk that BOJ Governor Haruhiko Kuroda might decide to provide “helicopter money” – a term coined by economist Milton Friedman and cited by Bernanke, before he became Fed chairman, as a way to finance government budgets and fight deflation.

Against this backdrop, the dollar rose 2.2 percent against the yen to 102.68 on Monday, marking its biggest daily gain since October 2014.

In Asian morning trade, the dollar changed hands at 103.00 yen, up about 0.2 percent from late U.S. levels.

The British pound gained 0.7 percent to $1.3080 as weeks of political turmoil appeared to ease on news that Interior Minister Theresa May has cleared the path to become Britain’s prime minister on Wednesday.

Still, market players say huge uncertainty remains, including May’s approach to negotiating Britain’s exit from the European Union and on whether she will call a general election to cement her authority.

Some traders also expect the Bank of England to cut rates this week to fend off pressure on the U.K. economy following the Brexit vote. A rate cut could undermine the sterling’s dwindling yield attraction among major currencies and push it further, possibly below its 31-year low just under $1.28 hit on July 6.

Low rates in the developed world as well as concerns about the fallout from Brexit in Europe are encouraging investment in emerging markets.

MSCI’s emerging market index is 1.4 percent above its levels from just before the U.K. referendum, slightly outperforming U.S. shares.

Oil markets failed to catch a bid on the broad improvement in risk sentiment, however, with their prices falling more than 1 percent to two-month lows on Monday.

Their recovery early this year has stalled on a barrage of factors including disappointing drawdowns in U.S. crude and gasoline, rising U.S. oil drilling rig count and cuts in bullish hedge fund bets on crude to four-month lows.