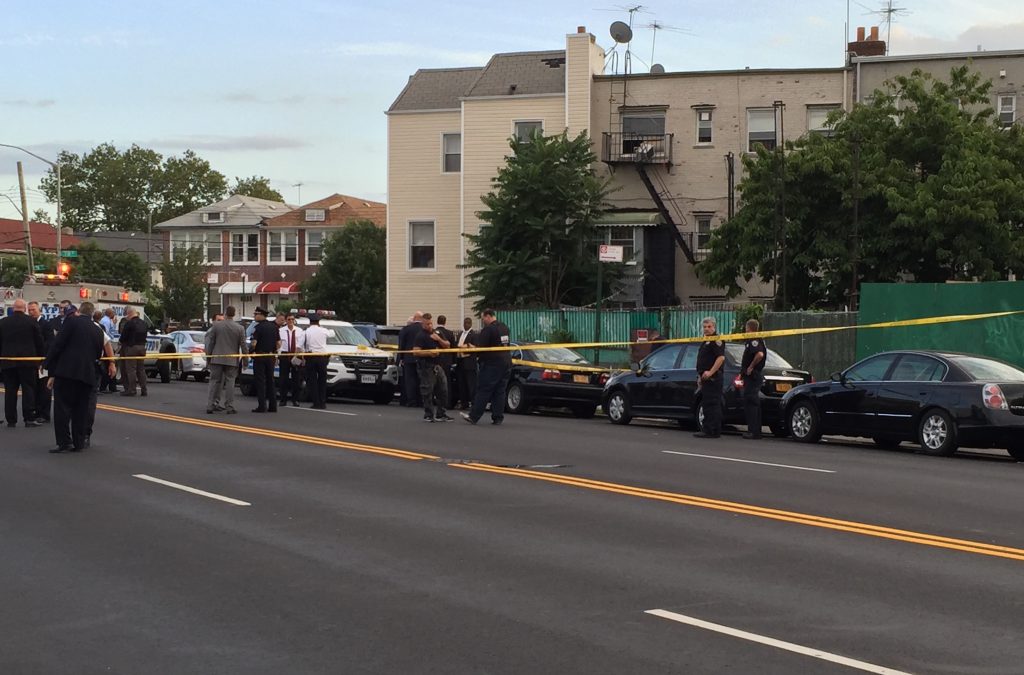 Two NYPD officers shot and killed a burglary suspect who pointed a gun at them in the Bensonhurst neighborhood of Brooklyn on Monday evening. Another burglary suspect is still on the loose.

The incident occurred at 6:30 p.m., when officers from the New York Police Department’s 62nd Precinct responded to reports of a burglary at a home on the corner of 78th Street and Stillwell Avenue, said James P. O’Neill, Chief of Department of the NYPD, at a press conference Monday night.

The responding officers saw a suspect fleeing up to the third floor of the three-story home, and alerted backup units. On the third floor, the suspect pushed an air conditioner out a back window, fled down a fire escape, and scaled a fence behind the home, on Stillwell Avenue.

The suspect then “was confronted by a uniformed sergeant,” said O’Neill. “The suspect pointed a revolver at the sergeant. Both the sergeant and another uniformed police officer discharged their service weapons.”

Each officer fired one shot at close range; both shots hit the suspect, and he was taken to Coney Island Hospital, where he was pronounced dead.

The perpetrator’s gun was recovered at the scene.

Neither the police officers, nor any of the eight people – seven adults and an infant – in the home at the time of the robbery, were hurt.

O’Neill described the deceased as a 39-year-old black male; police are withholding his name, pending notification to his family.

Police are looking for another man, who was also involved in the burglary and managed to flee. O’Neill described him as a black male in his 30’s, heavyset and wearing a yellow construction hat.

Police roped off an entire square block between Stillwell Avenue and Bay Parkway, from 78th Street to Kings Highway, as they processed the crime scene. Dozens of police officers, officials and emergency vehicles were on the scene.

The incident also attracted a large spectator and media presence, as people across the U.S. are on edge due to the recent fatal police shootings of black men in Louisiana and Minnesota, Black Lives Matter protests across the country, and the murder of five police officers by a black man at a protest in Dallas.

Bensonhurst residents expressed surprise that this incident happened in their usually peaceful neighborhood, but seemed to breathe a sigh of relief upon hearing that it was a “mere” burglary, unrelated to the national unrest.

“I was shocked to hear that this happened here,” said Deborah Gottstein, a spectator at the crime scene, just two blocks from her home. “Bensonhurst is a wonderful, friendly and safe environment, but I guess this shows that anything can happen anywhere.”