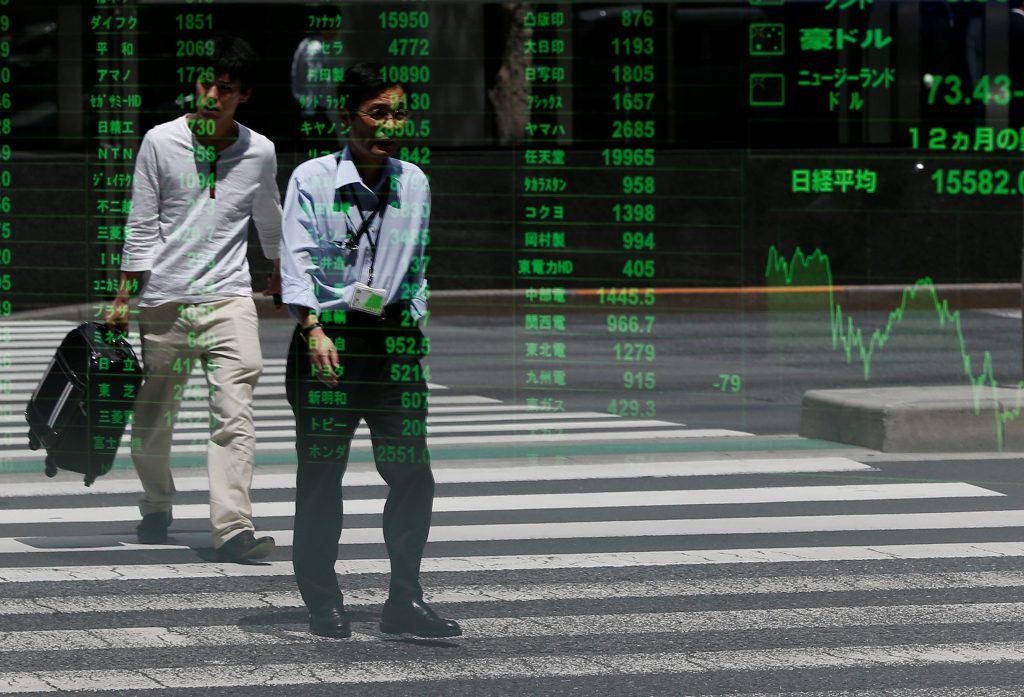 Stocks in Germany were seen starting 0.9 percent higher, with the CAC up 0.7 pct and the FTSE 0.5 percent. EMINI futures for the S&P 500 came within a point of their all-time top.

The Asian rebound came after news that the U.S. economy added 287,000 jobs last month, well above median forecasts and recovering from a very weak May report.

In the end, investors concluded the data was not strong enough to revive the prospect of a rate hike from the Federal Reserve for the next few months, benefiting bonds and stocks.

The Dow gained 1.4 percent, while the S&P 500 firmed 1.53 percent and the Nasdaq 1.64 percent. The rise set the seal on an eight-session run that has seen U.S. equities add $1.4 trillion to market capitalization.   Several Fed officials are scheduled to speak this week, offering plenty of opportunities for the market to glean clues about policy.

The Bank of England meets on Thursday and might well cut its 0.5 percent interest rate to offset the economic drag from Britain’s vote to leave the European Union. Governor Mark Carney has already opened the door to easing, including the expansion of its 375 billion-pound bond-buying program.

The only question was timing, with analysts in a Reuters poll divided on whether a cut would come this week or in August.

Various reports out Monday argued for urgent action, with consumer spending falling last month, the business outlook darkening by the most in four years, and economic activity in London slowing sharply.

“The outcome of the U.K. referendum has dealt a significant shock to the outlook for the global economy,” warned Christian Keller, an economist at Barclays.

“It introduced a higher uncertainty about Europe’s future, and raised questions about globalization more generally,” he added. “Confidence and financial channels could potentially propagate the effects to the U.S., China and beyond.”

That was one factor behind the relentless demand for sovereign debt that has driven down yields, which move inversely to prices, and kept the pound at its weakest since 1985.

Sterling was stuck at $1.2963 on Monday, having failed utterly to rebound from the 13 percent loss suffered in the immediate wake of Brexit.

In commodity markets, spot gold was steady around $1,364.80 per ounce.

Crude prices edged down to near two-month lows on seasonally weak consumption, despite comments from Saudi Arabia’s oil minister that the oil market was becoming more balanced.