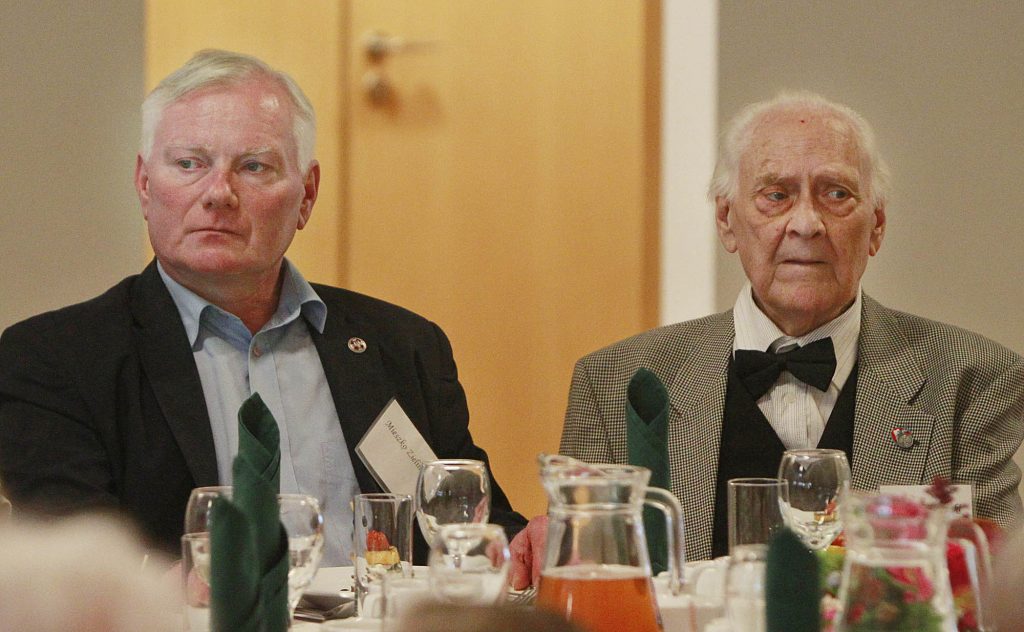 One man is 101 years old. Others are in their 80s and 90s and arrived in wheelchairs, with a walker, or leaning for support on children who are themselves past middle age.

A group of Polish Christians who risked their own lives to help Jews during the Holocaust were brought together Sunday to be honored by a New York City-based Jewish organization that provides financial aid to these rescuers — an attempt to give back something to people who gave the gift of life to thousands of Jews in Europe’s darkest days.

“Words are truly inadequate to express the gratitude of the Jewish people to each and every one of you,” Stanlee Stahl, executive vice president of the Jewish Foundation for the Righteous, said to 35 rescuers.

In a short speech, Stahl called them “the precious few who chose not to be bystanders.”

The organization was founded in 1986 by a rabbi who wanted to fulfil a traditional Jewish commitment of seeking out and recognizing goodness, called “hakaras hatov” in Hebrew. The foundation’s main role is to supplement state pensions and provide rescuers with medication, hearing aids or other medical support that they might not otherwise have in a nation where state pensions and medical services remain meager.

In Poland, the rescuers now receive about $3,000 a year per person, which includes a special bonus at holiday for food and heating. The amount varies, depending on how much the foundation can raise from donors, who are mostly American Jews.

The luncheon on Sunday, which has become a yearly event, is an addition to that financial help — a way to show their gratitude in person. It was also attended by the ambassadors of the United States and Israel.

The rescuers, arriving in their Sunday best, expressed satisfaction that their deeds, and those of their families, live on in memory. Most of the surviving rescuers were teenagers or young adults at the time, who collaborated with their parents to hide and feed Jews being hunted by the German in their occupied homeland. The penalty for helping Jews was death, and some helpers were caught and executed.

“This help is very important to us, because our retirement payments are truly tiny,” said Alicja Szczepaniak-Schnepf, an 85-year-old who helped her mother shelter Jews in their Warsaw apartment. “But beyond that, this is a recognition that we are being remembered and honored.”

One rescuer gave Stahl white and red carnations, Poland’s national colors; another person presented Stahl with a book of his poetry.

Yad Vashem, Israel’s Holocaust memorial, has officially recognized 6,620 Poles as “Righteous Among the Nations.” It is more than from any other country that was under the Nazi occupation, a reflection of Poland having been home to the largest community of Jews in Europe before the Holocaust, numbering nearly 3.5 million.

The Foundation for the Righteous sends financial help to 450 rescuers worldwide in 20 countries, 238 of them in Poland. That is a sharp drop from some 15 years ago, when 1,850 people in 34 countries were supported.

More than 70 years after the war, Israeli Ambassador Anna Azari said that evidence continues to be uncovered of Poles who saved Jews and that a “holy mission” of the embassy in Poland is to bestow the “Righteous” honor, though most are now bestowed posthumously.

On the other moral extreme were cases of Poles murdering Jews during the German occupation, and one of the most shocking atrocities cases was also being remembered on Sunday in the northern Polish village of Jedwabne. There, 95 miles north of Warsaw, Poland’s Chief Rabbi Michael Schudrich led prayers on the site where hundreds of Jews were locked in a barn and burned alive.