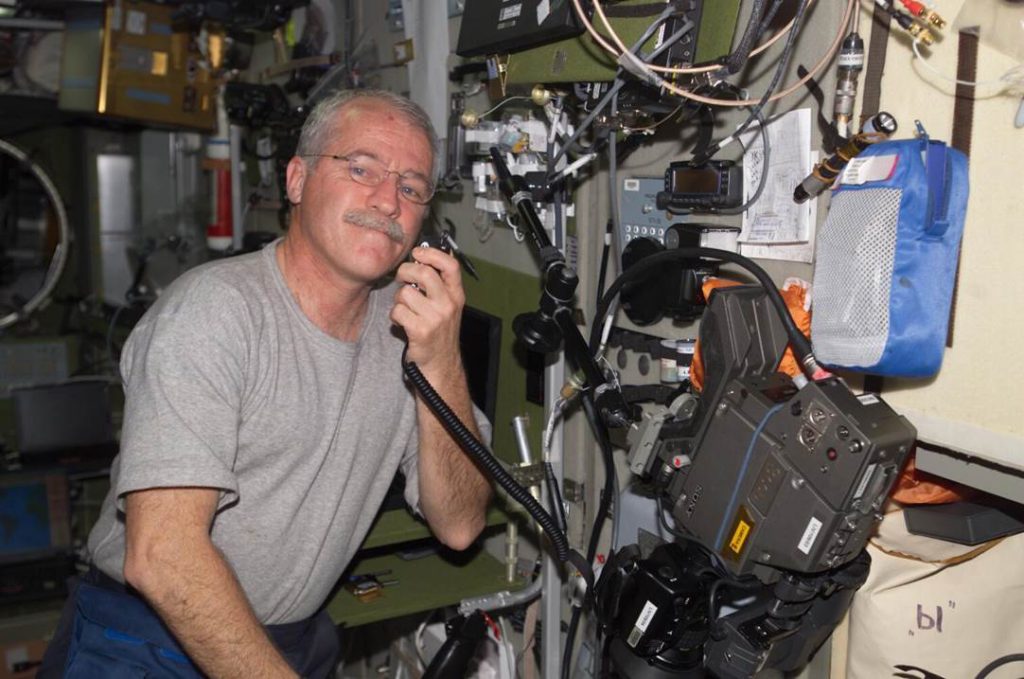 In 2005, astronaut John Phillips took a break from his work on the International Space Station and looked out the window at Earth. He was about halfway through a mission that had begun in April and would end in October.

When he gazed down at the planet, the Earth was blurry. He couldn’t focus on it clearly. That was strange-he’d always had 20/20 vision. He wondered: was his eyesight getting worse?

“I’m not sure if I reported that to the ground,” he said. “I think I didn’t. I thought it would be something that would just go away, and fix itself when I got to Earth.”

It didn’t go away.

During Phillips’ post-flight physical, NASA found that his vision had gone from 20/20 to 20/100 in six months.

Rigorous testing followed. Phillips got MRIs, retinal scans, neurological tests, and a lumbar puncture. The tests showed that not only had his vision changed, but his eyes had changed as well.

The back of his eye had gotten flatter, pushing his retina forward. He had choroidal folds, which are like stretch marks on the back of the eye. His optic nerve was inflamed.

Phillips became the first widely recognized case of a mysterious syndrome that affects 80 percent of astronauts on long-duration missions in space. The syndrome could interfere with plans for future crewed space missions, including any trips to Mars.

Visual Impairment Intracranial Pressure syndrome (VIIP) is named for the leading theory to explain the syndrome. On Earth, gravity pulls bodily fluids down toward the feet. That doesn’t happen in space, and it’s thought that extra fluid in the skull increases pressure on the brain and the back of the eye.

At first, NASA thought that Phillips was an isolated case. But then researchers found evidence of VIIP in other astronauts. VIIP has now been recognized as a widespread problem, and there has been a struggle not only to understand its cause, but to study it at all.

The theory that fluid builds up in the skull during space flight hasn’t actually been tested. The only proven methods of measuring intracranial pressure are invasive: a lumbar puncture or drilling a hole into the skull.

“There’s the risk for infection and just doing the procedure, quite frankly, in space is difficult,” said J.D. Polk, a senior flight surgeon at NASA. “Having to anchor somebody and do a spinal tap in space is not something we would relish.”

Here on Earth, the most similar condition is idiopathic intracranial hypertension (IIH). Patients with this condition also have increased pressure in their heads, and they experience visual changes like the astronauts.’ Another condition, papilledema, involves optic nerve swelling.

But they’re not perfect models for the astronauts’ disorder. IIH is idiopathic, which means no one knows what causes it. It comes with a deluge of other symptoms, like nausea, dizziness, and severe headache, that astronauts with VIIP don’t experience. And the medication for papilledema doesn’t work on astronauts with VIIP.

Karina Marshall-Goebel at the Institute of Aerospace Medicine in Germany is trying to study VIIP using a head-down tilt test. Participants’ entire bodies are tilted slightly to simulate the fluid shift in space, but she said it’s not ideal. The study is still affected by gravity, and they can’t keep people tilted for as long as astronauts live in space.

“It’s a unique environment, you can’t replicate it without going into space,” she said. “And you always have to keep that in the back of your head.”

Other researchers are searching for less invasive ways to assess brain health on Earth and potentially in space. Eric Bershad, an intensive care neurologist at the Baylor College of Medicine, is working on a way to measure brain pressure using ultrasound of an eye artery.

Other devices currently being developed use sound waves and radio waves to try and measure the brain through its different access points: the skull, ears and eyes. There’s one that estimates brain pressure by pushing on an anesthetized eye until a vein flattens, like stepping on a gardening hose.

“So far, none of the non-invasive technologies are accurate enough to replace the invasive measurement, but I think within the next few years there is a good chance there will be,” Bershad said.

Ross Ethier, a biomedical engineer at Georgia Tech, is using models to simulate what happens in the body when intracranial pressure goes up. He’s looking at a potential mechanical solution: a device that could draw fluid back down to the legs in space. It would likely be clunky and uncomfortable, so he’d need to know how long a person would have to wear it — two hours a day? Three?

“Right now, there’s a million things you could measure, and you kind of don’t even know where to start,” Ethier said.

Barratt is also an astronaut. While he was on a six-month mission on the space station in 2009, he noticed his vision getting worse. He and a crewmate, Bob Thirsk, were both medically trained, and they decided to do something about it.

“We’re thinking to ourselves, are we not physicians?” Barratt said. “So we did ophthalmoscopic exams on one another.” They both found hints of a swollen optic nerve. After NASA sent up more imaging equipment, they discovered the classic VIIP syndrome in one another: the flattening of the eye shape and optic disc edema.

Barratt thinks solving the puzzle of VIIP is going to take testing intracranial pressure in space, even if that means an invasive procedure. One option is an intracranial probe that would be surgically implanted months before flight and allow pressure to be measured at different points during space flight. It could also answer questions about other potential factors, like heightened CO2 levels or the effect of in-flight exercise.

“This is one of those times I think aggressive science is extremely warranted,” Barratt said.

A study published last April tested intracranial pressure during a parabolic flight, which achieves zero gravity for around 25 seconds. A team took advantage of scalp implants that four men had for other medical reasons, and measured pressure at all stages of flight. The results showed an initial spike in pressure, but during zero gravity, intracranial pressure went down. It’s a confusing result, showing the opposite of what was expected.

Barratt draws parallels to a similar conundrum from the 1990s, when it was unclear how the pressure in the heart was affected by space flight. NASA performed an invasive test, inserting catheters in astronauts up into their hearts. The test showed conclusively that blood pressure in veins close to the heart didn’t go up. In fact, it went down.

“We took that risk then, purely for science, and now we’re faced with a similar risk decision,” Barratt said. “But in this case it’s not just a science project, it’s a medical issue, which is arguably our number-two risk in human space flight right now.”

The number one risk remains radiation exposure. According to a radiation detector that flew onboard the Mars Curiosity Rover, a human would be exposed to a minimum of .66 sieverts to get to Mars and back — the equivalent of getting a whole body CT scan every 5-6 days, which would heighten the risk for cancer and other diseases.

Before a human trip to Mars, which NASA says it wants to do achieve by the 2030s, researchers agree that VIIP needs to be understood much better. Mars is a six- to nine-month journey away.

VIIP could be the first sign of greater dangers to the human body from microgravity. “We’re seeing the visual and neural, ophthalmic manifestations of it,” said Barratt. “I’m fairly certain this is a bit more global than that.”

Richard Williams, the chief health and medical officer at NASA, agrees that what we don’t know about VIIP still poses the biggest threat. Ironically, one of the only ways to get more knowledge is spend more time in microgravity. “The longer we stay in space, the more we’re going to learn,” Williams said.

It took about half a year back on Earth, but Phillips’ vision did improve a little. It went from 20/100 to 20/50, and it has remained there for the past 11 years. He can’t pass the DMV eye exam without glasses.

But he and other astronauts say that they wouldn’t trade their time in space for the few points on their eyesight back. Astronaut Michael Lopez-Alegria holds the U.S. record for the most time spent outside a spacecraft, in open space. He wears contacts with a +2.5 correction after his longest trip of 215 days. He called being in microgravity “magical.”

Phillips said that, now, he’s just another 65-year-old with glasses. But before his trip in 2005, he was always used to being the guy with the best vision, the first one in the car to read a street sign.