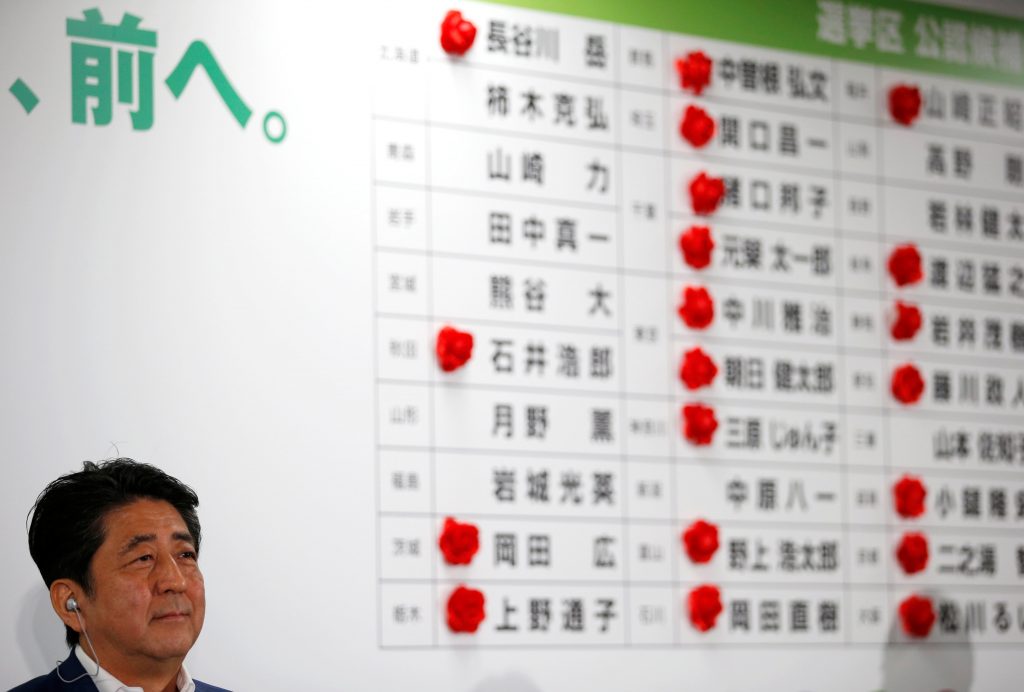 Prime Minister Shinzo Abe’s ruling coalition won a landslide victory on Sunday in an election for parliament’s upper house, despite concerns about his economic policies and plans to revise the nation’s post-war pacifist constitution for the first time.

Media projections showed Abe’s coalition and like-minded parties had won the two-thirds “super majority” needed to try to revise the constitution’s restraints on the military, a step that could strain ties with China, where memories of Japan’s past militarism run deep.

Abe’s Liberal Democratic Party (LDP) also won a simple majority for the first time since 1989, projections showed. That victory will bolster Abe’s grip over the conservative party that he led back to power in 2012 promising to reboot the economy with hyper-easy monetary policy, fiscal spending and reforms.

Any attempt to revise the constitution will still be politically fraught and LDP heavyweights have suggested that amending the pacifist Article 9 would not be the first priority.

Abe told a media broadcaster it was too early to talk about specific revisions to the constitution and his No.2 in the party said separately that talks with the opposition were needed.

“I have two more years to my term (as LDP president) and this is a goal of the LDP, so I want to address it calmly,” Abe said.

In Japan, some financial market players fear trying to amend the constitution could divert Abe’s energy away from reviving the stuttering economy.

“The key question will be whether he can carry out (economic) structural reforms,” said Nobuhiko Kuramochi, chief strategist at Mizuho Securities. “If Abe fails to do so despite the political freedom he has gained, that will be negative for foreign investors’ appetite for Japanese stocks.”

Abe had cast the election as a referendum on “Abenomics.” With signs the strategy is failing, the government plans to compile a post-election stimulus package that could exceed 10 trillion yen ($99 billion).

Abe declined to say how big the package might be. Economists worry the government will choose big-ticket infrastructure projects rather than implement tough structural reforms.

Abe said he would reshuffle his cabinet but did not say when or how. There has been speculation that Abe might replace Finance Minister Taro Aso, 75, among others.

His minister for Okinawa, Aiko Shimajiri, lost her seat, along with Justice Minister Mitsuhide Iwaki.

The loss in Okinawa is a slap at a U.S.-Japan plan to relocate a controversial U.S.-Marines airbase on the island, reluctant host to the bulk of America’s military forces in Japan.

Abe said he had won a mandate for his economic policies in the election, although the assertion could be weakened by low turnout. “We were given approval for our mandate to powerfully pursue Abenomics. We’d like to continue with our efforts to achieve what we’ve promised,” he said to local media.

Kyodo news agency put turnout at about 54 percent, a bit above the record low of 52.61 percent seen in the last upper house poll three years ago.

The opposition Democratic Party linked up with three smaller parties including the Japanese Communist Party to try to stop the pro-constitutional reform camp getting a super majority. Abe’s coalition already has a super-majority in the lower house.

Conservatives see the constitution as a humiliating symbol of Japan’s defeat in World War II. Its admirers consider it the source of post-war peace and democracy. Revising the charter needs the approval of two-thirds in both houses of parliament and a majority in a public referendum.

“We think the constitution is something that puts limits on power, but sadly, that’s not what the LDP’s (revised draft) does,” Yukio Edano, Democratic Party Secretary General, said on local media. “If there is no common agreement on this point, then there is no platform on which we can debate individual articles.”

Surveys show most voters see no need to revise the constitution and the LDP’s dovish coalition partner, Komeito, is reluctant to change its pacifist Article 9. The party’s secretary-general, Yoshihisa Inoue, said on local media that views in the party on possible changes had “not come together” yet.

Still, Abe, whose deeper agenda has long centred on revising the U.S.-drafted charter, may be tempted to push ahead.

“With these numbers … he (Abe) is going to want to see what he can achieve,” said Columbia University professor emeritus Gerry Curtis. “That means less attention to the economy and a lot of spinning over the constitution.”