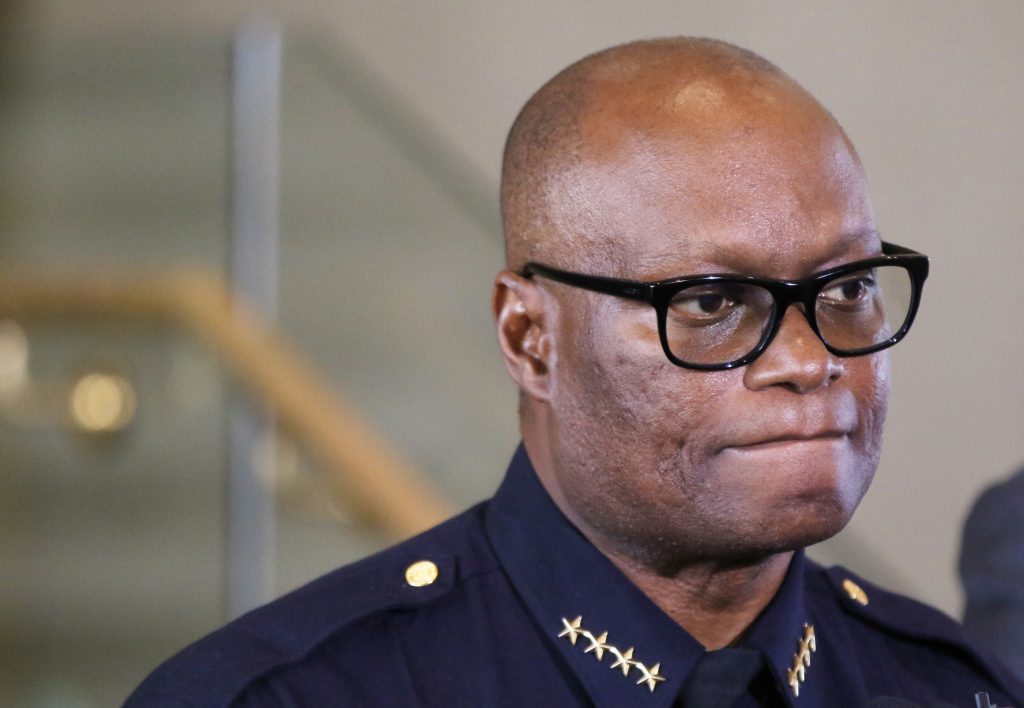 The gunman who fatally shot five Dallas law-enforcement officers appeared delusional, taunted police during extensive negotiations by singing and “laughing at us” and wrote cryptic messages on a wall with his own blood before he was killed by a bomb-equipped robot, Dallas Police Chief David Brown said Sunday.

The shooter, Micah Xavier Johnson, was “determined to hurt more officers” and would have done so if the pound of C-4 explosive carried by the robot had not ended the standoff Thursday, Brown said in an interview on CNN.

The chief also said that, “based on evidence of bombmaking materials and a journal” found at Johnson’s home in Mesquite, Texas, “we’re convinced that this suspect had other plans,” possibly for a larger attack. He said Johnson “had been practicing explosive detonations” and possessed enough materials “to have devastating effects throughout our city and our North Texas area.”

The recent deaths of two African-American men at the hands of police officers in Baton Rouge, Louisiana, and Falcon Heights, Minnesota, may have prompted Johnson “to fast-track his plans” and use a Black Lives Matter protest in Dallas last Thursday as an opportunity to attack police, Brown said.

The additional details of Johnson’s behavior came after a tense night marked by the arrest of a prominent activist in the Black Lives Matter movement and protests in Louisiana and Minnesota that resulted in more than 200 arrests, according to activists and police.

In the CNN interview Sunday, Brown said of Johnson, “I think that this killer obviously had some delusion.” He cited “quite a bit of rambling … that’s hard to decipher” in the journal recovered from his home and said investigators found “some lettering in blood” on a wall in the building where he was killed after apparently being wounded on his way up a stairwell.

“He wrote the letters ‘RB,'” Brown said. “We’re trying to figure out … what those initials mean.”

Brown said Johnson, an Army veteran who served in Afghanistan, apparently used his military training to ambush officers who were trying to stay ahead of a spontaneous, peaceful protest march.

“Officers didn’t know where shots were coming from,” Brown said. “They were in a funnel. And it ended up being a fatal funnel.”

During negotiations that lasted about two hours, Johnson insisted that he would speak only with an African-American police negotiator, Brown said. “And he just basically lied to us, playing games, laughing at us, singing, asking how many did he get and that he wanted to kill some more and that there were bombs there.”

Brown said Johnson was in a position where officers would have had to expose themselves to “grave danger” to get a shot at him. Therefore, he said, he approved a hastily conceived plan to detonate a bomb near the gunman and would “do it again if presented with the same circumstances.”

The Dallas police chief also sought to explain initial confusion that resulted in the arrests of three “suspects” who turned out not to be involved in the shooting.

He said 20 to 30 people, some of them wearing camouflage, showed up at the peaceful Black Lives Matter protest carrying AR-15 rifles and such items as gas masks, ammunition gear and bulletproof vests. “Doesn’t make sense to us,” he said, “but that’s their right in Texas,” where people can legally carry long firearms in public.

Those people “began to run” when the shooting started, Brown said. “For our officers, they were suspects” until any involvement in the deadly sniper attack could be ruled out, he added.

Two of the three detainees were subsequently released, including a woman who was running with people who were armed, Brown said. One man was charged with a misdemeanor because he was not legally allowed to carry a gun, the chief added, without elaborating.

Asked by host Jake Tapper to express his views on whether it was “too easy for individuals to get guns in this country,” Brown demurred, saying that “I wasn’t born last night” and that it was up to “policymakers” to resolve gun-control issues.”

He stressed that Johnson had to be stopped because he was “determined to hurt more officers, and without our actions, he would’ve hurt more officers.” He strongly objected to what he described as second-guessing of the use of a robot-delivered bomb to kill the shooter — apparently a first in a domestic law enforcement case.

“We believe that we saved lives by making this decision,” Brown said, adding that critics were not the ones “on the ground” and putting their lives at risk.

“Officers exposed themselves to draw fire” from the shooter so that other police marksmen could take aim at him, he said. “This is really important … that we applaud the heroism.”