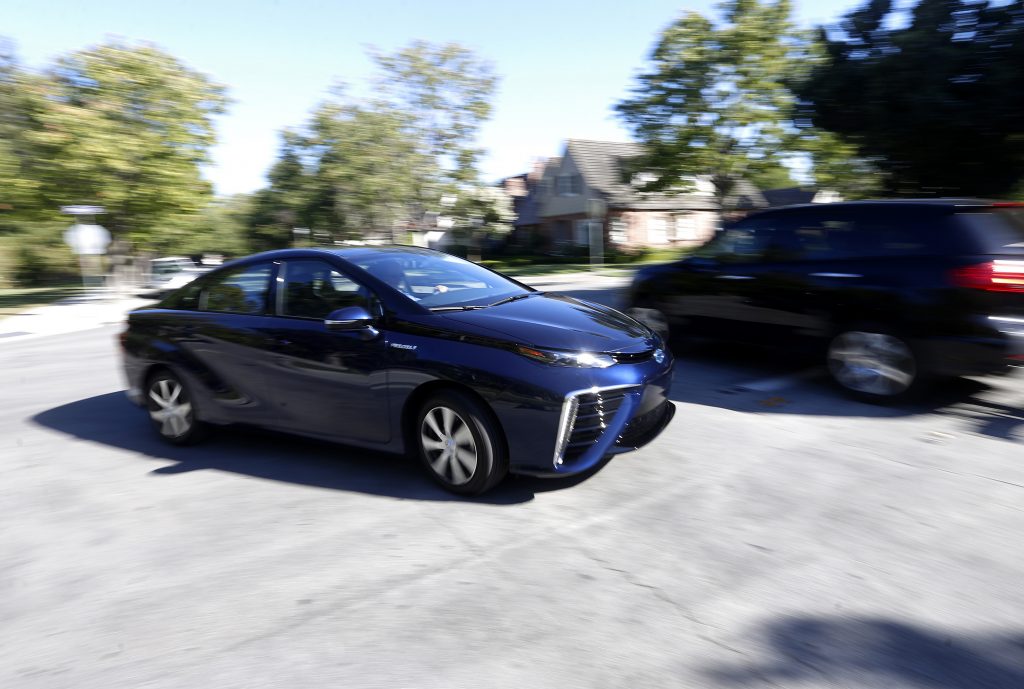 At first or even second glance, it’s hard to tell there’s anything special about Toyota’s new Mirai sedan.

But the Mirai isn’t a typical car. Instead, it’s a fuel-cell vehicle, a kind of eco-friendly car that’s been talked about for years but is rarely seen on regular roads.

That situation may be about to change because the technology has matured and more fueling stations are coming on-line. I got to test drive a Mirai recently and got a sense of the current state of fuel-cell cars. I liked driving it, but it’s pricey and in some ways impractical.

Fuel cells are devices that use a chemical reaction to strip electrons from the hydrogen in some kind of fuel to create electricity. Because the only thing fuel cells emit is water, they’ve been touted for the past 20 years or so as an ideal eco-friendly technology to replace gasoline-powered internal combustion engines in cars. Former California Gov. Arnold Schwarzenegger’s hyping of the so-called hydrogen highway was an early effort to promote fuel-cell vehicles that would use pure hydrogen as fuel.

Despite backing from both the government and major automakers, the market for fuel-cell cars has been slow to take off. It took a while for the technology to mature. Government and corporations fought over who would pay to build hydrogen stations to fuel the vehicles. With few stations available, manufacturers were reluctant to build the cars in large quantities.

But the hydrogen highway is starting to see new life, at least here in California. Consumers can now fuel up at some 20 hydrogen stations around the state, mostly clustered in the Bay Area and Los Angeles. The California Fuel Cell Partnership, an alliance of government agencies, carmakers and other organizations that promote the technology, expects an additional 15 stations to open by the end of the year.

Meanwhile, carmakers have moved beyond small tests of early fuel-cell cars to starting to build and market thousands of more polished vehicles to customers. The Mirai, which first went on sale last fall, is one of the first of this new generation of fuel-cell vehicles.

What’s striking about the Mirai is just how normal it seems. The first generations of Prius stood out because they looked different from other cars on the road. When it debuted, Tesla’s Model S wowed drivers with its sudden acceleration and futuristic features like pop-out door handles and a jumbo center-console screen.

The Mirai has nothing like that. Except for a small “fuel cell” badge on its side, there’s nothing on the outside and little on the inside that marks it as special. For the most part, it looks, feels and drives like a midsize sedan.

That’s not necessarily bad. To attract mainstream shoppers, it’s probably not a bad idea to have a car that seems a lot like what they currently drive. And the Mirai does offer some advantages over other varieties of eco-friendly vehicles.

With its 151-horsepower electric motor, the Mirai feels peppy compared with my Prius. It’s no Model S, but it will get you up to highway speed quickly enough. And the Mirai is wider than my Prius and feels roomier on the inside.

As with other electric vehicles, the Mirai doesn’t directly contribute to greenhouse gases. Although most hydrogen is produced from fossil fuels, experts estimate that even when it is, a fuel-cell vehicle is better for the environment than burning gasoline.

The Mirai will go about 312 miles before it runs out of hydrogen. That’s a similar range to the Model S and much farther than most other battery-powered electric vehicles. But it takes much less time to refuel the Mirai than to charge up a battery-powered car. You can fill its hydrogen tanks in about five minutes; even with a high-powered supercharger, it takes about six times as long to only partially recharge a Model S.

But this is still an early effort when it comes to fuel-cell cars. And the Mirai, as much as it may resemble a regular car, comes up short in significant ways.

For one thing, with a more than $57,000 sticker price, it’s pricey. Federal and state tax rebates can bring the price down by about $13,000, but that’s still far above the average car price.

In California, car manufacturers are throwing in three years of hydrogen fuel with each purchase or lease of a fuel-cell car. But after that, drivers will have to pay for it, and it’s not cheap. Right now, it costs about $14 a kilogram. With 5-kilogram total capacity in the Mirai, that’s a $70 cost every time you fill up, which is right up there with a gas-guzzling SUV.

Even with the growing number of hydrogen stations, they still can be hard to find and fairly inconvenient.

A related problem is that the Mirai’s hydrogen tanks and batteries significantly curtail its usable space. Unlike similar-size cars, the Mirai seats only four people; instead of a fifth seat in the back, it has an armrest. And its trunk space is noticeably smaller than that of comparable cars.

Meanwhile, the infotainment system in the Mirai seems little evolved from the one in my 8-year-old Prius. The menu options are confusing, and it doesn’t support Apple’s CarPlay or Android Auto.

I’m excited about the potential for fuel-cell cars and thrilled that cars like the Mirai are finally hitting the road. But if the Mirai is any indication, they still have some miles to go before they’ll have mainstream appeal.

Likes: Drives like a gasoline-powered car; spacious interior; more than 300-mile range on full tanks; quiet; only tailpipe emission is water; comes with three years’ worth of hydrogen refueling; can be refueled in about five minutes

Dislikes: Pricey, even with tax credits; refueling centers inconveniently located and few in number; hydrogen fuel is expensive, even compared with gasoline; seats only four; trunk space smaller than comparably sized cars; infotainment center difficult to use and doesn’t support Apple CarPlay or Android Auto; available only in California

Price: $57,500 before taxes, delivery charges and processing fee; eligible for up to $13,000 in federal and state tax credits and rebates