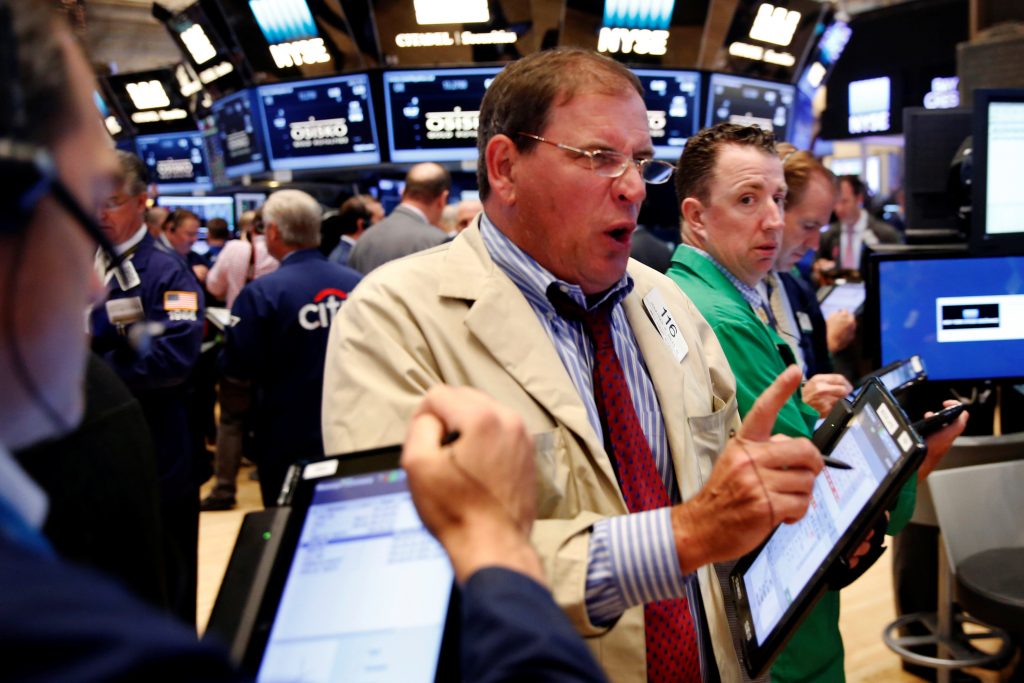 U.S. stocks are lower Thursday afternoon as investors sell utility and phone company stocks, safe-play assets they’ve favored in the wake of Britain’s vote to leave the European Union last month. Energy companies are falling with oil prices and chemical companies are rising. A payroll survey showed that employers hired more workers in June after a slowdown in the months before.

HIRING: Investors are looking at reports showing healthy hiring. A survey by payroll processor ADP said U.S. companies added 172,000 jobs in June, a sign hiring may have picked up again after it slowed down in April and May. ADP’s estimate is based on private companies, and the U.S. government will release its own hiring report on Friday. The government said weekly applications for unemployment benefits fell 16,000 to 254,000 last week, another sign employers continue to hire more workers.

ENERGY: The price of oil rose almost 2 percent in morning trading, but tumbled after the Energy Information Administration said stockpiles remained historically high and didn’t decrease by as much as investors expected. The EIA said crude oil inventories shrank by 2.2 million barrels last week, but analysts expected a drop of 2.6 million barrels, according to S&P Global Platts.

GOLD, BONDS: Bond prices were mixed. The yield on the 10-year U.S. Treasury note rose to 1.38 percent from 1.37 percent. Demand for the 30-year Treasury note grew, however, sending its price higher and its yield down to 2.13 percent from 2.14 percent. Both notes have set all-time lows over recent days.

Gold, which is trading at its highest price in more than two years, inched lower. Silver dropped 45 cents, or 2.2 percent, to $19.75 an ounce.

WHITEWAVE SWEPT UP: Organic food maker WhiteWave Foods jumped after French yogurt giant Danone agreed to buy the company for $56.25 a share, or about $10 billion. The deal would expand Danone’s range of health foods and the U.S. market. WhiteWave gained $8.82, or 18.6 percent, to $56.25.

PEP IN ITS STEP: PepsiCo’s quarterly profit surpassed Wall Street forecasts. The company said customers are buying more of its new products, including drink options that are marketed as healthier or “craft.” It also posted stronger sales of Frito-Lay snacks. Its stock rose $1.98, or 1.9 percent, to $107.90.

BUYING IN BULK: Costco stock gained $7.02, or 4.5 percent, to $163.03, after the investors were pleased with the warehouse club operator’s June sales.