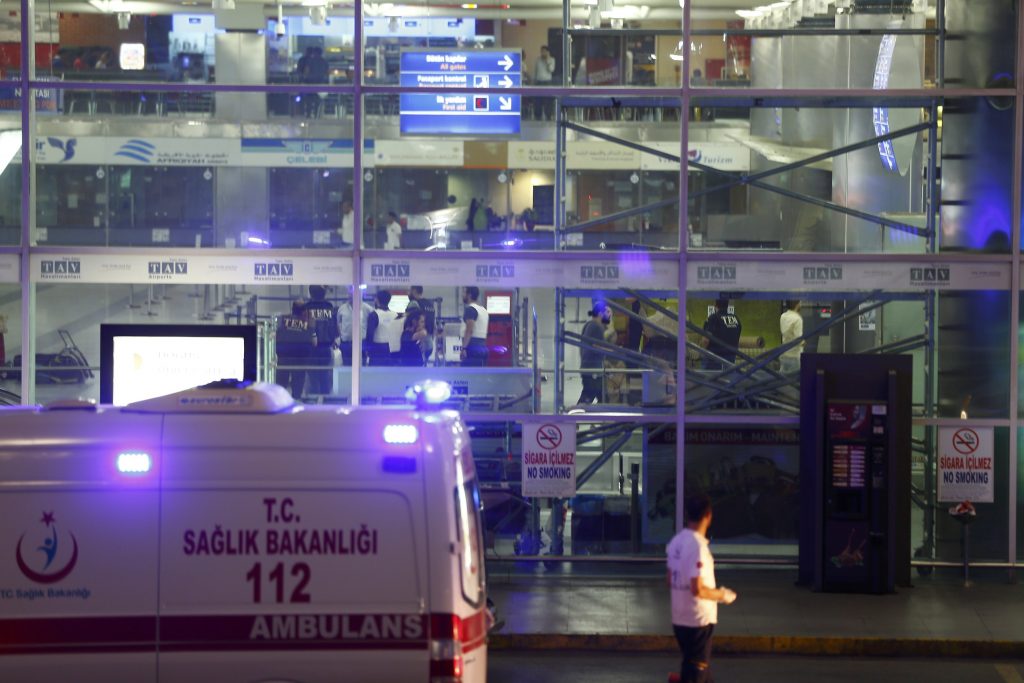 Turkish authorities are seeking two suspected Islamic State terrorists thought to be linked to last week’s Istanbul airport attack and believed to be in hiding near the border with Syria, a Turkish newspaper said on Wednesday.

Turkey has jailed a total 30 suspects pending trial over the triple suicide bombing at Ataturk Airport, which killed 45 people and wounded hundreds, the deadliest in a series of bombings this year in Turkey.

Turkish officials are not commenting on reports about the investigation, although one government official has said the attackers were Russian, Uzbek and Kyrgyz nationals. President Tayyip Erdogan has said Islamic State terrorists from the former Soviet Union were behind the attack.

On Tuesday he described the Sunni terror group as a “dagger plunged into the chest of Muslims.”

The pro-government Yeni Safak newspaper said two Islamic State suspects were believed to be hiding in woodland in the Yayladagi area of Turkey’s southern Hatay province and could be planning to change their appearance and join rebel groups in Syria.

It said they were from Dagestan, a mainly Muslim province of Russia’s North Caucasus region. The paper did not identify its sources for the story.

“Security and intelligence units have taken top level measures in the area to capture the terrorists given the possibility that they could cross into Syria,” it said.

Other members of the same Islamic State team had fled to the Kilis and Gaziantep areas further east and were hiding there, while militants from the Caucasus were using fake identity papers and were receiving support from IS cells, it said.

The Istanbul bombing was followed by major attacks in Bangladesh, Iraq and Saudi Arabia in the past week, all apparently timed for the run-up to Eid al-Fitr, the holiday marking the end of the Ramadan fasting month.

“Daesh is a dagger plunged into the chest of Muslims. Whoever gives support to this group, whether out of sectarian fanaticism or another motive, commits the same sin,” Erdogan said, using an Arabic acronym for Islamic State.

The Kremlin said on Wednesday it believed that the recent attack on Istanbul airport could be a result of Turkish and European security services ignoring Moscow’s signals about suspected “terrorists” hiding in Turkey and Europe.

“Over the past many years, the Russian side … has informed our Turkish and European colleagues that persons suspected of being linked to terrorism … find shelter both in Turkey and in a number of other European countries,” Kremlin spokesman Dmitry Peskov told a conference call with journalists.

“In most cases such signals from the Russian side have not been given proper attention or any reaction by our colleagues. To our regret, these (Istanbul attacks) can be a consequence of such disregard.”