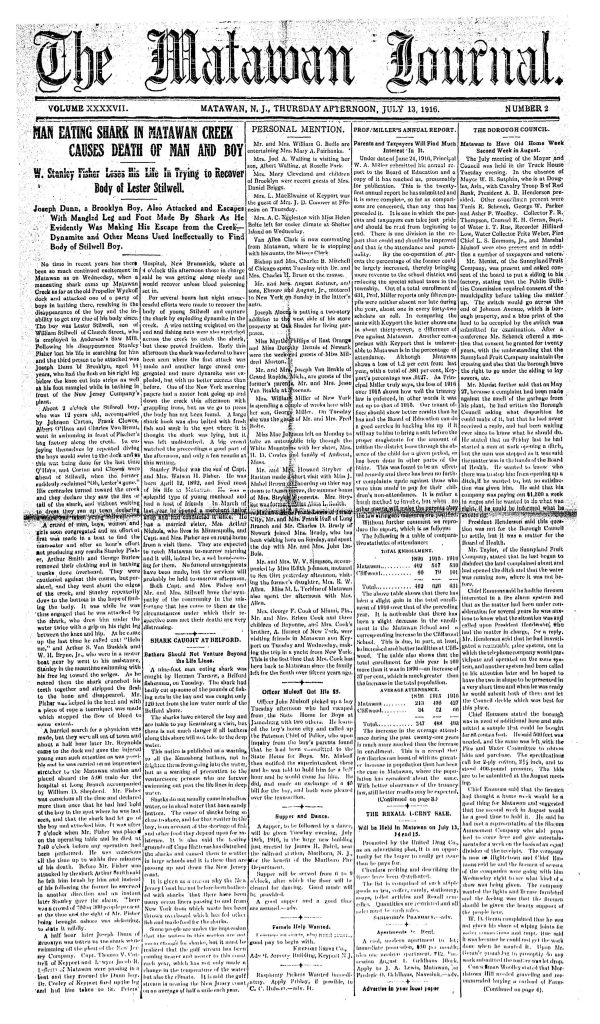 Until the summer of 1916, many scientists believed sharks would never harm humans. That myth was shattered when the first recorded multiple fatal shark attacks left four people dead at the New Jersey shore over a period of 12 days, sparking fears that endure today.

Some thought a sea turtle was to blame when a Philadelphia man died after his thigh was stripped of flesh while he swam in the Atlantic Ocean off Beach Haven on July 1, 1916. Five days later, a bellman at the Essex & Sussex Hotel in Spring Lake died after he was bitten and his legs severed.

Worse was to come.

Talk of the attacks was far from the minds of Matawan residents on a hot and humid July 12. The town was inland from Raritan Bay, which helped feed the tidal Matawan Creek.

Boys like 11-year-old Lester Stillwell liked to swim off the Old Wyckoff Dock, about a mile and a half from the bay, Matawan historian Al Savolaine said.

“‘Look at me, boys, I’m floating,'” Lester said, just as his playmates saw what they thought was a log. Then, they saw a fin lift him out of the water, revealing a bloody mess “as the shark does a number on him and takes him down,” Savolaine said.

Running toward the center of town, the boys shouted, “A shark got Lester!”

W. Stanley Fisher, 24, heard the screams and headed to the creek with friends to recover the body. After nearly an hour, Fisher decided to make one last dive.

“He breaks the surface and shouts he has the body when the shark attacks,” Savolaine said.

About 100 bystanders watched Fisher fight the shark. A friend beat it with an oar before the fish finally released Fisher, having severed an artery near his hip. A tourniquet was applied, and Fisher was placed on a train to a hospital. He was dead in little more than two hours.

A half-mile downstream, the shark latched onto Joseph Dunn’s leg. A tug of war ensued before Dunn was freed, his artery intact.

The next day, as dynamite was dropped into the creek in hopes of raising Lester’s body, Matawan’s acting mayor offered a $100 reward for anyone who “kills the man-eater.”

On July 14, a circus lion tamer who also was a taxidermist caught a shark in a net in Raritan Bay. The shark was opened up, and human flesh and bones were reportedly found inside. The shark was put on display with no firm proof it was the killer, and the reward went to another man who had caught a blue shark.

“From a purely scientific standpoint, a single shark involved in multiple attacks would be a rogue killer. While it does happen on occasion, it was never proven,” said George Burgess, curator of the International Shark Attack File in Florida.

Burgess believes a single great white shark was responsible for the Matawan attacks.

From July 9 through July 17, Matawan’s Historical Society will hold events commemorating the attacks and understanding the role sharks play in the sea. A memorial service will take place at the cemetery where Stillwell and Fisher are buried, and a monument will be unveiled in memory of the victims.

John S. Nichols, 70, of State College, Pennsylvania, will be there to remember Fisher, his great-uncle.

“We’re proud and interested in exactly the role Stanley played,” he said. “It’s a matter of debate whether he was hero or a victim of circumstance.”