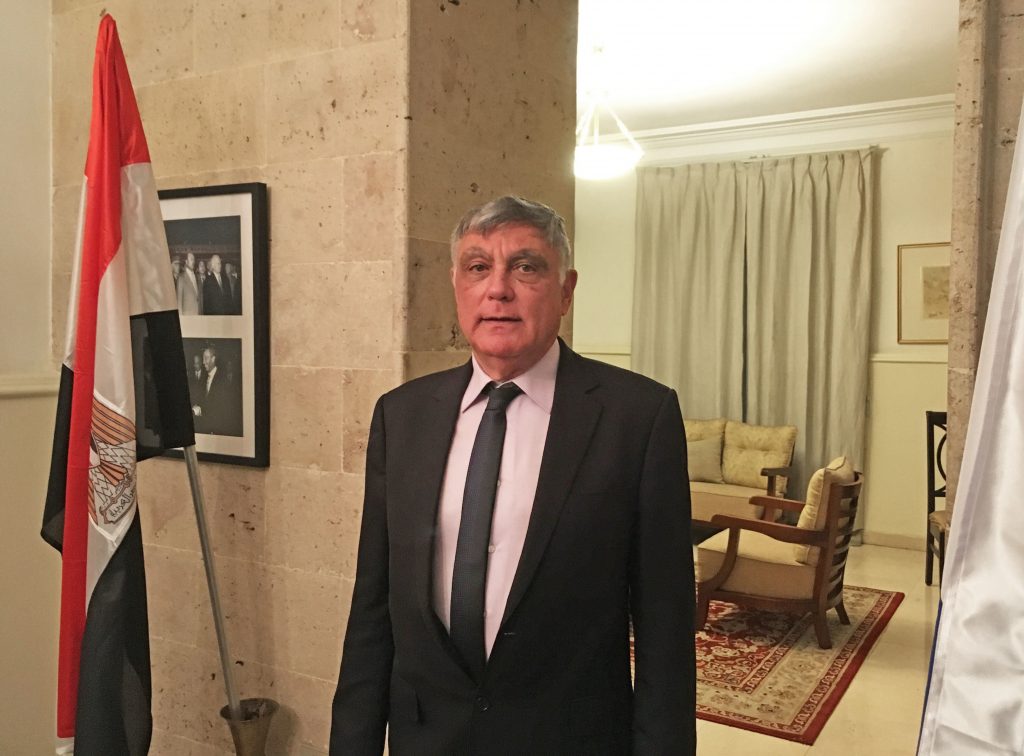 But inside the embassy, which doubles as Ambassador Haim Koren’s residence, you’d hardly notice any of the animosity traditionally felt by the Egyptian masses, for all the upbeat assessments of the future.

“This is one of the best times we’ve ever had” in terms of cooperation between governments, said Koren, a veteran diplomat and fluent Arabic speaker posted here since 2014. “There’s good cooperation between the armies, we have understandings about the Sinai Peninsula, and basically we see (eye-to-eye) on development of the region.”

Israel often praises Egypt’s President Abdel-Fattah el-Sissi for his tough stance on terrorists, and considers him a key ally in what it sees as a shared battled against Islamic extremists.

“We have common enemies in the sense of terrorism, or if you like, radical Islamic terrorism, emerged from the same root no matter if it happens to be Hamas or the Muslim Brotherhood, ISIS, Jabhat al-Nusra or al-Qaida,” Koren said. El-Sissi “understood quickly that we are all in the same boat,” he added.

Israeli military officials believe that despite ideological differences, Hamas in Gaza is cooperating with extremists affiliated with Islamic State or other armed groups in Egypt’s neighboring Sinai region. They praise Egypt’s crackdown on Hamas’ cross-border smuggling tunnels, which had been a main conduit for weapons into Gaza, and say the Egyptian military is doing an admirable job in a fierce battle against IS in Sinai.

But the relationship remains complex. Israel closed its embassy in Cairo during the tumult that followed the 2011 uprising against longtime autocrat Hosni Mubarak, when an angry mob attacked it over the killing of five Egyptian policemen by Israeli forces chasing terrorists in the Sinai. It didn’t reopen its embassy, now at the residence further from the city center, until September 2015.

Leading figures across Egypt’s political spectrum still reject full normalization of Egyptian-Israeli relations, with many professional associations and labor unions banning members from visiting Israel. Last year, the parliament voted to expel a contentious member after he had dinner at the embassy, and in the uproar that ensued, one newspaper published a photo of Koren with devil’s horns superimposed on his head.

Attempts at outreach to the Egyptian people can also backfire: Earlier this year a new Arabic-language Facebook page set up by the embassy was flooded with insults and anti-Semitic comments, with some likening Jews to pigs and others calling them killers over the long-running conflict with the Palestinians — a popular hot-button topic in Arab countries.

“Our aspiration is to come closer to the Egyptian people,” through cultural policy and social media, Koren said. “But we understand that it’s a long process, there’s a long way to go. That’s why the stability of Egypt is important, and also the success of its economy.”

Koren himself ventures outside his diplomatic compound only under heavy guard. His family remains back in Israel, and he frequently returns home.

Spokesmen for the Egyptian Foreign Ministry and presidency did not respond to request for comment on the topic, underlining its sensitivity. But jets carrying Israeli officials arrive regularly at Cairo’s international airport, where the Israelis are sometimes whisked away in official cars.

Egyptians who travel to Israel, even for religious pilgrimages, face scrutiny from their own state security forces, as do persons entering the embassy compound, in the foreigner-friendly suburb of Maadi.

Koren said that despite the successful free trade areas for manufacturing known as QIZ zones, “it’s going very slow” with regard to developing Israeli expertise in sectors that could benefit the Egyptian economy, such as agriculture, irrigation and solar power.

“Media here used to say that we were poisoning the seeds of the vegetables,” for example, he said. Over the years a variety of myths have been perpetrated in the media —including sharks imported by Israel to the Red Sea to scare off tourists.

One boost to the relationship is Israel’s lack of any official commentary on human rights issues, unlike some Western nations or sometimes the United States, Koren said.

“We are not interfering in those domestic issues,” he said. “We don’t think it’s our role to educate or to preach for any kind of way that someone should run Egypt or any other country.”