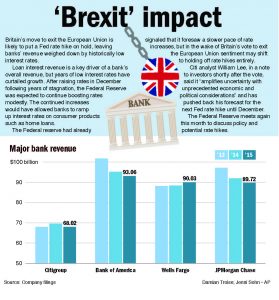 U.S. stocks slumped Tuesday as investors grew fearful over the health of the British financial system. Looking for safety, they flocked to Treasury notes and pushed the yields on long-term government bonds to all-time lows. Energy companies took the biggest losses as oil prices tumbled.

Investors were jolted after three U.K. financial firms stopped trading in their commercial property funds because large numbers of investors were trying to liquidate their holdings.

It was an abrupt end to a big four-day rally for stocks, and a reminder that the effects of Britain’s vote to leave the European Union has left markets deeply unsettled. Answers may be very slow in coming.

“We’ve seen a tremendous rally pretty much every night in longer-term bonds” since the vote, said Tom di Galoma, managing director at Seaport Global Holdings. “There’s just so many unanswered questions both from the legal standpoint, a diplomatic standpoint, an economic standpoint.”

Stocks took a steep two-day plunge last month after Britain voted to leave the European Union. Over the last four days they recovered almost all of the ground they lost after the vote.

On Tuesday the trouble began when Aviva Investors, Standard Life and M&G Investments stopped trading in their commercial property funds. The firms said they were protecting other investors who wished to remain in their respective funds. The Bank of England said it eased bank rules to allow them to lend up to 150 billion pounds ($200 billion) to households and businesses.

According to Tradeweb, the yield on the 10-year and 30-year Treasury notes are both at all-time lows. They’ve tumbled this year as worries about the global economy, the U.S. Federal Reserve and now Britain have investors craving safety.

Chemical and mining companies also took large losses. But the types of stocks that are generally considered the safest all traded higher. Those included household goods companies. Clorox rose $2.08, or 1.5 percent, to $139.24 and Coca-Cola gained 31 cents to $45.43. Also rising were phone and utility companies.

A majority stake in Hostess Brands, the company that makes Twinkies and Ding Dongs, is being acquired by Gores Holdings. Gores will pay $375 million in cash and commit another $350 million in the deal. Hostess filed for Chapter 11 bankruptcy protection four years ago. Gores Holdings is an acquisition company run by the private equity firm Gores Group. The holding company’s stock rose 23 cents, or 2.4 percent, to $10.01.

Insys Therapeutics climbed after the Food and Drug Administration approved its drug Syndros, a synthetic version of THC, a component of marijuana. Syndros is intended to treat severe weight loss in AIDS patients and nausea and vomiting in chemotherapy patients. The stock jumped 93 cents, or 7 percent, to $14.40.