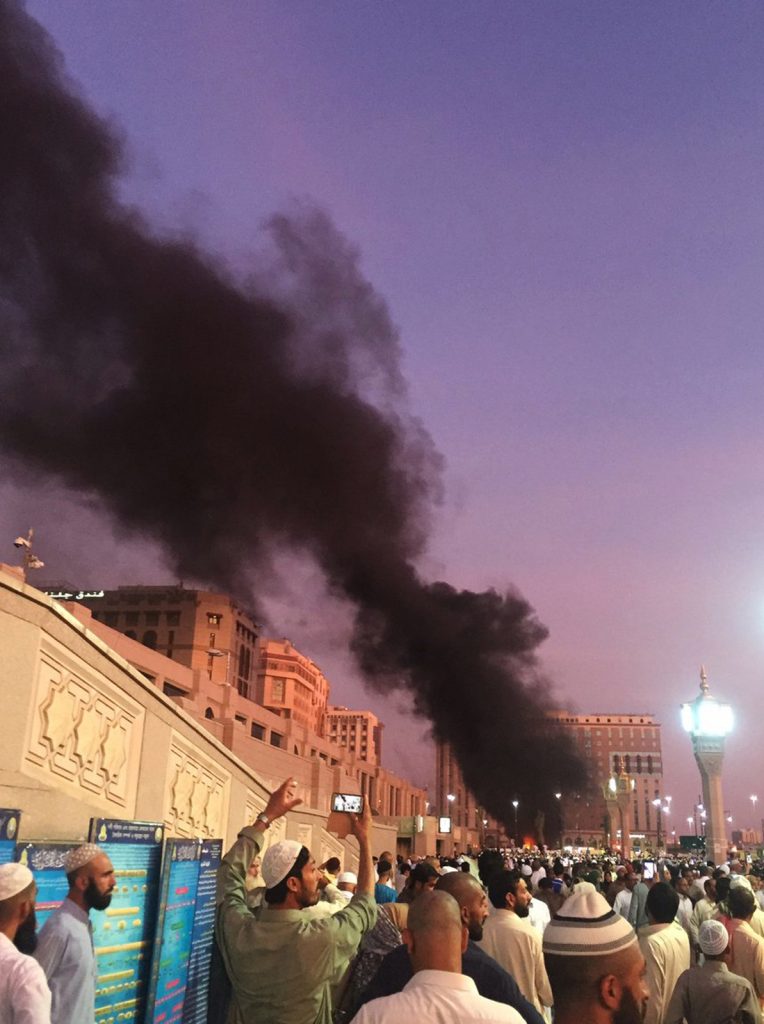 Saudi Arabia on Tuesday identified the suicide bomber, who struck outside one of Islam’s holiest sites the day before, as a Pakistani resident of the kingdom who arrived 12 years ago to work as a driver.

The suicide bombing Monday outside the sprawling mosque grounds in the western city of Medina killed four Saudi security troops and wounded five. Millions of Muslims from around the world visit the mosque every year as part of their pilgrimage.

The governor of Mecca, Prince Faisal bin Salman, who is a son of King Salman, was shown on state media visiting security officers wounded in the blast and the site of the explosion, within hours of the blast.

No group has yet claimed responsibility for the Medina attack or two other attacks in the kingdom on the same day — one near the U.S. Consulate in Jeddah and the other at a Shiite mosque in the east of the country. The nature of the attacks and their apparently coordinated timing suggested the Islamic State terror group could be to blame.

An Interior Ministry statement issued on Tuesday identified the man as 34-year-old Abdullah Qalzar Khan. It said he lived in the nearby Red Sea port city of Jeddah with “his wife and her parents.” The statement didn’t elaborate.

The Saudi ministry said the attacker set off the bomb in a parking lot after security officers raised suspicions about him. Several cars caught fire and thick plumes of black smoke were seen rising from the site of the explosion as thousands crowded the streets around the mosque.

The ruling Al Saud family derives enormous prestige and legitimacy from being the caretakers of the hajj pilgrimage and Islam’s holiest sites in Mecca and Medina. The attack may have been an attempt to undermine the Saudi monarchy’s claim of guardianship.

Saudi Arabia is part of the U.S.-led coalition fighting the Islamic State terror group in Iraq and Syria, and the  group views its ruling monarchy as an enemy. The kingdom has been the target of multiple attacks by the group that have killed dozens of people. In June the Interior Ministry reported 26 terror attacks in the last two years.

In 1979 extremists took over Mecca’s Grand Mosque, home to the cube-shaped Kaaba, for two weeks as they demanded the royal family abdicate the throne.

Last year, the Saudi government was accused of gross negligence by regional foes, primarily Iran, after a crush of pilgrims during the annual hajj killed at least 2,426 people and a crane collapse over the Grand Mosque killed 111 people.

Also Monday evening, at least one suicide bomber and a car bomb exploded near a Shiite mosque in eastern Saudi Arabia, several hours after a suicide bomber carried out an attack near the U.S. Consulate in the western city of Jeddah.

The attack in the eastern region of Qatif did not appear to cause any injuries, said resident Mohammed al-Nimr. Qatif is home to many Shiites, a minority in the Sunni-dominated kingdom.

The Interior Ministry said it was working to identify the remains of three bodies at the site of blast, suggesting there may have been three terrorists.

Earlier Monday, near the U.S. Consulate in Jeddah, a suicide bomber detonated his explosives after two security guards approached him, killing himself and lightly wounding the two guards, the Interior Ministry said.

No consular staff were wounded in the attack.