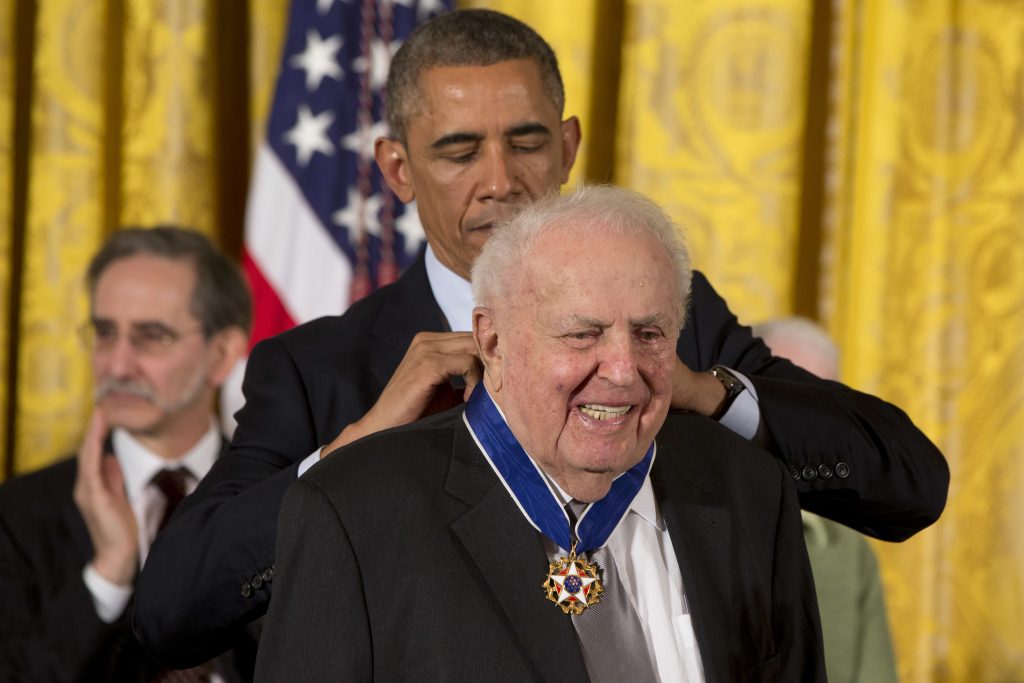 Abner Mikva, an influential liberal from Illinois who served in all three branches of government as a congressman, federal judge and adviser to President Bill Clinton, has died. He was 90.

Mikva died Monday of cancer in hospice care at Rush University Medical Center in Chicago, Brian Brady, national director of Mikva Challenge, told The Associated Press on Tuesday. Mikva Challenge is a nonprofit leadership organization that the statesman founded. Brady said he learned of the death from Mikva’s daughters.

Mikva was diagnosed with bladder cancer several months ago, but had remained “strong and active” until a couple of weeks ago, according to Steven Cohen, who is married to Mikva’s oldest of three daughters, Mary.

Cohen said the family thinks it is “fitting he died on the Fourth of July” because he was a “true patriot and had a flair for doing things in a historic way.”

A stalwart of Illinois’s political landscape for decades, Mikva most recently pushed for the U.S. Senate to consider the nomination of Supreme Court nominee Merrick Garland. Brady called Mikva “the ideal public servant,” who was saddened by growing bitter animosity between the parties in Washington.

“He thought it had a lot to do with people not socializing together anymore,” Brady said of partisan rancor. “He had dinner and played [games] two or three times a week with Republican leaders. He thought the days of real relationships don’t exist right now.”

Mikva often told of how he initially tried to get involved in Chicago politics in 1948 but was told: “We don’t want nobody nobody sent” – an anecdote that came to encapsulate the city’s often-corrupt patronage system.

U.S. Sen. Dick Durbin of Illinois, a fellow Democrat, said Mikva’s record of public service “was proof that the good guys can win without selling their souls.”

“Ab Mikva was the pol ‘nobody sent,’ but Illinois and America are better today because he defied the bosses and rallied thousands to beat them,” Durbin said in an emailed statement.

President Barack Obama has said Mikva was one of his political mentors, and awarded him the Presidential Medal of Freedom in 2014.

“No matter how far we go in life, we owe a profound debt of gratitude to those who gave us those first, firm pushes at the start,” Obama said Tuesday in a statement. “For me, one of those people was Ab Mikva. When I was graduating law school, Ab encouraged me to pursue public service.

“He saw something in me that I didn’t yet see in myself, but I know why he did it – Ab represented the best of public service himself and he believed in empowering the next generation of young people to shape our country.”

Chicago Mayor Rahm Emanuel, who worked with Mikva in the Clinton White House, also expressed condolences Tuesday, saying in a statement: “Throughout his career, Abner fought for unpopular decisions and for those whose voices needed to – but could not – be heard.”

Mikva, who was born in 1926 in Milwaukee to Yiddish-speaking Ukrainian immigrants, described his family’s economic hardship during the Great Depression to the Chicago Daily Law Bulletin in 2012, saying his father was often unemployed and that the family relied on welfare.

“We all wore the same blue wool caps and big bulky shoes and same jackets,” he said. “So everybody knew if you were on relief.”

Mikva was elected in 1956 to the first of five consecutive terms in the Illinois General Assembly, where he sponsored legislation for fair employment practices and open housing, and labored to overhaul the Criminal Code. He was elected to the U.S. House in 1968 and served for five terms as a member of the Judiciary Committee and then the Ways and Means Committee.

Cohen said he’ll always remember Mikva’s optimism during a particularly close race for Congress in 1974. As the election returns came in, Mikva never wavered in optimism and his belief in “democracy in action.”

“He was sitting on a dining room chair, in the living room,” Cohen recalled. “We were all incredibly nervous. Everybody was beside themselves, but he stayed strong and focused.”

Appointed by President Jimmy Carter to the U.S. Court of Appeals for the District of Columbia, Mikva served 15 years, the last four as Chief Judge. Supreme Court Justice Elena Kagan clerked for Mikva during his time at the appeals court.

After Obama graduated from law school, Mikva offered the future president a job as a clerk, though Obama declined. In 1994, Mikva resigned from the bench to become White House counsel to Clinton.