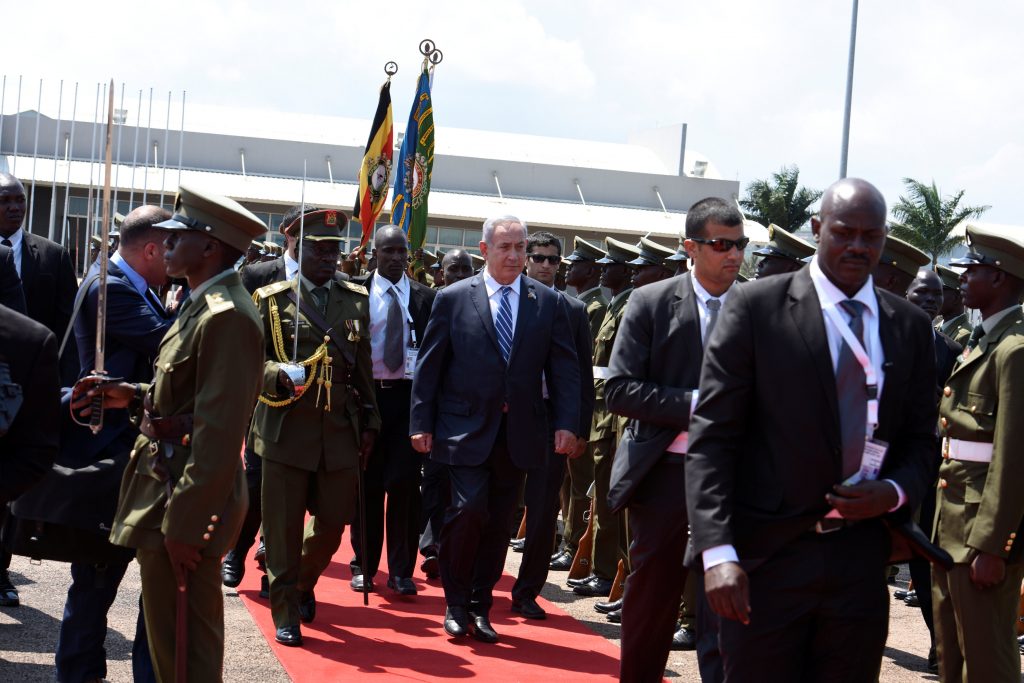 Prime Minister Binyamin Netanyahu said his country’s raid on Uganda’s Entebbe airport 40 years ago, in which his brother was killed, “changed the course” of his life.

Yonatan Netanyahu was shot dead as he was helping the Israeli hostages who had been held inside the airport’s old terminal back onto the plane. His death made Yonatan an Israeli hero, and thrust Netanyahu toward public life.

Speaking shortly after his arrival in Uganda, Netanyahu praised Israel’s commando raid on the airport which freed Israeli hostages from a hijacked plane. “International terrorism suffered a stinging defeat” from the mission in July, 1976, he said.

Netanyahu traveled to Uganda with soldiers and pilots who were members of the rescue team.

Netanyahu’s visit to Uganda starts his four-nation tour of Africa.

Ugandan President Yoweri Museveni said his government opposes the “indiscriminate use of violence” as well as bigotry. He said Uganda’s government supports a two-state solution to the conflict between Israel and Palestine.

“The two of you belong to that area,” Museveni said, urging both sides to live “side by side in two states … in peace and with recognized borders.”

Later on Monday Netanyahu will attend a summit of regional leaders focusing on security.

In exchange for its expertise in security and other fields, Israel wants African states to side with it at the U.N., where the General Assembly overwhelmingly recognized Palestine as a nonmember observer state in 2012. The Palestinians have used their upgraded status to launch a diplomatic offensive against Israel and its occupation of lands where the Palestinians hope to establish a future state.

Israel also has a shared interest with the four African countries of confronting Islamic terrorists.

Uganda’s Entebbe Airport, on the shore of Lake Victoria, is where Netanyahu’s brother, Yonatan, was struck by a bullet as he led Israeli commandos in a daring rescue mission to rescue hijacked Israeli passengers. Israel’s success in the raid humiliated then-Ugandan President Idi Amin.

Four decades later, Uganda has good relations with Israel, which is courting allies to counter the Palestinian Authority’s rising influence at the United Nations. While in Uganda, Netanyahu will also attend a security-themed summit of regional leaders, including those from Kenya and Tanzania, said Don Wanyama, a spokesman for Uganda’s president.

At Entebbe, there was a formal ceremony to commemorate the anniversary of the Israeli rescue mission and Netanyahu was given a tour of the airport’s control tower. A state dinner honoring Netanyahu was on the agenda for the evening, before he leaves for Kenya.

Although the July 1976 rescue mission breached Uganda’s territorial integrity, Amin, who had taken power by force and ruled as a dictator, had become an increasingly isolated figure and would soon be forced out of power with the help of Tanzanian forces. Ugandan President Yoweri Museveni himself led one of several exile groups that waged a guerrilla war against Amin.

A lingering loathing of Amin, who was accused of many human rights atrocities and who died in Saudi Arabia in 2003, is one reason why many Ugandans today do not see the success of the Israeli raid — in which many Ugandan soldiers were killed and military equipment destroyed — as a disaster for Uganda. Yonatan was shot dead as he was helping the Israeli hostages who had been held inside the airport’s old terminal back onto the plane. His death made Yonatan an Israeli hero, and thrust Netanyahu toward public life.

Still, some Ugandans say Netanyahu’s historic visit should be a moment to mourn the Ugandan victims of the operation. Moses Ali, Uganda’s deputy prime minister who served as a government minister under Amin, told Uganda’s Daily Monitor newspaper that the rescue mission should not be celebrated by Ugandans.

“If you are siding with Israelis, then you can celebrate because it was their victory,” he said. “If you are not, then you should be mourning our dead ones.”

Netanyahu will also be visiting Kenya, Rwanda and Ethiopia this week.

“Israel has been on a mission to repair its image globally, and more specifically within the U.N. where the Africa group has for decades now supported the Palestinian cause, and vote in general towards that end,” said Angelo Izama, a Ugandan analyst who runs a think tank called Fana Kwawote.

As a key U.S. ally on regional security, especially in violence-prone Somalia, Uganda is an attractive ally for Israel as well, according to Izama.

“Washington views the Museveni administration as a regional hegemon, a key to the security of the wider region. Uganda’s involvement in counter-terrorism in Somalia … and its significant expenditure on security goods, including arms and technology, are another reason” for Netanyahu’s visit, he said.